Posted on September 24, 2014 by David Carroll Posted in Pleading the Sixth

Pleading the Sixth: On September 23, 2014, the American Civil Liberties Union (ACLU) filed a complaint in U.S. District Court alleging that Scott County, Mississippi routinely detains felony defendants pre-trial without bail while failing to appoint counsel until after formal indictment which, at best, does not occur until three to five months after arrest. However, a new report by the Mississippi Office of the State Public Defender, with the assistance of the 6AC, points the way to reforming the right to counsel services in that state.

“This is indefinite detention, pure and simple,” stated ACLU staff attorney, Brandon Buskey, in a press release announcing the filing of a class action complaint on September 23, 2014, against Scott County, Mississippi, alleging that poor people accused of crime are routinely held in jail without bail or a lawyer until several months after arrest when a formal indictment is filed. And, because a case may not be presented to or acted on by a grand jury without such a formal indictment, the class action lawsuit alleges that an indigent accused could potentially be incarcerated indefinitely waiting for his constitutional right to a lawyer. Scott County operates a de facto “Constitution-free zone,” states Buskey, in which detainees are thrown into a “legal black hole,” though they have never formally been charged with a crime.

If the facts alleged by the ACLU are true, it begs a much deeper question: how can people be detained indefinitely in 2014 America without their Sixth Amendment right to a lawyer? Answering that question begins with an understanding of the structure of indigent defense services in Mississippi.

Mississippi is one of only six states that do not contribute any money for non-capital, trial-level right to counsel services (the others are Arizona, California, Pennsylvania, South Dakota, and Utah). Instead, local government must shoulder the entire burden of providing public attorneys to the accused. Unlike many states where municipal courts only hear local ordinance violations, Mississippi’s 246 municipal courts adjudicate misdemeanors and hold preliminary hearings on felonies. This makes cities and towns a primary funder of right to counsel services. So, instead of a single budget presentation made to the state legislature, Mississippi public defense providers must engage in budget debates in over 300 locations across the state (adding together the total number of municipalities and counties).

Local governments, however, have significant revenue-raising restrictions placed on them by the state while being statutorily prohibited from deficit spending. There are three revenue sources available to local government: real estate taxes; fees for permits/services; and assessments on ordinance violations, traffic infractions and criminal convictions. But, because of the state of Mississippi’s low tax burden, local governments must rely 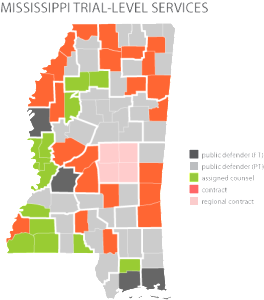 more heavily on unpredictable revenue streams, such as court fees and assessments, to pay for their criminal justice priorities. (For more on the problems with county funding of indigent defense, see the 6AC two-part article in the National Association of Counties, County News July 2014 publication, here and here.)

It comes as no surprise then that more and more Mississippi counties have resorted to flat fee contracting in which an attorney is paid a single flat fee to take an unlimited number of cases. Attorneys working under fixed rate contracts are generally not reimbursed for overhead or for out-of-pocket case expenses, such as mileage, experts, or investigators. In short, the more work an attorney does on a case, the less money that attorney would make, giving attorneys a clear financial incentive to do as little work on their cases as possible. Contract defender services are the predominant delivery model in Mississippi (29.27%, or 24 of 82 counties).

The wide variation in indigent defense services extends to funding. Totaling all sources of indigent defense funding (local, county, and state), approximately $13,370,000 is expended on indigent defense annually in Mississippi, or a per-capita cost of $5.52. Compare this, for example, with another rural state, like West Virginia, that spends $23.00 per capita. But again, Mississippi’s funding is derived locally, so what really matters most is not the statewide average, but rather how much is spent in a specific jurisdiction. A new report (discussed below) indicates that the subject of the ACLU lawsuit, Scott County, spends just $1.45 per capita annually to uphold the constitutional right to a lawyer through a regional contract program. Is it any wonder that people are allegedly being willfully detained without access to a lawyer?

So When Must Counsel Be Made Available?

In Rothgery v. Gillespie County, the United States Supreme Court set out the parameters of when counsel must be appointed, noting that the right to counsel attaches when “formal judicial proceedings have begun.” Specifically, the right to counsel attaches at “a criminal defendant’s initial appearance before a judicial officer, where he learns the charge against him and his liberty is subject to restriction.”

In the ACLU lawsuit, each of the named plaintiffs have clearly have had their judicial proceedings initiated at a court appearance at which bail is set and the defendant’s liberty is “subject to restriction.” For example, a Mr. Burks is described as having been arrested on November 13, 2013 for a felony and had his initial appearance in court the same day. The judge, according to the ACLU complaint, set a $30,000 bail “without any individualized hearing or consideration of the bail factors required under state or federal law, including ability to afford bail and the appropriateness of nonmonetary bail options.” Unable to afford bail, Mr. Burks was remanded to jail where he remains to this day – 316 days later – never having been indicted or given access to a lawyer. This, despite filling out an affidavit of indigency at the initial appearance and having been determined to be eligible for a Sixth Amendment attorney in December of the same year.

Is this what Rothgery intended? Unfortunately, the Supreme Court has never clearly set out a specific formula for how or how quickly counsel should be appointed once the right to counsel has attached. What Rothgery makes clear is that there is a moment when the right to counsel attaches, as it does at initial appearance in Mississippi, and “counsel must be appointed within a reasonable time after attachment to allow for adequate representation at any critical stage before trial, as well as at trial itself.” (Emphasis added.)

Is ten months in jail, or indefinite detention, without a lawyer “reasonable”? It cannot be – not when delay in appointing a lawyer has such negative consequences for the client, as promising investigative leads can go cold, witnesses can become harder and harder to track down, and memories fade.

(For a full detailing on a state’s responsibility under Rothgery, see the 2014 6AC and Pre-Trial Justice Institute on the subject, here.)

In 2011, the state legislature took initial steps toward state oversight of indigent defense services by establishing the Mississippi Office of the State Public Defender (OSPD). OSPD combined the previously existing state Office of Indigent Appeals and the Office of Capital Defense Counsel into one administrative unit. In addition to providing the direct client-representation services for which the two newly merged offices were previously responsible, the legislature also mandated that this new office examine the delivery of trial-level indigent defense services across the state. Specifically, the OSPD is to “coordinate the collection and dissemination of statistical data” and to “develop plans and proposals for further development of a statewide public defender system in coordination with the Mississippi Public Defenders Task Force. With no state resources dedicated to the task at hand, OSPD retained the assistance of the 6AC (initially under a grant from the American Bar Association, and then under a grant from the United States Department of Justice, Bureau of Justice Assistance) to assist with the research and technical assistance. 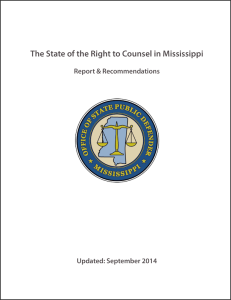 Though the comprehensive report, The State of the Right to counsel in Mississippi: Report and Recommendations, has been privately discussed amongst state and local policymakers and criminal justice stakeholders in Mississippi for months, the report is now being released widely.

The report makes three significant findings. First, and as described above, there is no consistency in how indigent defense services are delivered throughout Mississippi and funding levels vary greatly among counties. Second, Mississippi is out of step with its neighboring states that have relieved local governments from the administration and funding of public defense services. Indeed, Mississippi is classified nationally as having public defender services that are more analogous to California, New York and Pennsylvania than to its neighbor states of Alabama, Arkansas, Louisiana, and Tennessee. Third, cost efficiencies are to be had by moving to staffed public defender offices in those jurisdictions where caseloads merit one while still having the involvement of the private bar.

OSPD therefore recommends that Mississippi create an independent, statewide indigent defense commission to oversee OSPD and with authority to promulgate standards all across Mississippi. The state should then empower OSPD to oversee the implementation of standards through, at first, administering contracts and other existing indigent defense services for felony representation, and then expanding such oversight to other types of representation down the road. And, in order to prevent making the financial burden in the future too hard on either the counties or the state, OSPD recommends that counties’ current spending levels be capped or directed to spend up to some state-defined average, with all new monies being the responsibility of the state.

The 6AC will keep continue to keep you apprised as reforms progress.