Posted on February 22, 2013 by David Carroll Posted in Pleading the Sixth

Pleading the Sixth:  In March 1931, a fight broke out between a group of seven white boys and a larger group of black teenagers aboard a train.  When almost all of the white teenagers were thrown off of the slow-moving train, word was sent up ahead to detain the train when it reached Scottsboro, Alabama. There, two white girls claimed that they had been raped by six of the black youths.  The case of the so-called “Scottsboro Boys” eventually reached the U.S. Supreme Court setting the stage for one of the first great right to counsel cases in our nation’s history. Now, 82-years later, the Alabama legislature is taking action to finally exonerate the defendants.

On February 4, 2013, the Associated Press reported that four Alabama legislators (two Republicans and two Democrats) are working to change the state’s law to allow for posthumous pardons in an effort to exonerate the African-American youths accused and convicted of rape in the 1930’s and that have been collectively referred to as the “Scottsboro Boys.”  (Click here for the 6AC’s history of the “Scottsboro Boys.”)  When their case reached the U.S. Supreme Court (in the case of Powell v. Alabama), the Court decided that their attorneys were so unqualified that the representation the defendants received was effectively the same as if they had received no representation at all. (Click here for the 6AC’s explanation of Powell v. Alabama.)

The Alabama legislative resolution describes the Scottsboro Boys as “victims of a series of gross injustice.”  For example, after the U.S. Supreme Court ordered new trials in Powell v. Alabama, the Scottsboro Boys were again convicted despite one of the alleged victims recanting her story and saying she was never raped.  A companion bill would allow the state parole board the authority to issue posthumous pardons.

One of the bill’s sponsors, Senator Arthur Orr (Republican), stated in the Prattville Progress that it is important to 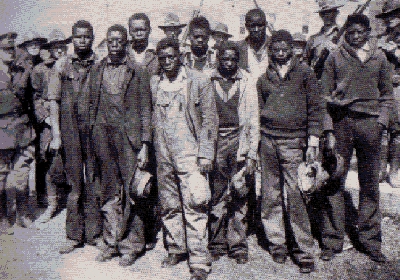 acknowledge “on behalf of the state that these individuals were wrongly convicted and wrongly imprisoned in a very hostile environment … I think it’s an important step to show that the Alabama of the 21st century is a different place than it was 80-plus years ago.”  On February 21, 2013 the Montgomery Advertiser reported that the resolution and bill passed the Alabama Senate on a unanimous 29-0 vote.