Posted on October 25, 2012 by David Carroll Posted in Pleading the Sixth

Pleading the Sixth: A 2011 report by the United States Department of Justice, Bureau of Justice Statistics concludes that the public defender model provides better, more cost-efficient representation than the assigned counsel model.  In a companion piece, the same argument is put forth by two independent research organizations studying indigent defense services in Texas. The Sixth Amendment Center read all three reports and reached a very different conclusion.

In 2011, the U.S. Department of Justice, Bureau of Justice Statistics (BJS) published the report Who’s Better at Defending Criminals? Does Type of Defense Attorney Matter in Terms of Favorable Case Outcomesthat purports to show that public defenders secure similar adjudication and sentencing outcomes for their clients as privately retained attorneys, but that defendants with assigned counsel “receive less favorable outcomes compared to their counterparts with public defenders.”

The Sixth Amendment Center takes no issues with the soundness of the significant amount of data-mining and number-crunching that went in to this report, the thoroughness and accuracy of the research, or even the conclusion to the 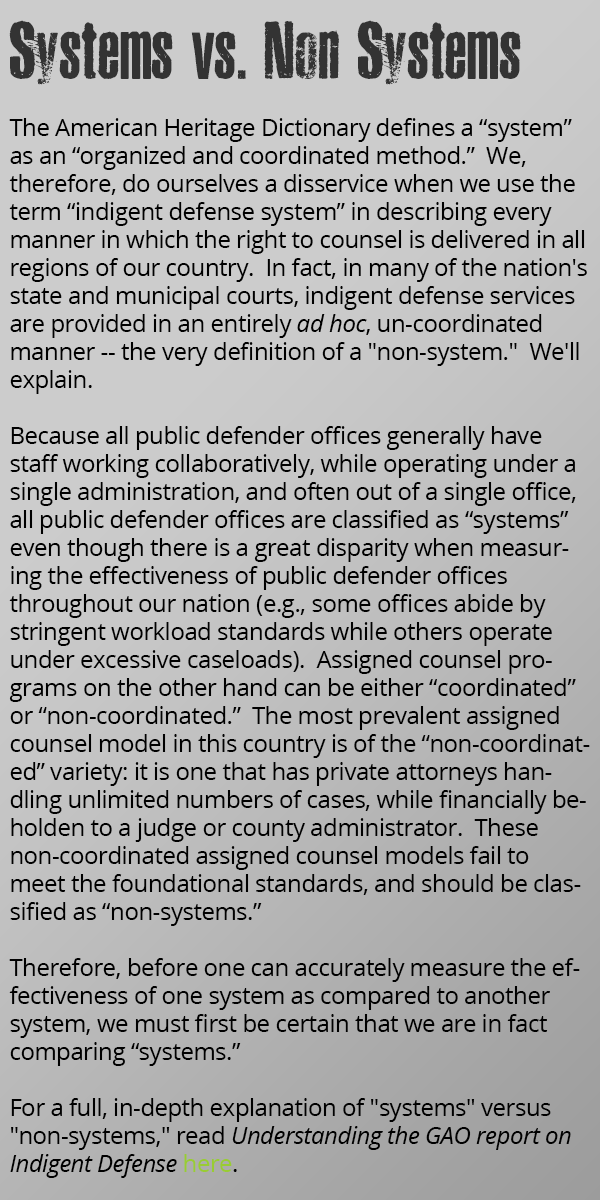 The data set that was used for the BJS study came from 2004 and 2006 court information from the 75 most populated counties. At the time the data was collected those counties without public defender offices were some of the most notoriously deficient systems in the country in regards to the ABA Ten Principles (e.g., Harris County, TX (Houston), Wayne County, Michigan (Detroit), etc.).  Contrastingly, many of the public defender offices in the study are those that are held up as national models for meeting the majority of the American Bar Association, Ten Principles of a Public Defense Delivery System (e.g., King County, Washington (Seattle); Miami-Dade County, Florida; Santa Clara County, California (San Jose); Philadelphia County, Pennsylvania; and San Francisco County, California; to name a few).

Even in those counties with functioning public defender offices, it was often the case that the assigned counsel conflict panels in those same counties were systemically deficient (e.g., by 2006 the Clark County, Nevada (Las Vegas) public defender office was significantly on the way to meeting the ABA Ten Principles but it would not be until 2008 that the conflict panel obtained independence from the judiciary and began meeting other of the ABA Principles.)

The BJS study can only be used to validate the point that defendants who receive coordinated services through a “system” received better outcomes than those who receive services from a deficient “non-system” – especially when the coordinated public defender offices meet the ABA Ten Principles.