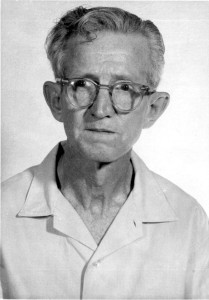 On March 18, 2013, we celebrate the 50th anniversary of the United States Supreme Court’s watershed ruling for the right to counsel: Gideon v. Wainwright.  There, the U.S. Supreme Court declared it an “obvious truth” that anyone accused of a crime and who cannot afford the cost of a lawyer “cannot be assured a fair trial unless counsel is provided for him.”  Under our Constitution, therefore, government has a “fundamental and essential” obligation — a promise — to provide meaningful access to zealous and effective representation in criminal matters for anyone who can’t afford the cost on his own. Unfortunately, here we are, now fifty years later, and this promise is still not fulfilled.

A sampling of the past week’s news stories, editorials, and opinion pages (see side bar) would lead one to believe this 50th Anniversary is cause for no celebration at all. That those who value the Constitution and the rights of all people — rich or poor — should mourn the state of the right to counsel.

But we at the Sixth Amendment Center choose to remain optimistic.  Time and again, the U.S. Supreme Court has set precedent in a landmark case and then it has taken time, courage and fortitude of countless advocates to make the promise of that decision meet the reality of day-to-day existence.  Did racial discrimination in education end or begin with Brown vs. the Board of Education?  Though Brown too is not fully implemented today, there is little doubt that we are much closer to meeting its promise than we were sixty years ago.  As Martin Luther King, Jr. once stated, “[t]he arc of the moral universe is long, but it bends toward justice.”

The march toward Gideon’s promise is indeed long, and there is much room for improvement, but each year, more and more states and counties bend toward justice by undertaking efforts to reform the right to counsel.  During the 40th anniversary of Gideon, would we have dared to think that ten years later we would be talking about public defender offices being created in Houston, Texas and Birmingham, Alabama?  Or, that the Louisiana legislature would choose to eliminate the local judiciary from the oversight of public defense services in favor of an independent statewide commission?  In 2003, Maryland was enmeshed in one of the country’s worst caseload crises, and now they have resources to provide counsel at arraignments and bail review hearings.

This year, the Governor of Montana proposed a biennium budget for the state public defender of $53.6 million (annual budget of $26.8 million).  A decade ago, Montana had a Balkanized, county-based system that spent, on average, $11 million annually.  North Dakota, Maine and South Carolina all moved to statewide systems within the past ten years.  The State Supreme Court in Washington has adopted caseload standards, while the Supreme Court in Nevada set performance standards and removed undue judicial interference in that state. And, statewide agencies in New York and Texas are awarding significant grants to improve right to counsel services in those states.  Perhaps, most importantly, could we have seen a day when the U.S. Department of Justice would begin to enforce the right to counsel through its Civil Rights Division?

And there’s more.  Since Gideon’s 40th anniversary the state of New Mexico Public Defender has gone through four leadership changes as undue political influence has led Governors of both political parties to appoint their own chief defenders.  On Friday March 15, 2013, the New Mexico Senate passed a statewide public defender commission bill that had already been voted successfully through the House.  This legislative victory came as a result of the New Mexico electorate passing a constitutional amendment requiring the creation of an independent public defender commission.  March 15, 2013, also saw the proposed initial reforms in Idaho favorably voted out of the Senate Judiciary Committee after already having been passed by wide margins in the House.  And, substantial reform in one of the most notorious indigent defense states – Michigan – is seriously in play this session.

Are any of the states mentioned above fully realizing Gideon’s promise? The answer is “of course not.” But at least in each state there is now a structure – a “system” – that can keep the fight for equal justice going at the local level. Our challenge now is to ensure that Gideon doesn’t take another 50 years to be fully realized.  The Sixth Amendment Center, therefore, chooses to celebrate today’s historic anniversary even as we pledge to work tirelessly on behalf of those less fortunate in the reform efforts to come. 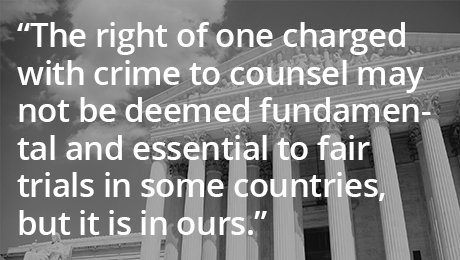 Gideon’s 50th in the news

Mesquite Local News, (Opinion) Justice for all includes the poor

NPR, After 50 Years, A State Of Crisis For The Right To Counsel
Anderson Independent-Mail, Celebrating 50 years of the right to counsel

USA Today, You have the right to counsel. Or do you?