In wake of 6AC report, legislative changes are already afoot in Utah

Posted on October 26, 2015 by David Carroll Posted in Pleading the Sixth

Pleading the Sixth: On the heels of the 6AC report, the Utah Judicial Council adopted a report on October 26, 2015, by an indigent defense study committee calling for significant state actions, including a statewide commission with authority to set standards (workload, performance, attorney qualifications, etc.) and monitor compliance, the first-ever statewide funding, and a ban on flat fee contracts, to name a few. The report has even suggested draft legislative language. (In Part I of the story, here, read about one defendant’s experience as symptomatic of the issues.) 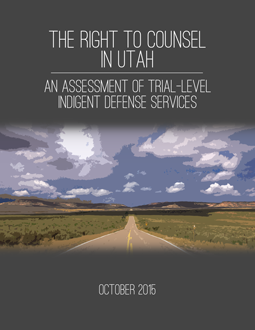 On October 26, 2015, the Utah Judicial Council (UJC) – the policy-arm of the judicial branch of government – received and adopted a report from the UJC’s Study Committee on the Representation of Indigent Criminal Defendants in Trial Courts, setting forth legislative and other recommendations to improve the right to counsel in that state. The adoption of the report makes the recommendations official policy of the UJC.

First, “there is lack of State oversight of the multitude of county and municipal indigent defense systems. This results in a dearth of information about how local systems function and whether they meet constitutional standards for providing indigent defense. It also means that local governments are left to their own sometimes-limited resources in seeking to discharge their indigent defense responsibilities.;”

Second, “some contracting conventions, such as the use of all-inclusive, flat-fee contracts, create systemic disincentives that may negatively affect the provision of defense services. The use of those contracts can create a structural tension by pitting an attorney’s financial interests against the best interest of a client;” and,

Third, “Utah’s justice courts face systemic pressures from a high volume caseload and a lack of uniformity in information and procedures to assure compliance with constitutional requirements.”

The 6AC will keep you posted on the progress!