2014 Caseload Assignments for All Attorneys in Marion County

The Marion County Public Defender Agency employs (or has openings for) at least 160 attorneys (including certified interns, but not including conflict attorneys) who represent indigent clients.  It reports the caseloads for these attorneys to the Commission broken down by divisions of the public defender office.  The office employs (or has openings for) at least 78 support staff, including: 3 court reporters; 2 interpreters; 2 investigators; 49 paralegals; 16 social workers; 2 receptionist/office managers; 3 non-attorney administration staff; 1 training director; and a varying number of interns each quarter. This is a ratio of .49 support staff for every 1 attorney, or just short of 2 support staff for every 4 attorneys. In its reports to the Commission, though, the county shows the attorneys in certain divisions as having adequate support staff and shows the attorneys in other divisions as having inadequate support staff. The divisions reported under “adequate support staff” are: major felony; appeals; and CHINS/TPR. The divisions reported under “inadequate support staff” are: misdemeanor & domestic violence (combined in 2014 reporting); D felony; major felony drug; juvenile; and problem solving.

The misdemeanor division of the Public Defender Agency includes licensed attorneys and certified interns. (See ** below.) A “certified intern” is a law student or graduate who has not yet taken or received the results of their first sitting for the bar examination. An intern may represent defendants in court “provided all activities undertaken are supervised and approved by” a licensed attorney who is personally present whenever the intern is representing a client “in any proceeding in open court.” The intern “shall inform each client of his or her intern status, and that the intern is not a licensed attorney.” Ind. R. Ct., Rules for Admission to the Bar and the Discipline of Attorneys, R 2.1 (as amended through Jan. 1, 2016).  The certified intern attorneys are paid hourly by the agency. In the table below, attorneys are shown as “FULL-TIME (hourly office)” for the quarter during which they were certified interns and as “FULL-TIME (salaried office)” for the quarters during which they were fully licensed attorneys.  It appears that during the second and third quarters of 2014, during which the agency employed nine certified interns handling misdemeanors, it averaged or estimated their caseloads rather than actually counting the number of cases assigned to each of these interns, as every intern shows 270 misdemeanor cases for those two quarters.  In the fourth quarter 2014, it appears the agency reported the actual number of cases handled by each of the attorneys who had been certified interns during the preceding quarters.

The CHINS/TPR division is made up of some full-time salaried agency employee attorneys and some part-time contract private attorneys. (See *** below.) It appears that the agency averaged or estimated the caseloads for all of these attorneys rather than actually counting the number of cases assigned to them, as nearly every full-time attorney shows 120 cases for the year and nearly every part-time attorney shows 50 cases for the year.

The rolling 12-month caseloads for the agency as a whole and for most of the individual attorneys are significantly underreported to the Commission each quarter. (See ****** below.)

First, the agency uses what it refers to as “calculation rule 6” in reporting its caseloads and calculating its non-reimbursable expenses.  This “rule” says, in relevant part: “Attorneys that transfer from one division to another will, only in the quarter of divisional change, have case assignments reported on both divisions’ spreadsheets.  For the relevant quarter, the old division’s spreadsheet will contain only cases assigned in that division. The new division’s spreadsheet will contain no other data whatsoever, except cases assigned in the new division for the relevant quarter.  In succeeding quarters, only the spreadsheet for the division of assignment will be required.  . . ..”  This accurately reports the caseloads of attorneys during a single quarter, but it significantly underreports the rolling 12-month caseload for every attorney who changes divisions during any 12-month period, because in quarters after the transfer, the cases that were assigned to the attorney during the quarters preceding the transfer disappear from that attorney’s caseloads as reported to the Commission.  Agency attorneys transfer relatively quickly from the misdemeanor division to the domestic violence division to the D felony division, so a very large number of misdemeanors disappear from the caseloads of individual attorneys as they make these transfers. Though transfers occur into the major felony division with less frequency, when they do occur they result in underreporting the attorneys’ felony caseloads.  Also, because the agency reports some divisions as “adequate support staff” and some as having “inadequate support staff,” the movement of attorneys between these divisions and the disappearing cases mean the Commission cannot accurately determine the caseload limits that should apply to these attorneys.  This is all difficult to detect because the caseloads are reported by division, rather than by individual attorney.  The disappearing cases only appear by back-tracking through the quarterly caseload worksheets for every division (1) to identify attorneys who appear in two worksheets because they transferred divisions, and then (2) to review the caseloads attributed to each of those individual attorneys for the preceding quarters in the division they transferred from and for the ensuing quarters in the division they transferred to.  All of the following attorney’s caseloads were underreported to the Commission on the caseload worksheets for the fourth quarter 2014, as a result of having transferred from one division to another during 2014: Courtney Benson-Kooey, Jim Comerford, Annie Alonso, Ian Fleming, Amanda Frantz, Kendal Gulbrandsen, Christopher Kunz, Yoni Moise, Josh Puryear, Jesse Sanchez, Ashley Schneider, David Staples, and Kathy Stinton-Glen. In the table below, 6AC shows the actual number of cases assigned to these attorneys during 2014.

Second, the agency does not appear to count the number of cases actually assigned to individual attorneys in the misdemeanor division.  Rather, it appears that the agency averages or estimates the number of misdemeanor cases assigned to these attorneys in a given quarter.  This is difficult to detect because the agency reports the caseloads of the misdemeanor division (including attorneys and certified interns) and the domestic violence division together in a single worksheet, and over time the caseloads of the individual attorneys begin to vary.  By focusing, though, on the first quarter of a year and looking only at the misdemeanor attorneys, it becomes apparent.  For example, the first quarter 2014 caseload worksheets for the misdemeanor division show that all of the following misdemeanor attorneys had exactly 217 cases in the fourth quarter of 2013 and 208 cases in the first quarter of 2014: Caitlin Brown, Stepheni Ennis, John Gallo, Shannon Garvey, Dan Hageman, Richard Mantel, Ryan O’Connell, Mason Riley, Katherine Robinson, Kelly Starling, Larry Stropes, Dan Thomas, and Joshua Vincent.  The same estimating or averaging, rather than counting, appears to be true for CHINS/TPR cases. 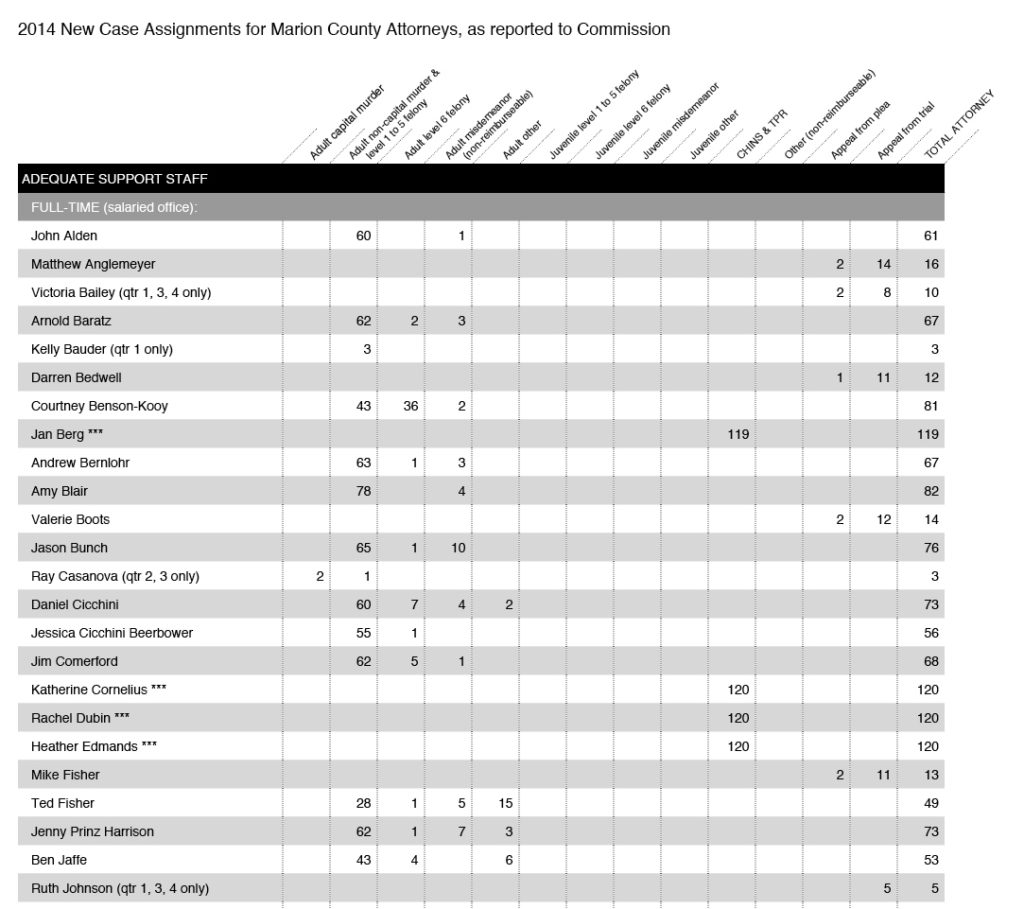