2014 Caseload Assignments for All Attorneys in Warrick County

Only two of the four Warrick County judges made their caseload assignments available, and one judge had just taken the bench so could not provide caseload assignments for 2014. To estimate the caseloads of the individual attorneys, 6AC relied on publicly available data from the Indiana Judicial Service Report for 2014 for the numbers of cases assigned to pauper counsel for each court and case type. SUPREME COURT OF INDIANA, 2014 INDIANA JUDICIAL SERVICE REPORT Vol. 2 at 722-23 (2014).

The judges provided a list of the contract attorneys. Interviews and observations revealed the distribution of cases. Sherry Smith is appointed to the first parent in all civil proceedings, and additional attorneys are appointed on an hourly basis to represent additional parties in the same case as needed. Criminal and juvenile cases are assigned in as equal a rotation as possible to the other seven attorneys, except Jon Young receives only half as many appointments because he also staffs the drug court.

Murder cases and appeals are excluded from the oral flat-fee contracts.

The magistrate presides over all adult misdemeanors in the county, regardless of the court to which it was originally allotted. Of the 192 total misdemeanors: 78 in Circuit; 63 in Superior 1; and 51 in Superior 2. 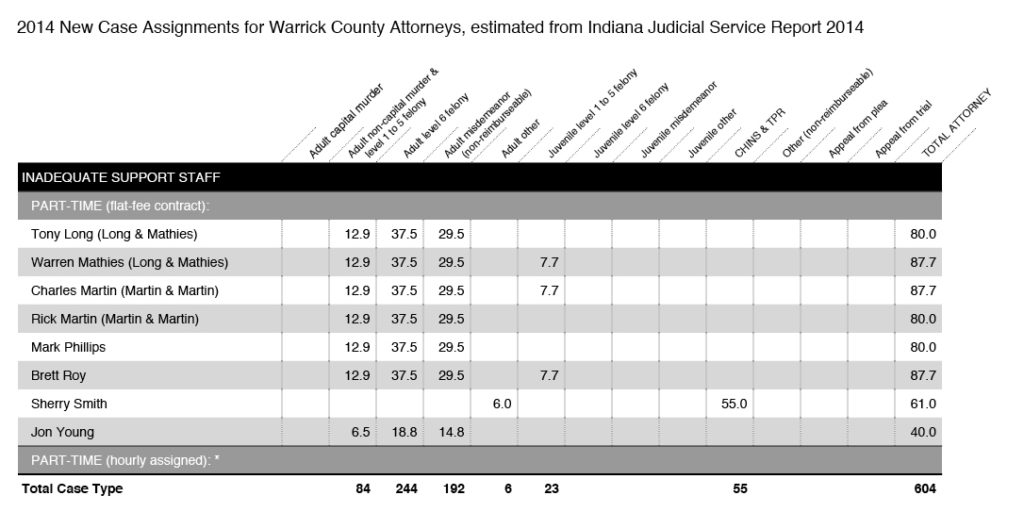