Since July 1, 1989, all of Indiana’s 92 counties have been eligible for reimbursement by the state for 50% of their defense costs in death penalty cases where the defendant is indigent and receives publicly provided counsel. The Indiana Public Defender Commission administers the reimbursement program and is responsible only for verifying that the expenses were in fact for the defense of such a case and, since January 1, 1992, that the attorneys were appointed in compliance with Rule 24.

Fifty counties have never received any state reimbursement under this program. Another five counties received reimbursement only during the two-and-one-half year period prior to Rule 24, when the sole requirement for reimbursement was that a defense expenses had been incurred and paid. The remaining 38 counties have received some benefit from the program at a time when they were required to comply with Rule 24 in order to receive that benefit.

The information provided in the table below was compiled by the Sixth Amendment Center from a review of the Minutes of all meetings of the Indiana Public Defender Commission from January 29, 1998 through September 17, 2014. The Commission operates on a fiscal year running from July 1 through June 30, while the counties operate on a calendar year. Until the 1st quarter of 2001, there was no deadline by which counties had to submit their claims for reimbursement, so a given quarter may include expenses incurred in more than one preceding quarter. Beginning with the 1st quarter of 2001, counties were required to submit their reimbursement claims within 120 days of when the county had paid an expense for which it was seeking reimbursement. But each county is likely to have its own procedures for when it pays expenses in capital cases; some may make intermittent payments on a monthly or quarterly basis; some may wait until the conclusion of the case and then make all payments. Thus when a county submitted its claim for reimbursement does not indicate when the county incurred those expenses. 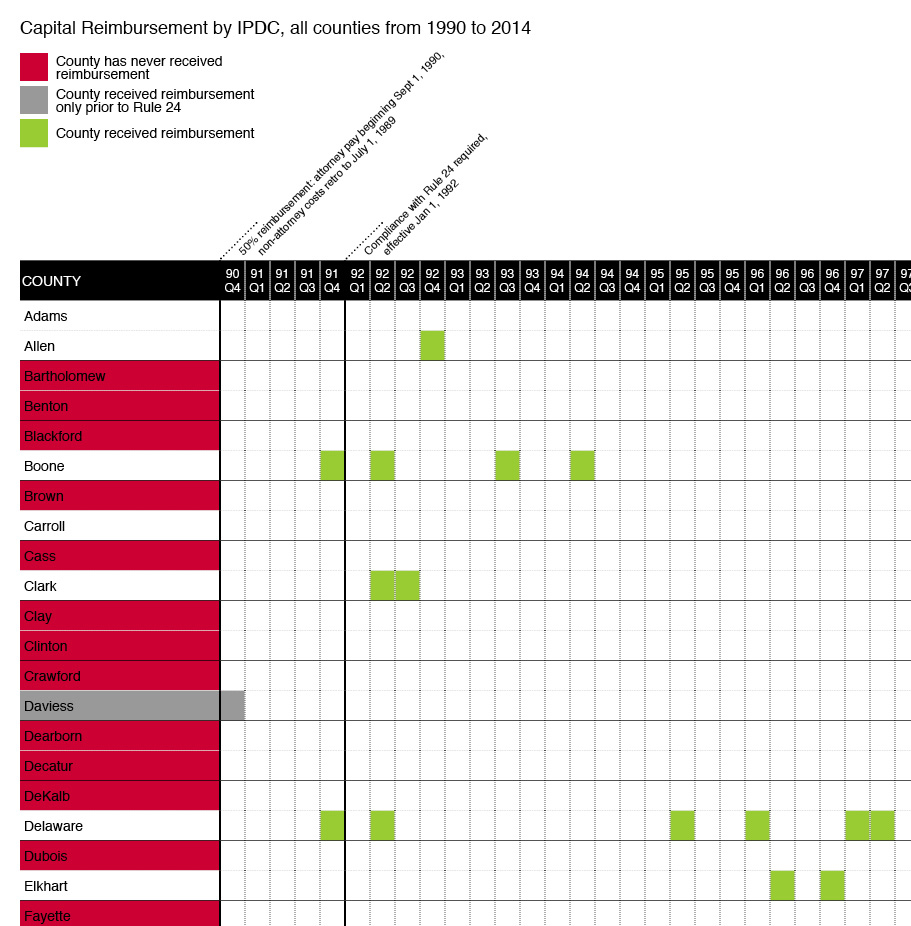