Staff to Do the Work of the Commission

The Commission has significant time-consuming statutory responsibilities. It has on-going responsibility to recommend standards for all indigent defense services. It is wholly responsible for establishing and overseeing the procedures that counties must follow to seek and receive both capital and non-capital reimbursement. And, it is responsible for carrying out on a continuing basis the state reimbursement program to counties. This means reviewing every page of every reimbursement request to ensure that the expenses for which counties are seeking reimbursement are proper ones, that the courts are complying with Rule 24 in capital cases, and that the counties, courts, and attorneys are complying with the non-capital case standards, all before certifying that a county’s reimbursement request should be paid.

The Commission itself is made up of appointed members, who typically fill their role on the Commission in their spare time because they hold other full-time jobs, and quarterly Commission meetings occur mostly in the late afternoons and evenings. As a result, the day-in day-out work of the Commission must be performed by staff, and the Division of State Court Administration of the Indiana Supreme Court is responsible for providing the necessary staff. The Commission has never been adequately staffed to fulfill all of its statutory roles.

From the Commission’s inaugural meeting in January 1990 until February 1998, it had only as-needed part-time access to a Division of State Court Administration employee for its staffing needs. As a practical matter, the Council carried out the staff duties of the Commission during this time; first under a contract from July 1990 through June 1991, and then as an uncompensated service from July 1991 through January 1998. 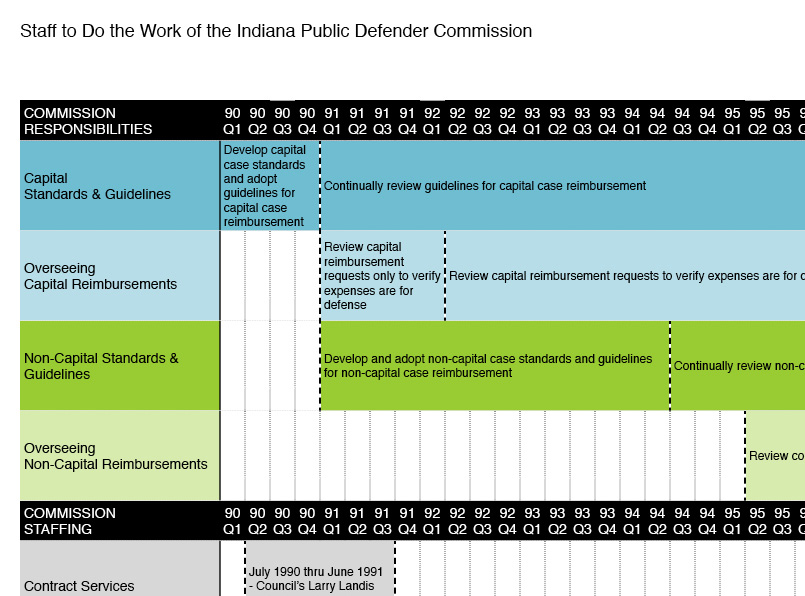