The Office of Indigent Defense Services (OIDS) is an executive branch agency housed in the Department of Finance, responsible for administering all indigent defense services, both primary and conflict. (OIDS does not, however, have oversight of municipal courts.)  The Finance Director appoints the OIDS Director to a three-year term (termination for just cause only) from three names nominated by the Alabama State Bar, Board of Commissioners.

OIDS is statutorily obligated to set standards related to, among others: fiscal responsibility and accountability; minimum attorney qualifications, training, and other standards by case type; caseload management; attorney performance standards; the independent, efficient, and competent representation of conflict defendants; indigency and partial-indigency determinations; and recoupment. 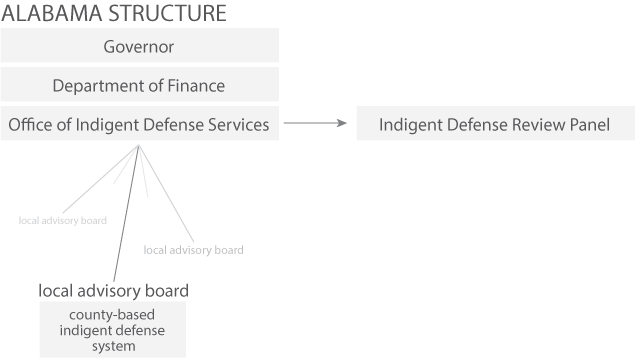 A state Indigent Defense Review Panel hears appeals of any disagreement between a local advisory board and the director of OIDS about local service delivery. The panel is a five-member body composed of appointments made by: the president of the Alabama State Bar (two appointees); the state’s Association of Circuit Court Judges (one appointee); the Association of District Court Judges (one); and the president of the Alabama Lawyers Association (the state’s African-American Bar). Appeals to the review board by OIDS may be either standards-based or based on fiscal concerns. The decision of the review board is final.

Counties do not contribute to the funding of indigent defense services. Instead, money from a filing fee in civil court matters is collected in a central fund dedicated to indigent defense services. If the Office of Indigent Defense Services (OIDS) funding needs exceed the amount of dollars available in that fund, the state is statutorily responsible for funding the difference out of the state general fund.

Local indigent advisory boards within each judicial circuit make decisions regarding the structure of local right to counsel services. 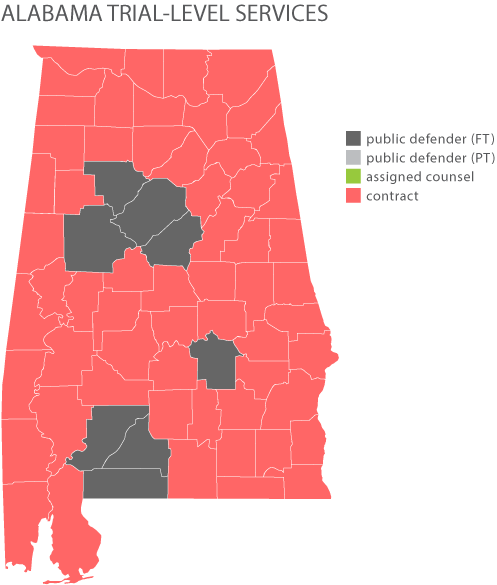 6AC Views on News from Alabama