Alaska has two parallel systems providing right to counsel services across the state. Both are executive branch agencies.

The primary statewide system is the Public Defender Agency (PDA). The PDA’s chief public defender is appointed to a four-year term by the governor from two nominations of the Judicial Counsel and subject to confirmation by a majority of members of the legislature, and can only be removed for good cause.

Primary services are provided by the Public Defender Agency (PDA), which has branch offices located in various locations throughout the state. PDA uses a mixture of full-time staff attorneys and contracts with private attorneys.

In cases of conflict, the Office of Public Advocacy (OPA) provides services through a structure similar to that of the primary system, but with a greater emphasis on contracting with private counsel for direct representation. The OPA also provides representation in abuse and neglect cases, public guardianship for incapacitated adults, and for parents in child in need of aid cases. 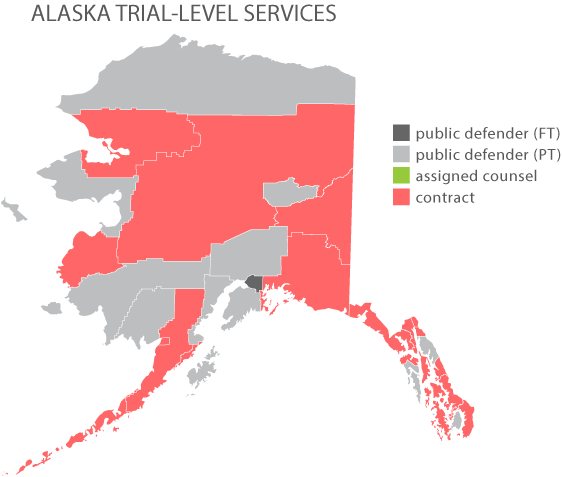