The Arkansas Public Defender Commission (APDC) is an executive branch agency. APDC is composed of seven members, all appointed by the Governor. Commissioners are appointed to five-year terms. Four commissioners must be attorneys, one must be a county judge, and one a district judge.

APDC has ultimate statutory authority to set standards and policies related to the delivery of indigent defense services, including standards for the qualifications, training, and performance of attorneys. 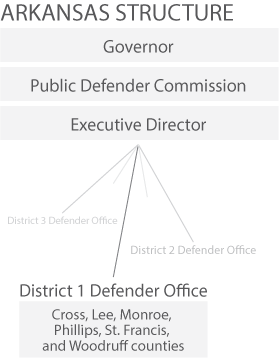 The Commission has a central office that houses a conflict capital office, appellate services, and a training unit.

In State v. Independence County, 312 Ark. 472, 850 S.W.2d 842 (Ark. 1993), the Arkansas Supreme Court decided that the state is responsible for the funding of indigent defense services.  However counties are responsible for some limited physical plant costs including utilities and telecommunications for public defender offices. Additionally, counties and municipalities can – if they so desire – contribute to an office to increase staff and augment state funding (though only the city of Little Rock has chosen to do so).

For the most part, APDC delivers indigent defense services through staffed public defender offices in each of the state’s 23 judicial circuits (covering 75 counties), although they have determined that certain circuits require two or more offices. For example, Arkansas’ second judicial circuit is composed of six counties. Rather than have a single office, the commission authorized one office to serve four counties (Clay, Craighead, Greene, and Poinsett), a second office to serve Crittenden County, and a third to serve Mississippi County. 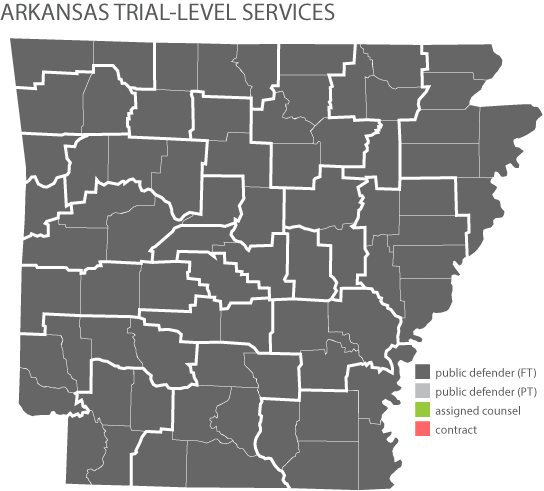 For conflicts, APDS primarily contracts with private attorneys. In certain urban areas of the state, however, the commission has determined that enough conflicts exist to support conflict public defender offices. For example, the Northwest Conflict Office serves as a regional conflict office for two counties (Madison and Washington counties), while another conflict office in Little Rock serves Pulaski County.

6AC Views on News from Arkansas