Trial level indigent defense services are the responsibility of county governments in California.

Representation of individuals in direct appeals and post-conviction proceedings, in both capital and non-capital cases, is a function of the California courts system. The state courts contract with a number of non-profit corporations to provide oversight and training on their behalf. 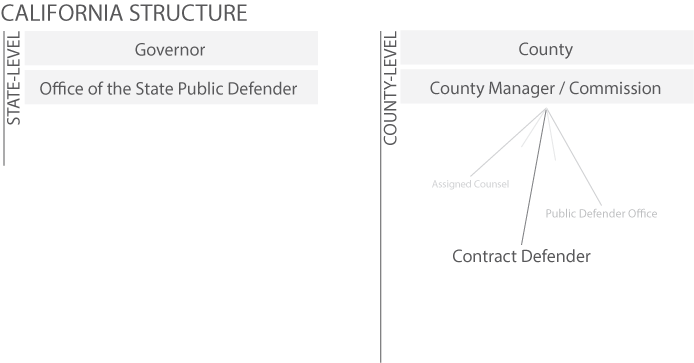 Local governments must shoulder the entire financial burden of providing trial-level public attorneys to the poor. For California’s more affluent counties, this has not proven to be a problem for the most part, and some of the most respected public defender offices and assigned counsel systems in the country are in California. For less affluent counties, however, substantial state restrictions placed on the counties over the past 35 years have limited their ability to raise revenues. This, combined with the long list of county government responsibilities, makes it difficult for indigent defense services to rise to the top of the triage list in most of the California counties.

Each county in California determines for itself the method(s) it uses to provide an attorney to indigent defendants at the trial court level. 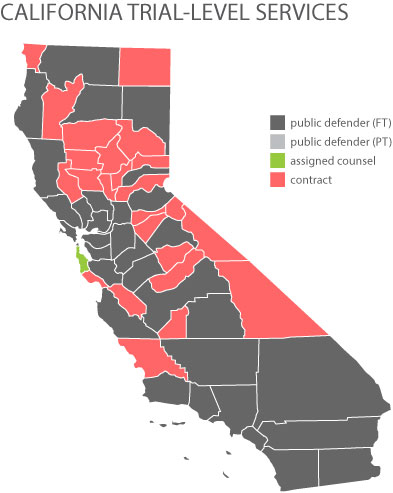 For direct appeals and post-conviction cases, the California courts system contracts with a number of non-profits and private attorneys.

In death penalty appeals and post-conviction proceedings, the non-profit California Appellate Project – San Francisco (CAP-SF) was established in San Francisco by the State Bar of California in 1983 as a resource center for private attorneys taking capital cases on direct appeal and onward through habeas corpus proceedings. CAP-SF operates under contract from the Judicial Council of California. The state of California supplemented CAP-SF in 1998 with the creation of the Habeas Corpus Resource Center, an arm of the state courts that provides direct representation to individuals in death penalty habeas proceedings before the Supreme Court of California and the federal courts. HCRC also provides training and accreditation assistance for private attorneys looking to become qualified to handle appointments in capital post-conviction proceedings. The Office of the State Public Defender, originally created in 1976 as a statewide appellate defender office under the judicial branch of government. Since 1990, OSPD has focused almost exclusively on death penalty cases, mostly on direct appeal in the California Supreme Court. In 2020, OSPD’s mission was statutorily amended to include improving indigent defense services provided by the counties.

Learn about systemic litigation in California

6AC Views on News from California