Florida’s 67 counties are divided into 20 judicial circuits, and in each of these judicial circuits, a chief public defender is popularly elected to ensure independence from the judiciary and other governmental agencies. Chief defenders are elected every four years.

The Florida Public Defender Association, Inc. (FPDA) is a private, non-profit entity created in the early 1970s to bring a more unified voice to the 20 independent elected circuit public defenders. Its executive director is selected by vote of the elected circuit defenders. FPDA provides training, lobbying, and other technical assistance services where cost efficiencies can be had through centralized services among the distinct offices. FPDA also disseminates state funding to each of the circuit defender offices.

It may be tempting to think of the FPDA executive director as analogous to a statewide chief public defender in another state, but that would be incorrect. The FPDA executive director carries out policies as determined by the elected circuit public defenders. And, because FPDA is a not statutorily required to exist, the elected circuit defenders are not required to participate in the Association. The 20 circuit defenders are ultimately solely responsible to the constituencies that elect them.

The right to counsel in Florida is considered state-funded, with some exceptions. Counties, for example, are required to provide office space and informational technology services for the 20 circuit public defenders. In addition, a few counties and municipalities pay the circuit public defender officess to provide representation in non-state misdemeanor cases. Counties are also not prohibited from contributing resources to circuits for special projects, for example, creating specialized units for early appointment of counsel or providing attorneys for county-based specialty courts such as a mental health court.

Public defender offices staffed with full-time employees provide primary representation to indigent defendants in each of the state’s 20 judicial circuits (covering 67 counties), with each office overseen by a popularly elected chief public defender. 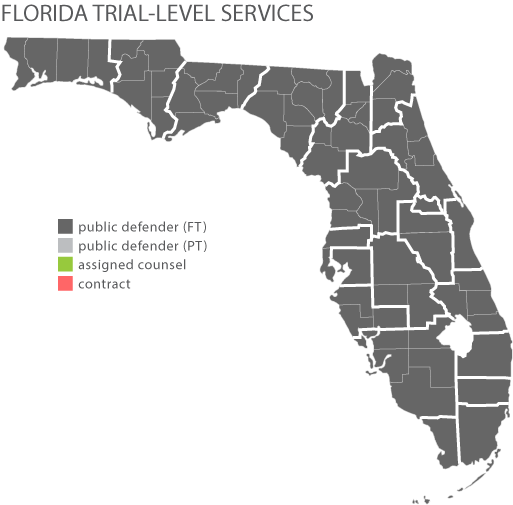 When a circuit public defender has a conflict – for example when there are multiple co-defendants or in instances of case overload – secondary representation is provided by five regional conflict defender offices covering each of the state’s five appellate jurisdictions, which are likewise staffed by full-time employees (although the chief conflict attorney is not popularly elected).

Tertiary representation is provided by private attorneys paid on an hourly basis or under contract to the judiciary.

6AC Views on News from Florida