All data is current as of 2017, unless otherwise noted.
Return to the list of all States & Territories. 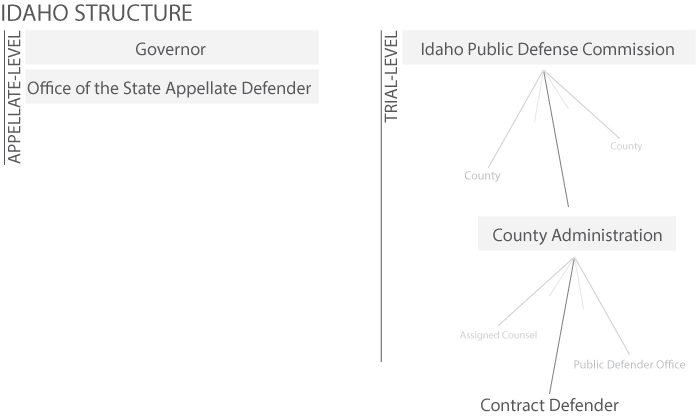 The provision of trial level indigent defense services is primarily a county obligation in Idaho. The board of county commissioners in each of Idaho’s 44 counties decides how its county will provide trial level right to counsel services to indigent people.

Idaho created its Public Defense Commission (PDC) in 2014 as a state-level agency within the Department of Self-Governing Agencies. Under Idaho’s constitution, this means that, although the commission is located in the executive branch, it does not have to answer directly to the Governor. The commission is considered to have limited authority, because it does not oversee appellate services.

1 member of the state senate, appointed by the president pro tempore of the senate;

1 appointee of the chief justice of the state supreme court;

4 members appointed by the governor and confirmed by the senate serving three-year terms:

1 representative of the Idaho Association of Counties;

1 representative of the Idaho Juvenile Justice Commission; and

None of the appointees may be a current prosecuting attorney or a current employee of a law enforcement agency.

Effective July 1, 2016, the PDC is responsible for promulgating statewide rules in seven primary areas: (1) standards for providing the effective right to counsel to indigent people; (2) implementing and enforcing standards in all indigent defense systems and evaluating compliance with standards; (3) training and education for public attorneys and systems to promote competency and consistency; (4) uniform data reporting requirements and model forms that counties can use to annually report at least caseloads, workloads, and expenditures; (5) model contracts that counties can use to contract for the provision of services and comply with standards; (6) procedures and forms for counties to apply for state grant funds, overseen and distributed by the commission; and (7) procedures for administrative review and fair hearings. The PDC is also required to make recommendations to the Idaho legislature each year for legislation needed on public defense system issues.

Effective September 1, 1998, Idaho created the State Appellate Public Defender’s Office (SAPD) in the executive branch of government within the Department of Self-Governing Agencies. The head of SAPD is appointed directly by the governor, with the advice and consent of the senate, to a four-year term and is removable only for good cause. The SAPD is responsible for directly representing, or contracting with a private attorney to represent, indigent people convicted of felonies in their appeals of trial level convictions, state post-conviction proceedings, and state habeas corpus cases, as well as in petitions for post-conviction relief in capital cases. However, the SAPD can only provide representation to indigent defendants who were convicted in counties that participate in the state’s capital crimes defense fund; as of 2017, this included all counties except Jefferson County.

Historically, the state did not bear any of the cost of trial level representation of indigent people. In 2016, the state legislature allocated approximately $5.4 million to the state’s Public Defense Commission (PDC), the majority of which was earmarked to assist counties to come into compliance with PDC standards. Counties are allowed, but not required, to apply annually to the PDC for state grant funding. Counties that want state funding must provide annual reports on the types and numbers of cases handled by attorneys in the county, the funds expended to provide indigent defense services, and how they comply with standards promulgated by the PDC.

The PDC is authorized to make grants to each county of up to $25,000 or 15% of the average the county spent on indigent defense services in the first three of the five years preceding a grant application – whichever is greater. That is, if a small rural county spent on average $50,000 annually on right to counsel services, that county could get a grant for $25,000 (or 50% of its spending). Meanwhile, a large county that spent $3 million annually on indigent defense can receive up to $450,000 from the state (15% of its three-year average spending). Importantly, state grants can only augment, and may not supplant, existing local funding. In 2016, the PDC made its first distribution of state funding grants to counties, and 43 of Idaho’s 44 counties received funding totaling over $3.9 million. Every county that applied received the maximum amount of grant funding for which it was eligible.

For trial level capital cases, Idaho has established what is basically an insurance fund for counties that choose to participate, known as the Capital Crimes Defense Fund. A seven-member board of directors elected by the participating counties administers the fund, and the participating counties pay on a per capita basis the costs of the fund. When a county has a case in which the death penalty is sought, the county pays the cost of one defense attorney plus a one-time $10,000 deductible, and the fund pays all other defense costs.

The state provides all funding for indigent felony appeals, state post-conviction, and state habeas corpus proceedings, in all counties except Jefferson County, through the annual budget of State Appellate Public Defender’s Office. Jefferson County could receive appellate services from the SAPD, but it would have to participate in the capital crimes defense fund in order to do so.

The board of county commissioners in each of Idaho’s 44 counties decides how its county will provide trial level right to counsel services to indigent people, choosing either to maintain a public defender office (individually, or jointly with one or more other counties) or to contract with a private attorney or law firm to provide representation. Historically, the majority of the counties used flat fee contracts, however, as of 2014, counties in Idaho are not permitted to enter into flat fee contracts for the provision of indigent defense services.

As of 2017, 12 of the state’s 44 counties have public defender offices: Ada, Bannock, Bonner, Bonneville, Canyon, Cassia & Minidoka, Gooding, Kootenai, Power & Oneida, and Twin Falls. The other 32 counties contract with private attorneys or private law firms to represent indigent people at the trial level.

The State Appellate Public Defender (SAPD) office represents indigent defendants who have been convicted of felonies, in all but Jefferson County, in their appeals of trial level convictions, state post-conviction proceedings, and state habeas corpus cases, as well as in petitions for post-conviction relief in capital cases. SAPD has some full time state employed attorneys, and it also contracts with private attorneys to provide representation as needed on a case-by-case basis.

6AC Views on News from Idaho