The right to counsel in Illinois

The Illinois Constitution guarantees that, “[i]n criminal prosecutions, the accused shall have the right to appear and defend in person and by counsel; . . ..” In criminal proceedings at the trial level, “[e]very person charged with an offense shall be allowed counsel before pleading to the charge.” Counsel “shall” be appointed “if the court determines that the defendant is indigent and desires counsel” in every case that carries a penalty other than “fine only.”

Children are provided appointed counsel in both delinquency offenses and proceedings for “minors requiring authoritative intervention” (what many states refer to as status offenses). Where a child under the age of 17 is an accused or defendant in a criminal proceeding (other than one where the penalty is a fine only and most Illinois Vehicle Code proceedings), the child cannot waive the right to counsel. Illinois law prohibits children from waiving their right to counsel in delinquency proceedings, and children under the age of 15 in most serious delinquency matters “must be represented by counsel throughout the entire custodial interrogation of the minor.”

On direct appeal from conviction of a felony, the court “shall” appoint counsel “if the court determines that the defendant desires counsel on appeal but is indigent.”

Though the federal Constitution does not require it, Illinois statutorily guarantees appointed counsel to defendants lacking the means to obtain an attorney in post-conviction proceedings of all death-sentenced defendants and in all post-conviction proceedings where the petition is not dismissed as frivolous or patently without merit. Illinois appoints counsel to represent children who are the “subject of” every abuse & neglect or dependency case. The state also provides public counsel to represent indigent parents, guardians, legal custodians, or responsible relatives who are “parties respondent” in any abuse & neglect, dependency, minor requiring authoritative intervention, or delinquency proceeding.

The Office of the State Appellate Defender is a state-funded, statewide agency in the judicial branch, representing indigent defendants on appeal in criminal and delinquent minor proceedings, when appointed by a court. The judges of the Illinois Supreme Court by majority vote appoint the State Appellate Defender to a four-year term, removable only for cause and after a hearing, but the commission may recommend removal if it has reasonable grounds for doing so. Additionally, the office conducts training for county public defenders.

All trial level right to counsel services are administered at the county level.

For indigent appeals, the state funds in full the Office of the State Appellate Defender, although in some counties the appeals may be handled by attorneys selected and paid at the county level.

At the trial level, the state covers 66.6% of the cost of the chief defender’s salary in each county with a standing public defender office. For everything else, the counties must determine for themselves how much to fund services, with no oversight by the state.

The Office of the State Appellate Defender represents indigent defendants on appeal in criminal and delinquent minor proceedings, when appointed by a court. The office may “maintain a panel of private attorneys available to serve as counsel on a case basis” and may “institute a competitive bidding program under which contracts for the services of attorneys in non-death penalty criminal appeals are awarded to the lowest responsible bidder” in which “gross compensation for completing of a case shall be $40 per hour but shall not exceed $2,000 per case.” The office is required to operate an “Expungement Program” that provides information to persons desiring expungement, but the office does not directly represent people in obtaining expungements. The office staff includes the State Appellate Defender, five deputy defenders (one for each judicial district), and assistant appellate defenders and administrative employees as necessary.

At the trial court level, all public defense representation in the circuit courts in criminal cases carrying possible loss of liberty is provided through either appointed private attorneys or through a public defender office.

Adjoining counties within the same circuit may create a shared public defender office if they wish.

In counties that have a public defender office (whether compelled or by choice), the chief public defender is selected either by the president of the county’s board of supervisors (in Cook County – Chicago) or by majority vote of the circuit court judges (everywhere else). 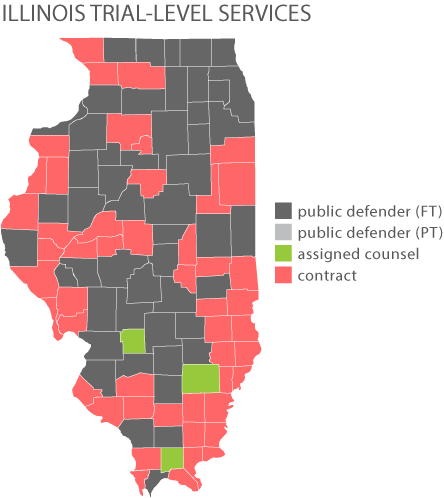 Learn about systemic litigation in the States & Territories

6AC Views on News from the States & Territories