The Indiana Public Defender Commission (IPDC) is an eleven-member commission appointed by a diversity of factions: Governor (3 appointments); Chief Justice (3); Speaker of the House (2); Senate President Pro Tempore (2); and the Indiana Criminal Justice Institute, which is the state’s criminal justice planning committee (1). The IPDC promulgates standards related to workload, attorney qualifications, and pay parity, among others, for both capital and non-capital representation, but the standards only apply to those counties that choose to participate in the commission’s system.

Limited state financial assistance is available to counties, through the Indiana Public Defender Commission (IPDC), to help defray costs of the right to counsel. Those counties that choose to participate by meeting the IPDC’s standards are eligible to be reimbursed up to 50% of their capital representation costs and up to 40% of their non-capital costs (excluding the cost of misdemeanors; counties and cities bear the full financial burden for providing defense of the indigent in misdemeanor cases). 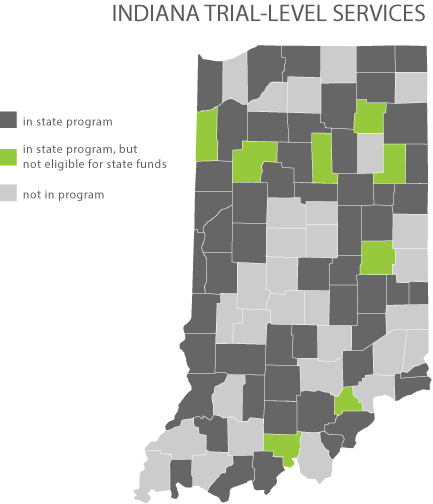 State funding for the reimbursement plan has not always kept pace with its intended effect. For example, reimbursements to counties for non-capital representation dropped to a low of 25.1% in 2003-2004. In the 2009-2010 fiscal year, however, the Commission was able to raise the reimbursement rate for participating counties back up to the state’s intended 40%. But part of the explanation for why the state was able to reimburse counties 40% of their non-capital representation costs is the fact that the number of counties choosing to participate decreased from 57 counties in 2006-2007 to 48 counties in 2008-2009. In short, many counties have chosen to forego state assistance, opting to cut costs without complying with standards through flat fee contracts. As of 2014, 54 counties of the state’s 92 (59%) receive reimbursements.

The Indiana State Public Defender provides representation in post-conviction proceedings (i.e., indigent adults and juveniles who are incarcerated and are challenging a sentence or a commitment).

All other direct representation services are county-based, provided through a mixture of traditional public defender offices, contracts with private attorneys, or attorneys appointed on a case-by-case basis.

6AC Views on News from Indiana