The Kentucky Department of Public Advocacy (DPA) is a statewide, state-funded agency in the executive branch. DPA is overseen by an independent 12-member Public Advocacy Commission appointed by diverse authorities: Governor (7 appointments: 3 lawyers recommended by Kentucky Bar Association; one child advocate; 1 recommended by DPA’s Protection & Advocacy Division; and 2 others); Kentucky Supreme Court (2 appointments); dean of each law school in Kentucky (3 appointments total). The Commission appoints the state public advocate who, in turn, is responsible for executing the Commission’s policy directives including the proper administration of right to counsel services across the state.

Jefferson County’s indigent defense system — the Louisville – Jefferson County Public Defender Corporation — operates outside of, but in cooperation with, the statewide system. Having been in existence long before the creation of the Department of Public Advocacy, Jefferson County opted to retain its existing system, rather than join the state system. Jefferson County must nonetheless comply with DPA standards in providing the right to counsel. 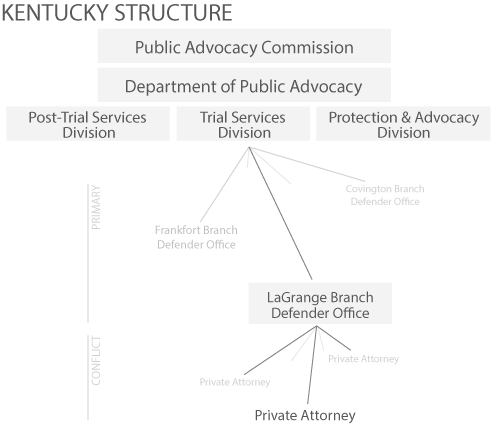 Funding for the Jefferson County system comes from a combination of county and state dollars. The state fully funds the right to counsel in all other counties. 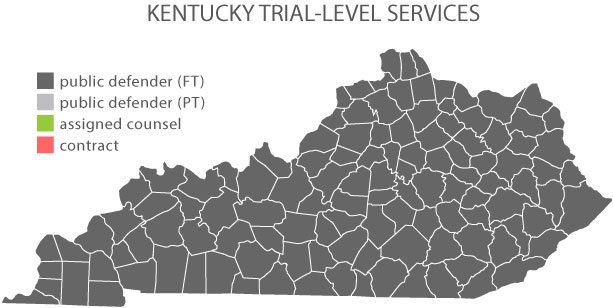