The Louisiana Public Defender Board (LPDB) is an eleven-member commission housed in the executive branch that is statutorily required to promulgate indigent defense standards. LPDB members are appointed by diverse authorities: Governor (5 – one representing each appellate court district); Chief Justice (4 – one juvenile justice expert; one retired judge; two members at large); Senate President (1); and Speaker of the House(1). 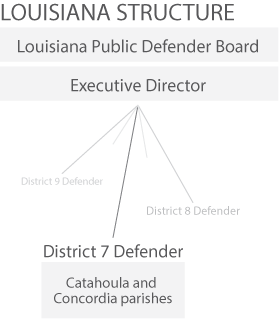 Louisiana stands alone in the nation as the only jurisdiction with a statewide indigent defense system that relies to a large extent on locally generated non-governmental funding for the right to counsel. The majority of funding for trial-level services comes from a combination of fines and fees (e.g., bail bond revenue, criminal bond fees, revenue from forfeitures, and indigency screening fees, among others). The single greatest of these revenue generators for indigent defense in Louisiana is a special court cost ($45) assessed against every criminal defendant who is convicted after trial, pleads guilty or no contest, or who forfeits his or her bond for violation of a state statute or a local ordinance other than a parking ticket. The result of this funding scheme is that a significant part of funding for trial-level representation in Louisiana comes from fees assessed on traffic tickets. The City of New Orleans augments state funding with limited local funding.

Louisiana’s trial-level right to counsel services are delivered with some local autonomy. Louisiana has 42 judicial districts covering its 64 parishes (the equivalent of counties in other states). Prior to the creation of the Louisiana Public Defender Board (LPDB) in 2007, each district had a “chief defender” of the district, and those existing chiefs were grandfathered in under the 2007 statute, allowing them to continue to determine how best to deliver services in their district (assigned counsel, contract defender, staffed public defender offices, or a combination). The legislative reform of 2007 created LPDB ombudsmen who are required to evaluate services in each district on a regular basis. If services are found to be deficient, LPDB is authorized to provide services under any model the Board sees fit, including regionalizing the provision of services.

Learn about systemic litigation in Louisiana

6AC Views on News from Louisiana