The right to counsel in Maine

With statehood in 1820, Maine adopted its constitution, stating that “[i]n all criminal prosecutions, the accused shall have a right to be heard by the accused and counsel to the accused.” The Maine legislature codified the right to appointed counsel in capital cases in 1870. In the 20th century, “in spite of the absence of statutory or decisional fiat, individual Justices . . . almost uniformly felt a moral and social obligation to furnish counsel to indigent persons charged with felonies in the Superior Courts.”

The Maine legislature responded to the Gideon v. Wainright decision promptly by enacting P.L.1963, Chap. 273, “which required both the Justices of the Superior Court and Judges of the new District Court system to assign counsel for indigents charged with felonies and permitted it (without compensation) in cases of misdemeanors.” In 1971, the Maine Supreme Judicial Court in Newell v. State ended the practice of distinguishing between felony and misdemeanors cases, declaring: “We are convinced that the time has come when due process demands that we abandon the felony-misdemeanor distinction as a basis for appointment of counsel and construe our own constitution to require appointment of counsel for needy persons charged with serious misdemeanors, unless waived. . . . Therefore, we hold that all indigent persons who are without attorneys and who are facing criminal charges which might result in the imposition of a penalty of imprisonment for a period of more than six months or a fine of more than $500 or both . . . must be informed by the Court of their right to appointed counsel and must have such counsel appointed unless they waive this right.” The next year, the U.S. Supreme Court extended the right to counsel to all misdemeanors with a potential jail sentence regardless of duration.

Conduct in Maine that is punishable by a fine only, without the possibility of incarceration, is a civil violation and “expressly declared not to be [a] criminal offense.” All crimes in Maine carry the possible loss of liberty, so every adult and juvenile charged with any crime, and who cannot afford to hire their own attorney, is entitled under the Sixth and Fourteenth Amendments to have counsel provided at public expense at trial and on direct appeal. A juvenile crime is committed by a person less than 18 years of age, including: conduct that would be a crime if committed by an adult – what other states often call juvenile delinquency; and certain conduct that is generally legal but illegal for persons under a certain age – what other states often call juvenile status offenses.

Though the federal Constitution does not require it, Maine statutorily guarantees appointed counsel to indigent defendants in post-conviction review proceedings from a criminal conviction, a judgment of not criminally responsible by reason of insanity, or a delinquency adjudication.  Maine also provides a right to counsel to indigent parents/custodians in child protection proceedings and to individuals in hearings for their involuntary commitment to a psychiatric hospital or involuntary treatment therein.

All indigent legal services in every type of case are provided under the auspices of the Maine Commission on Indigent Legal Services (MCILS), created in 2009. MCILS is an independent five-member commission in the judicial branch that is statutorily charged to: “provide efficient, high-quality representation to indigent criminal defendants, juvenile defendants and children and parents in child protective cases, consistent with federal and state constitutional and statutory obligations”; “ensure the delivery of indigent legal services by qualified and competent counsel in a manner that is fair and consistent throughout the State”; and “ensure adequate funding of a statewide system of indigent legal services, which must be provided and managed in a fiscally responsible manner, free from undue political interference and conflicts of interest.”

The Governor appoints all five members of the commission, though the appointments are subject to review by a joint legislative committee on judicial matters. One of the members must be appointed from a list of qualified nominees submitted by the President of the Senate, one from a list submitted by the Speaker of the House, and one from the Chief Justice. As of 2019, MCILS has a staff of only three people. 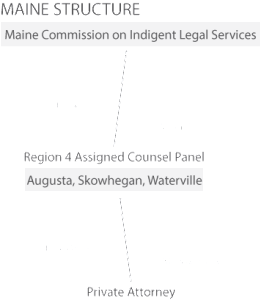 The State of Maine has paid 100% of the cost of indigent legal services since 1976. Nonetheless, the Maine Commission on Indigent Legal Services (MCILS) has consistently been underfunded since its inception. The annual legislative appropriation to MCILS has not kept pace with actual costs. In the eight years since its inception, the MCILS total annual funding has slightly more than doubled (from $11,085,696 in 2011 to $22,695,219 in 2019). The greatest portion of the MCILS budget is dedicated to attorney fees. For example, in FY 2018, 83.62% of the MCILS budget went to attorney fees ($18,978,078). But in each year, MCILS runs out of funding at some point during the budget cycle and requires supplemental funding to meet that year’s caseload requirements. During such times, attorneys may go without pay while MCILS secures supplemental appropriations.

The state-level Maine Commission on Indigent Legal Services (MCILS) oversees a statewide system that provides private attorneys to represent indigent defendants. Since its inception, MCILS has never used governmentally employed attorneys to provide representation to the indigent accused, leaving Maine as the only state in the country that provides all indigent defense services through private attorneys. Indigent legal services are provided at trial and appeal by nearly 600 private attorneys, handling cases in 47 courthouses presided over by approximately 90 justices, judges, and magistrates.

In all counties other than Somerset County, those private attorneys are paid $60 per hour (an increase from $50 per hour that took effect July 1, 2015). The maximum compensation an attorney can be paid for each case is capped, based on the type of case, and the maximum can be waived by the MCILS executive director.

In only Somerset County, MCILS has a single contract with three private attorneys to collectively provide all trial level indigent defense services absent a conflict of interest, to carry out any appeals from those cases, and to handle post-conviction review proceedings where they did not represent the petitioner at trial, in exchange for a fixed monthly payment. 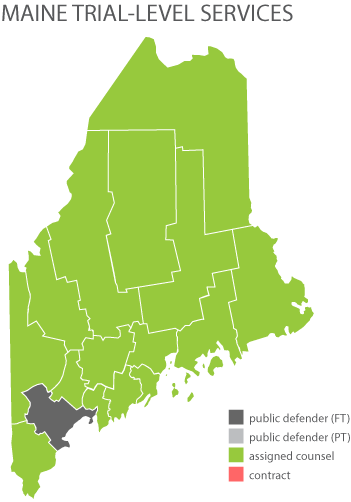 6AC Views on News from Maine