The Michigan Indigent Defense Commission (MIDC) is a 15-member commission in the executive branch. The governor appoints the members of MIDC based on recommendations submitted by: the Senate Majority leader (2 appointees); Speaker of the House of Representatives (2); Chief Justice (1); Criminal Defense Attorney Association of Michigan (3); Michigan Judges Association (1); Michigan District Judges Association (1); State Bar of Michigan (1); bar association advocating for minority interests (1); and the Prosecuting Attorney’s Association of Michigan (1). Additionally, the governor appoints a member to represent local units of government (1); and another member to represent the general public (1). The supreme court chief justice serves as an ex officio member of the MIDC without vote. MIDC has the power to develop and oversee the implementation of binding performance standards for trial-level right to counsel services in each of the state’s 83 counties. 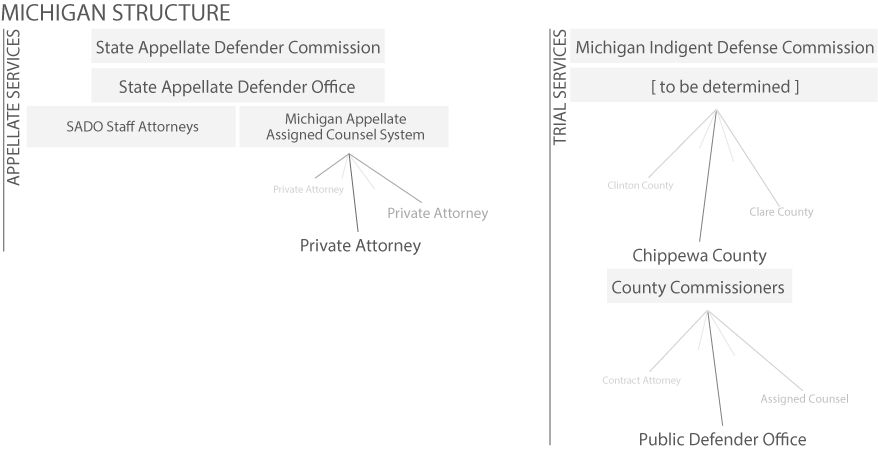 Counties must contribute a set amount of money each year that is based on the amount they spent prior to the creation of the Michigan Indigent Defense Commission. All additional funding necessary to meet standards comes from the state.

For appeals, both the State Appellate Defender Office (SADO) and the Michigan Appellate Assigned Counsel System (MAACS) are entirely state-funded.

While each county determines the delivery methods it will use to provide trial-level services (public defender office, contracts, or assigned counsel panel), the county must submit a plan for compliance with the Michigan Indigent Defense Commission’s (MIDC) standards, and MIDC has authority to investigate, audit, and review the operation of local county right to counsel services to assure compliance. 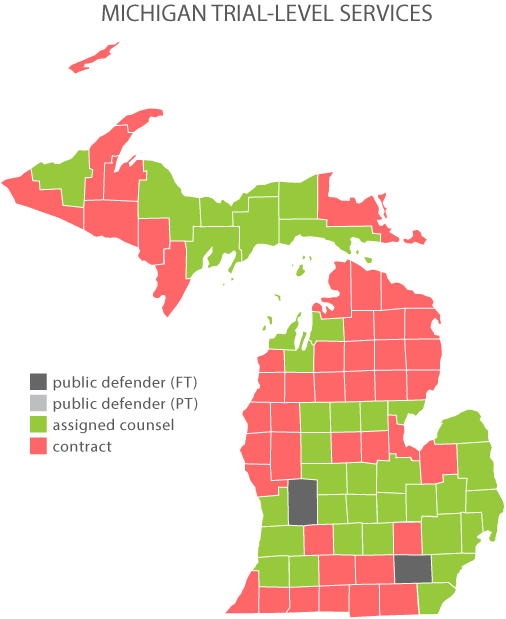 The State Appellate Defender Office (SADO) is a traditional public defender office with full-time attorneys and support staff. By statute, SADO only handles one of every four appellate cases. The Michigan Appellate Assigned Counsel System (MAACS) is a coordinated roster of private attorneys appointed to individual cases who are paid an hourly fee for their services. MAACS handles the remaining 75% of appeals cases.

Learn about the Sixth Amendment Center's work in Michigan

Learn about systemic litigation in Michigan

6AC Views on News from Michigan