The Montana Public Defender Commission (MPDC) is an 11-member commission appointed by diverse authorities: the Supreme Court (2 appointees); the President of the State Bar (3); the President of the Senate (1); the Speaker of the House (1); and the Governor (4 appointments, but they must be from organizations representing: (a) indigent persons, (b) Native American interests, (c) people with mental illness, and (d) people with addictions). No commission member may be a sitting judge, public defense provider, prosecutor, or law enforcement official.

MPDC is statutorily required to set standards related to manageable caseloads and workloads, to establish protocols for dealing with excessive caseloads, and to collect, record, and report caseload data to support strategic planning, including for proper staffing levels. MPDC is also authorized by statute to promulgate standards related to the qualification and training of attorneys, performance guidelines, and supervision.

The MPDC oversees the Office of the State Public Defender (OSPD). In addition to housing the Office of the Chief Public Defender, OSPD also houses the appellate division, a contracts division, and a training unit. OSPD employs 11 regional directors to oversee trial-level services. (Montana has 56 counties and 22 judicial districts; with no intermediate appellate court or regions, 11 regions were created based on a number of criteria related to the districts.) 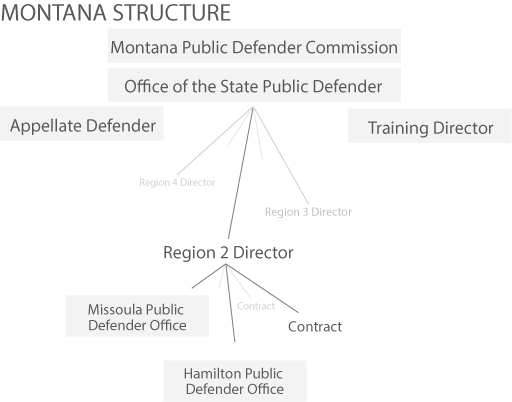 The 11 regional directors employed by the Office of the State Public Defender (OSPD) each determine the indigent defense delivery model used in their respective regions in consultation with OSPD. Montana is the fourth largest state geographically but with one of the smallest state populations (it ranks 48th of the 50 states in state population density), so it adopted a flexible indigent defense delivery system in which a region can make efficient use of both public and private attorneys. Each region now has staff attorneys and qualified private attorneys who enter into memoranda of understanding with OSPD to handle conflict and overload cases from the primary system. 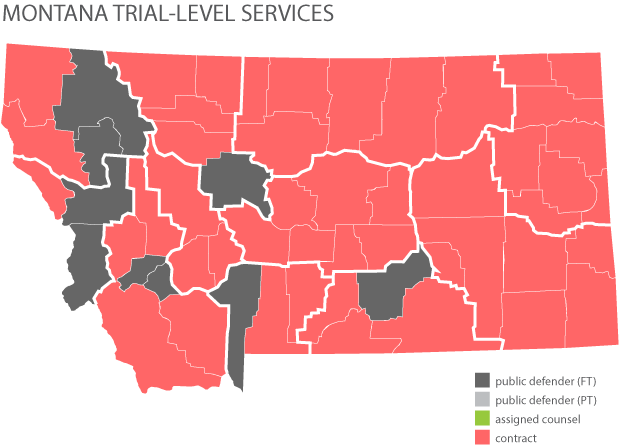 Learn about systemic litigation in Montana

6AC Views on News from Montana