The Nevada Board of Indigent Defense Services (BIDS), which oversees the Department of Indigent Defense Services, has 13 voting members and up to three non-voting members, each appointed to three-year terms and eligible for re-appointment. The individual members are selected based on backgrounds calculated to ensure consideration of a variety of viewpoints, and they are appointed by diverse authorities:

For the non-voting members: the Nevada Supreme Court Chief Justice may designate one person to represent the interests of the court; and the Governor may appoint up to two members, one of whom must be recommended by the State Bar of Nevada board of governors.

Each person appointed to BIDS must have either:

Board members cannot be currently serving or currently employed as: a judge, justice, or judicial officer; a legislator, state officer, or state employee; a prosecuting attorney or their employee; a law enforcement officer or employee of a law enforcement agency; nor an attorney who may obtain any financial benefit from the board’s policies. Also prohibited from serving on the board is anyone who is currently employed by: the Department of Indigent Defense Services; a public defender; or any attorney providing indigent defense services pursuant to a contract with a county.

BIDS is required to “[e]stablish minimum standards for the delivery of indigent defense services to ensure that such services meet the constitutional requirements and do not create any type of economic disincentive or impair the ability of the defense attorney to provide effective representation.” BIDS oversees the Department of Indigent Defense Services to monitor and enforce BIDS standards, and the State Public Defender to provide direct representation in those jurisdictions that opt to contract with BIDS (currently Carson City and Storey County).The rural counties that choose to not participate decide how much they will spend on providing right to counsel services and bear that cost.

However, BIDS must adopt regulations that:

Together, the board and the department are required to “develop procedures for the mandatory collection of data concerning the provision of indigent defense services, including the manner in which such services are provided.” As BIDS deems necessary, the newly created Department of Indigent Defense Services will conduct audits and investigations “to determine whether minimum standards in the provision of indigent defense services are being followed and provided in compliance with constitutional requirements.”

In short, all attorneys who are employed, contracted, or paid to represent indigent defendants must comply with the standards, adopted through regulation, that are promulgated by BIDS. The attorneys must also report to BIDS all information required, once the procedures are in place. If a county “is not meeting the minimum standards for the provision of indigent defense services or is in any other manner deficient in the provision of such services,” the new legislation gives BIDS and the department the authority to implement and enforce a “corrective action plan” to bring the county into compliance. Counties other than Clark and Washoe can be required to transfer responsibility for the provision of all indigent defense services to the State Public Defender (which is now under the authority of the department and BIDS). This legislation, for the first time, gives the State of Nevada the ability to provide effective oversight of right to counsel services throughout the state.

Pursuant to the Nevada Supreme Court’s inherent authority to regulate legal practice in the state, the Court issued Administrative Order ADKT-411 on January 4, 2008 that, among other things: a) instituted performance standards for attorneys in trial-level adult criminal, juvenile delinquency, and appellate representation; b) removed the judiciary from the oversight and administration of indigent defense; and c) required each county to submit to the Supreme Court for approval local plans for delivering indigent defense services.

As originally conceived in 1971, the State Public Defender was funded through a combination of state and county funding, with the state paying for 80% of all public defender costs in the rural counties and the counties paying the remaining 20%. Over time, the state reduced its financial commitment to the point where today participating counties pay 80% of the entire cost of the system. As only one of a number of agencies within the Department of Human Services, the State Public Defender must now justify its office budget among all human services divisions and then have the Director of Human Services argue that budget amongst all other cabinet departments.

The fourteen rural counties and one independent city (Carson City) may contract with the State Public Defender or may, if they so desire, establish a county public defender office. Today, the State Public Defender serves only Carson City and Storey County. Of the remaining counties, only Elko County has established its own county public defender office. In all other counties, the county governments have established systems in which the lowest bidder is contracted to provide representation in an unlimited number of cases for a single flat fee. The attorneys are not reimbursed for overhead or for out-of-pocket case expenses such as mileage, experts, investigators, etc. 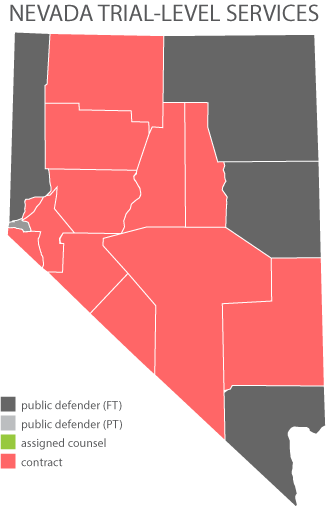 6AC Views on News from Nevada