The state of Ohio, for the most part, passes onto its county governments the responsibility for Sixth Amendment right to counsel services.

The commission oversees the Office of the Ohio Public Defender (OPD), but unlike state-level defender agencies in other jurisdictions, OPD only provides direct representation in certain types of cases. The commission is also responsible for promulgating statewide standards, but for decades it failed to do so.

Through the Office of the Ohio Public Defender (OPD), the state reimburses counties for a portion of the cost of trial-level representation. As originally conceived, the state would reimburse up to 50% of the counties’ costs, with the funds made available in the next fiscal year. But state funding never reached the promised 50% level, dropping in some years to as low as 25%.

In exchange for state reimbursement, counties were intended to comply with commission standards of quality, but the commission failed for decades to promulgate any standards, meaning there was no minimum threshold of quality against which to attach the state dollars. As a result, counties have little incentive to provide constitutionally adequate services.

Trial-level services are the responsibility of the state’s 88 counties, though a county may opt to contract with the OPD to provide these services. Only 11 counties have done so. OPD serves 10 counties in the southern part of the state through its Multi-County Branch Office Program, which contracts with private attorneys to provide representation, and operates a Trumbull County branch office to provide trial representation in that county through a combination of staff and contract attorneys. 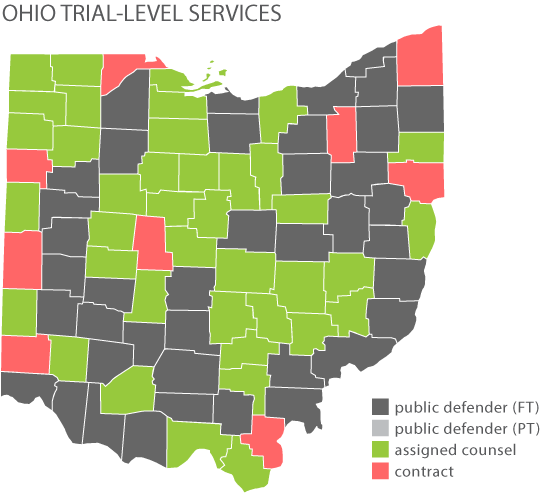 Learn about systemic litigation in the States & Territories

6AC Views on News from Ohio