The South Carolina Commission on Indigent Defense is a statewide body of the executive branch charged with overseeing the state’s delivery of indigent defense services. The commission has thirteen members. The governor appoints nine members: five appointments are based on the recommendations of the South Carolina Bar Association; and four are based on recommendations of the South Carolina Public Defender Association that must reflect geographic diversity from the state’s four judicial regions. The chief justice of the South Carolina Supreme Court makes two appointments: one must be a retired circuit court judge, and one must be a retired judge with either family court or appellate experience. The Senate and House Judiciary chairs each appoint one person from their respective committees.

The commission has the authority to promulgate standards regarding the provision of indigent defense services, including among others, attorney qualifications, performance, workload, training, data collection, attorney compensation, and indigency determinations.

Approximately 212 of South Carolina’s incorporated municipalities operate their own municipal courts, which have jurisdiction over misdemeanor, traffic, and ordinance violations that occur within the geographical boundaries of the municipality, many of which carry jail sentences as a possible punishment. Where these municipal courts exist, the municipality is responsible for providing counsel to indigent people. To the extent that these municipal courts provide a public defense attorney at all, they do so either by contracting with the circuit public defender office, contracting with one or more private attorneys, or by appointing a private attorney on a case-by-case basis.

For primary representation at the trial level in criminal and juvenile delinquency cases (other than in municipal courts), the South Carolina Commission on Indigent Defense employs 16 circuit public defenders. Each circuit public defender is selected through a complex process that begins at the county bar level and is hired for a four-year term. The circuit defenders receive salary and benefits on parity with both the state’s circuit judges and the state’s 16 elected circuit prosecutors (called Solicitors in South Carolina). The circuit defenders have broad flexibility as to how they run their day-to-day operations within the parameters of commission policy and standards. Though the circuit defenders are state employees, the assistant public defenders are employees of one of the counties within their circuit.

In capital cases, the Office of Indigent Defense has a Capital Trial Division that typically provides one attorney to work with a local public defender in any death penalty case of an indigent defendant.

For conflict cases and for primary representation in other types of cases (family court abuse and neglect cases, termination of parental rights cases, other family court matters, and post conviction relief cases), private attorneys are appointed. The Office of Indigent Defense processes and pays their vouchers.

All appeals on behalf of the indigent are handled by the Appellate Division of the Office of Indigent Defense. 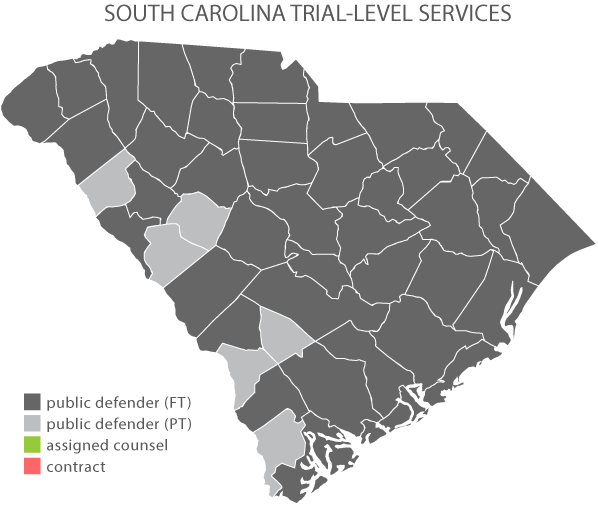