State commission: none
Branch of government: no statewide component 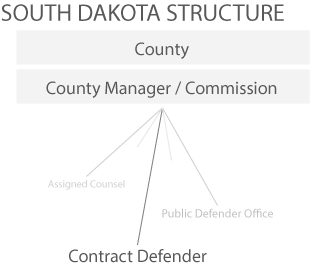 In 1982, the legislature established a court appointed attorney and public defender fund in the Office of the State Treasurer. Historically, no state general fund appropriation goes to this public defense fund.

Rather, every conviction of an indigent defendant in South Dakota results in the uniform assessment of court-appointed attorney fees at a set rate of $84.00 per hour. The recoupment fee is made a condition of the sentence, meaning that if a defendant is unable to pay, a warrant is issued for his arrest. The counties collect this money and remit it to the State Treasurer.

All money in the fund is then distributed back to the counties annually on a pro rata basis to offset the counties’ indigent defense costs. This is basically a math problem, whereby the Office of the State Treasurer determines the ratio of the amount spent by each county on indigent defense to the amount spent by all 66 South Dakota counties, and then divvies up whatever little money is in the fund by sending that same ratio back to each individual county.

State statutes require government to pay a public lawyer “reasonable and just compensation for his services.” The South Dakota Supreme Court interprets this statute to ban all flat fees. In 2000, the Court set public counsel compensation hourly rates at $67 per hour and mandated that “court-appointed attorney fees will increase annually in an amount equal to the cost of living increase that state employees receive each year from the legislature.” As of 2015, assigned counsel compensation in South Dakota stands at $90 per hour.