The right to counsel in Texas

The Texas Constitution guarantees that, “[i]n all criminal prosecutions the accused . . . shall have the right of being heard by himself or counsel, or both . . .,” and this same promise appears word for word in Texas’ statutes. Under Texas law, an indigent defendant is entitled to appointment of counsel “in any adversary judicial proceeding that may result in punishment by confinement,” including on direct appeal. All criminal offenses in Texas, whether enacted by state statute or county/municipal ordinance, are either a felony or a misdemeanor. All felonies are punishable by incarceration. Misdemeanors can be punished by jail or by fine or by both. Class C misdemeanors are the only criminal offenses in Texas that do not carry the possibility of incarceration, and Texas law expressly provides that “[c]onviction of a Class C misdemeanor does not impose any legal disability or disadvantage.”

Children in delinquency proceedings, whose parents are indigent, are guaranteed the right to counsel at certain stages of the proceedings.

Though the federal Constitution does not require it, Texas statutorily guarantees appointed counsel to indigent defendants in some later stages of a criminal case: in any criminal case where the Court of Criminal Appeals grants discretionary review; in habeas corpus proceedings where the state alleges wrongful conviction; and in habeas corpus proceedings in death penalty cases.

The state’s limited involvement in the right to counsel is through the Texas Indigent Defense Commission (TIDC). TIDC is a permanent standing committee of the Texas Judicial Council – a statewide judicial coordinating body, within the judicial branch of Texas government.

TIDC operates under a 13-member governing board, six members of which are also members of the Texas Judicial Council. The members are:

The board appoints the executive director of the TIDC, who must be an attorney and cannot have a private law practice. As of FY2019 (October 2018 through September 2019), TIDC is authorized 11 full-time positions to carry out all of its functions across 254 Texas counties.

The only other state-level agencies with responsibilities for representation provided to indigent people are:

Texas’ 254 counties are responsible for providing the right to counsel, with limited support from the state. In short, the trial level judges in each county who preside over criminal cases have almost complete authority over the systems of providing the right to counsel to indigent adult defendants. That authority is constrained, for the most part, only by the willingness of the county’s commissioners court to allocate funding. State law places responsibility for the provision of counsel to children on a juvenile board established in each county. 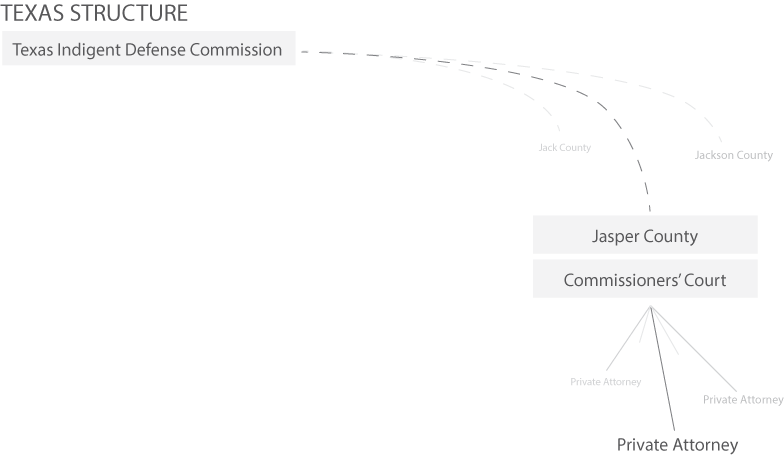 State law requires the county in which a criminal prosecution is instituted to pay the cost of appointed counsel and all reasonable and necessary expenses of the defense at both trial and appeal. Each Texas county is governed by a commissioners court made up of four county commissioners, each elected from a precinct of the county to a four-year term, and the constitutional county judge as the presiding officer. A county’s commissioners court is both the executive and the legislative authority in the county, and so it is the county governmental body that is responsible for setting the county’s budget including funding for the provision of the right to counsel.

The Texas legislature requires TIDC to make grants of state-appropriated funds to assist counties in providing indigent defense services and to monitor the counties that receive those grants to ensure that they comply with the grant conditions. TIDC makes two kinds of grants: formula grants, and discretionary grants; and it has adopted rules about how it makes those grants. Formula grants are “funding awarded to counties through a formula approved by the Commission.” All 254 Texas counties are eligible to receive a formula grant of a base amount each year ($5,000 for FY2019), though they must apply for the grant in order to receive it. Beyond the base amount, each county is eligible to receive an additional portion of the remaining TIDC formula grant funds, calculated according to TIDC specifications. Discretionary grants are “discretionary funding awarded on a competitive basis to implement new programs or processes in Texas counties designed to improve the quality of indigent defense services.”

The vast majority of the 254 counties in Texas rely on assigned counsel systems administered by the judiciary, in which private attorneys are paid either on an hourly rate or at a set rate per case.

Even in those counties with some form of public defender office, the choice remains with each trial judge as to whether to assign cases to the local office or appoint a private attorney. It is therefore quite possible for several or even all judges in a county to ignore the existence of a public defender office and to assign cases instead to private counsel under contract directly with the court.

The state Office of Capital and Forensic Writs represents people who have been sentenced to death in their state post-conviction habeas corpus and related proceedings.

For those incarcerated in the Texas Department of Criminal Justice (TDCJ), the TDCJ’s own state office of State Counsel for Offenders represents them at the trial level of any offense allegedly committed while incarcerated in the TDCJ and also provides legal assistance in appeals, discretionary writs, civil commitment proceedings, and immigration status.

Learn about the Sixth Amendment Center's work in Texas

Learn about systemic litigation in Texas

6AC Views on News from Texas