All data is current as of 2017, unless otherwise noted.
Return to the list of all States & Territories.

Historically, Utah’s counties and cities were wholly responsible for providing right to counsel services, with no oversight by or assistance from state government. Today, counties and cities still have the primary responsibility for providing, overseeing, and funding right to counsel services, but Utah has taken a first step toward establishing state oversight of those local systems and providing some state funding to assist local governments with the costs.

In March 2016 and taking effect in May of that year, Utah legislators created the Utah Indigent Defense Commission (IDC) as the first-ever state-level body in Utah that has responsibilities for the right to counsel. The commission is in the executive branch of government and is within the Commission on Criminal and Juvenile Justice.

The other two voting members are:

The two ex officio non-voting commission members are: a representative from the Administrative Office of the Courts, appointed by the Judicial Council; and the director of the UIDC itself. Commissioners serve staggered four-year terms, such that approximately half of the members are appointed every two years. The initial voting members of the commission were appointed and confirmed during the summer and fall of 2016.

The commission hires a director, who must be an attorney, to oversee the state office. That director is then responsible for hiring staff as necessary to carry out the duties of the commission. UIDC hired its first executive director in October 2016.

The overarching purpose of the commission is to “assist the state in meeting the state’s obligations for the provision of indigent criminal defense services.” Toward that end, the commission has three primary areas of responsibility: (1) to adopt statewide principles (although they are to be “guiding” or “advisory,” rather than mandatory) for public defense services, including guidelines for attorney caseloads and delivery of services; (2) to evaluate the local public defense systems to determine the extent of their compliance with the commission’s principles, and then to collect and report data about the extent of that compliance; and (3) to create and oversee a system for local governments to apply for state grant funds.

Notably, the 2016 enabling legislation limits the commission’s authority to “indigent criminal defense services,” i.e., adult felony and misdemeanor cases, and does not include oversight of public defense in juvenile cases.

Utah’s counties and municipalities are initially responsible for the full cost of providing all right to counsel services. The Utah Association of Counties reports that, in 2015, the counties budgeted a combined $29.4 million on indigent defense, reflecting an increase in spending of 65 percent from ten years earlier. At a 6% increase per year, counties would likely spend $31,164,000 in 2016 and $33,033,840 in 2017.

Effective May of 2016, the legislature created the state-level “Indigent Defense Resources Restricted Account” within the state’s general fund. Deposits to that account come from two sources: (1) state general fund appropriations; and (2) any funds the Utah Indigent Defense Commission (IDC) is able to obtain from other sources such as private or federal funding. The state’s first general fund appropriation in 2016 was for $2 million.

The IDC administers the fund and can use it to carry out the duties of the IDC (such as paying their staff and operating a statewide data system) and to make grants to local public defense systems to help them pay for attorneys and defense resources. Of note, under the 2016 enabling legislation, the IDC can only administer grants for adult felony and misdemeanor right to counsel services, and not for juvenile representation.

Local governments are not required to ask for state financial assistance. Called “nonparticipating systems,” these local governments nonetheless are responsible for meeting the commission’s minimum principles for effective representation, but they continue to bear the full cost of doing so.

If local governments want to apply to the IDC for state grant funds, they must commit to meeting the commission’s principles for effective representation and they must not reduce the amount of local funding for indigent defense below what they were spending in 2016 before the commission was created (called the “baseline budget,” and adjusted each year for population growth and inflation). These are called “participating systems,” and they can apply for two types of grants: (1) matching fund grants; and (2) critical need grants.

Critical need grants are to help local governments meet the commission’s minimum standards for effective representation when the local government would have to spend more than its baseline budget to do so and that would be “an undue burden.”

Juab County was the first to apply to the IDC for a state funding grant in 2016.

For (adult) felony and (juvenile) delinquency representation, each of Utah’s twenty-nine counties contracts with one or more attorneys or law firms to provide indigent defense services. The two most populous counties each contract with a nonprofit law firm that in essence serves as the county’s public defender office, the Salt Lake Legal Defender Association in Salt Lake County (Salt Lake City) and the Utah County Public Defenders Association in Utah County (Provo). Most counties enter into several annual contracts directly with a handful of individual private attorneys who are each paid a flat-fee to represent all of the indigent cases they are assigned during the year. A smaller number of counties each contract with one private attorney to serve as a coordinating attorney, and that attorney can then subcontract with as few or many other attorneys as he sees fit to cover all of the indigent cases in the county.

Misdemeanor representation can be the responsibility of the county or of a municipality or both. Counties are responsible for providing counsel to the indigent for A-level misdemeanors (carrying up to one year in jail). Any incorporated town or city can establish a local justice court that can hear, among other things, B- and C-level misdemeanors (carrying up to six months and up to ninety days in jail, respectively) that occur within their corporate limits, and if they have such a court they are responsible for fulfilling the right to counsel. In unincorporated areas of a county and when there are no city/town justice courts, the county is responsible for fulfilling the right to counsel in B- and C-level misdemeanors in the county justice court. With the exception of the more urban parts of the state, each local government usually contracts with a single private attorney to represent all indigent misdemeanor defendants in their local courts. Often, the same private attorney has contracts with many (if not all) townships in the county, handling one court’s cases on one day before moving to another’s the next day.

When the Utah legislature created the Utah Indigent Defense Commission (IDC) in 2016, it directed the commission to encourage and help local governments to establish regional right to counsel systems – cooperative agreements among two or more local governments to jointly provide services – in order to provide effective representation while reducing costs. 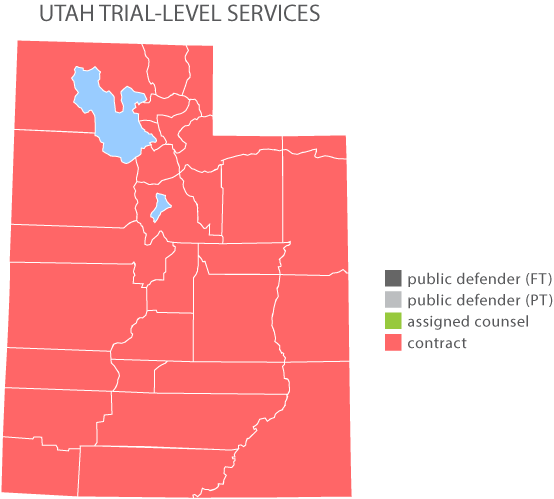 6AC Views on News from Utah