The Virginia Indigent Defense Commission (VIDC) is an independent body in the judicial branch that is responsible for delivery of right to counsel services across the state. The 14 commission members are appointed by diverse authorities: the chairmen of the House and Senate Committees for Courts of Justice each have an appointment; the chairman of the Virginia State Crime Commission; the executive secretary of the Supreme Court; the Virginia State Bar (two attorneys); Governor (2 appointees); the Speaker of the House of Delegates (3 appointees); and, the Senate Committee on Rules (3 appointees). The commission has authority to set standards and to enforce compliance against those standards through its central office in Richmond.

Where a local public defender office is established, the head of that office is selected by a temporarily constituted local hiring committee on which the executive director of the Virginia Indigent Defense Commission (VIDC) also sits. There are also four capital defender offices to provide representation to the indigent in death penalty cases.

Where there is no public defender office and to handle conflicts where there is such an office, the VIDC executive director administers a statewide roster of private attorneys who are qualified to handle right to counsel cases. 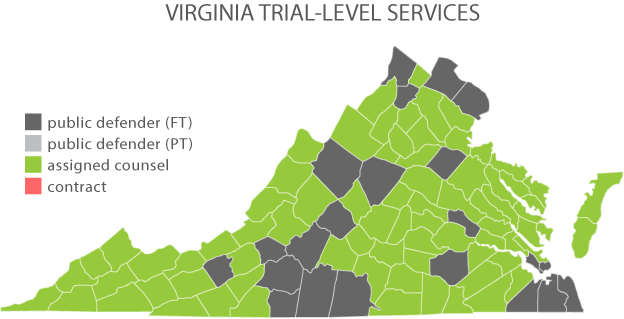 Among all of the states and territories, only Virginia does not expressly provide a right to counsel in criminal cases in its Constitution.

Learn about systemic litigation in the States & Territories
Top