The Wisconsin State Public Defenders (SPD), an executive branch agency with its central administration in Madison, is responsible for providing all right to counsel services throughout the state. The Governor, with advice and consent of the Senate, appoints nine people to the Public Defender Board that oversees the SPD. The board appoints the chief public defender of the SPD, who is responsible for carrying out the board’s policies and directives. 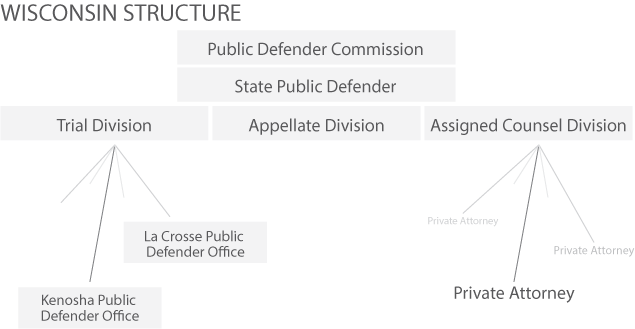 The SPD was legislatively created in 1965 in the immediate wake of the Gideon decision, initially as a system to provide counsel in post-conviction appeals. In 1979, the legislature transformed SPD into the state agency it is today.

Primary right to counsel services throughout Wisconsin are provided by attorneys who are employees of the Wisconsin State Public Defender (SPD). SPD has 35 local public defender offices to handle trial level services.

For conflict cases, SPD has an Assigned Counsel Division set apart from the primary system through ethical screens that oversees private attorneys who are appointed on a case-by-case basis. Private attorneys are paid in one of two ways: either an hourly rate; or (in misdemeanor cases only) a flat, per case contracted amount. Wisconsin has the lowest assigned counsel compensation rate, at $40 per hour, of any of the fifty states. The state legislature has not approved an increase in the current rate of pay since 1995. And even then, in 1995, the legislature actually decreased assigned counsel rates for in-court work from $50/hour to the current $40/hour. SPD has 58 fixed fee contracts covering approximately 10,000 cases. 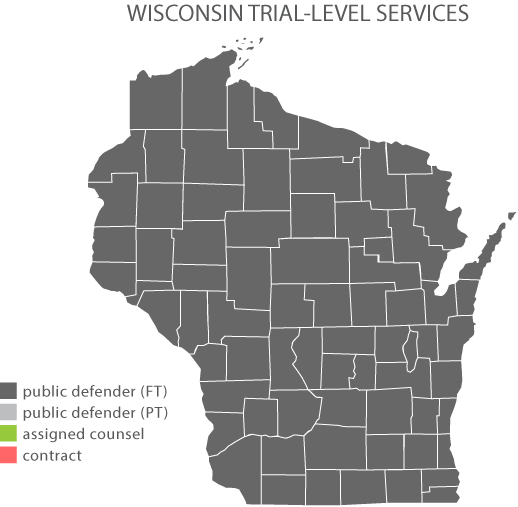 6AC Views on News from Wisconsin