Providing the Sixth Amendment right to effective counsel is a state obligation under the Fourteenth Amendment. Nonetheless, Mississippi has made its counties and cities responsible for providing trial level Sixth Amendment services in all but capital cases.

When a state chooses to place this responsibility on its local governments, then the state must guarantee that the local governments are not only capable of providing adequate representation, but that they are in fact doing so. The State of Mississippi has no method of ensuring that its local governments meet the state’s constitutional obligations and, except in capital cases, has not established any statewide standards for the provision of Sixth Amendment right to counsel services in its trial courts. 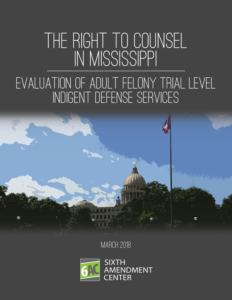 The absence of institutionalized statewide oversight does not necessarily mean that all right to counsel services are constitutionally inadequate. It does mean that the State of Mississippi simply does not know whether its services meet the requirements of the Sixth Amendment. At the request of the Mississippi Public Defender Task Force, the Sixth Amendment Center, in partnership with the Defender Initiative at Seattle University School of Law, evaluated adult felony trial level indigent defense services throughout Mississippi. The Task Force selected ten counties as a representative sample of Mississippi’s diversity in population size, geographic location, rural and suburban and urban centers, and types of indigent defense representation delivery systems used. Those counties were: Adams, Clarke, DeSoto, Forrest, George, Harrison, Hinds, Leflore, Lowndes, and Pearl River.

A principal finding of the report is that indigent defendants charged with felony offenses are denied the right to counsel at the critical pretrial stage between arrest and arraignment following indictment, a period that is commonly at least a few months and occasionally as long as a year or more. The Mississippi Constitution requires that felony prosecutions be instituted by a grand jury indictment. A large amount of time can pass between an indigent felony defendant being arrested and/or bound over, and a grand jury returning an indictment, while Mississippi law does not impose any limits on the amount of time that process can take. On average, the delay between arrest and grand jury indictment in the ten studied counties ranges from two months to over a year. Yet the greatest majority by far of indigent felony defendants in Mississippi never have an attorney working on their behalf prior to their arraignment in circuit court. Instead, during the entire period between a felony arrest and the arraignment on indictment, indigent felony defendants fall into a “black hole” in which they are not represented by an attorney.

Attorneys in judicially controlled indigent defense systems often, consciously or unconsciously, follow or adjust to the needs of each judge in each court, rather than focus on providing constitutionally effective services for each and every defendant. Fearing they may lose their job if they displease the judge who hires them, defense attorneys bring into their calculations what they think they need to do to stay in the judge’s favor. When public defense attorneys take into consideration what must be done to please the judge in order to get their next appointment or hold on to their contract, by definition they are not advocating solely in the interests of their indigent clients, as is their ethical duty.

Judicial interference in Mississippi is compounded by the lack of uniform standards to ensure that felony indigent defense attorneys have the necessary qualifications, skill, experience, and training to match the complexity of the cases they are assigned. Mississippi does not require any particular procedures for selecting the attorneys who provide representation to indigent defendants and does not mandate that they have any particular qualifications for being assigned to any cases (except death penalty cases). In other words, even an attorney newly graduated from law school and having just passed the bar examination can be assigned to represent an indigent defendant in the most serious of felony cases, including cases where the defendant faces life in prison if convicted. Indeed, throughout the ten counties studied closely in this evaluation, attorneys just out of law school, or with no criminal experience at all, are selected by the judges to represent indigent defendants in the full range of felony cases from the least to most serious.

Moreover, the State of Mississippi does not ensure that, once they are appointed, felony indigent defense attorneys have sufficient time and resources, including investigators and social work services, to provide effective representation. National standards explain that every defense attorney has a duty to independently investigate the facts of a client’s case. An attorney may have to call witnesses that the attorney identified and questioned during this investigation to testify at trial, and the attorney must be prepared to controvert the witness’s testimony if the witness says something different on the stand. Because the attorney cannot testify, the attorney must always have an investigator present during witness interviews, so that the investigator can testify at trial if needed. Yet in almost all cases except murders, indigent felony defense attorneys in the studied counties never hire investigators and have no time to investigate cases themselves. They have no time because the majority of attorneys are carrying excessive caseloads.

Despite these systemic deficiencies, the authors remain optimistic that state policymakers and criminal justice stakeholders can reform the system. The authors recommend that the Mississippi Public Defender Task Force should offer a legislative proposal to ensure effective state oversight of indigent defense services, including:

Finally, the 6AC and SUSL strongly urge statutory changes that would decrease the overall need for right to counsel services. Such changes should include increased diversion and reclassification of crimes, to make certain violations ineligible for incarceration.

The Right to Counsel in Mississippi: An Assessment of Adult Felony Trial Level Indigent Defense Services (March 2018), is available from the Sixth Amendment Center in electronic format only.