Posted on February 6, 2013 by David Carroll Posted in Pleading the Sixth

In January 2013, a bill was filed in the Missouri House of Representatives that would, among other things, significantly change how indigent defense services are provided in the state.  The proposed legislation would restrict representation by the state public defender to only the most serious felonies while giving the executive branch the authority to contract out representation in all other case-types, including non-sexual class C and D felonies, all misdemeanor cases, appeals, and all probation violation cases.

The bill is a direct response to the events of the past year in Missouri.  To re-cap, a state supreme court decision in July 2012 gave the state public defender commission the authority to declare itself unavailable to accept new case assignments from the court when it already has too many.  However, the state public defender’s attempts to define exactly how many cases are “too many” were met with significant scrutiny from criminal justice stakeholders – and in particular from the prosecuting attorneys association who called upon the legislature to do exactly what the new bill proposes.

However, moving from an overwhelmed and underfunded public defender model to a low-bid contract model only makes sense if you ignore the requirements of the Sixth Amendment to the U.S. Constitution to provide a minimum level of quality representation to all defendants.  That is, the “crisis” to be addressed is not that the state public defender is demanding too many resources, but rather that poor people are not being afforded adequate representation.  Changing delivery service models without reference to national standards like the American Bar Association, Ten Principles of a Public Defense Delivery System, simply changes the way in which people of limited means have their rights restricted.  Overwhelmed private contract attorneys are just as incapable of providing effective services as overwhelmed public attorneys.  The proposed remedy does not alleviate the failure of Missouri to provide for a fair day in court to the indigent accused.

The State Bar weighs in

Part of any sustainable solution for Missouri’s ongoing fiscal and workload crisis, as with any state facing the same struggles, is to lessen the need to declare unavailability in the first place.  This can be done by decreasing the number of cases coming into the criminal courts that require appointed counsel.  The balance of the Bar’s recommendations enumerate ways to do just that. For example, a traditional staffed public defender system cannot handle every single case that comes down the road.  That is, an attorney cannot ethically represent co-defendants whose interest may be at odds with one another.  Most statewide systems that use a public defender model for providing primary services use an assigned counsel panel or contract attorneys to handle all conflicts.  Missouri, however, assigns its conflict cases to neighboring public defender offices.  Such a practice violates ABA Principle 2, which requires that where the “caseload is sufficiently high,” that a “public defense delivery system consists of both a defender office and the active participation of the private bar.”  The Bar seeks to meet Principle 2 by having private attorneys handle all conflicts under contract to the public defender commission.  As opposed to the privatization plan being considered by the legislature, the Bar plan would both maintain Principle 1’s demand that the defense function be independent and meet ABA Principle 8’s requirement that contracts “never be let primarily on the basis of cost.”

Having all conflicts going in the first instance to private counsel under contract will reduce an immediate burden on the offices. And to increase the number of private attorneys willing to take conflict cases, the Bar recommends that the legislature enact “statutory change to the State Legal Expense Fund to include coverage for contract and appointed counsel in criminal matters, or otherwise provide malpractice protection for appointed counsel.”  (The state self-insures and provides malpractice coverage for both public defenders and for private attorneys who take cases pro bono, but by regulation, the Attorney General has in the past excluded those who are appointed by the courts to take criminal cases.  The Bar’s recommendation would reverse that regulation.)

The Bar Task Force also recommends that the state public defender only provide representation “in probation and parole violation/revocation cases … where representation is constitutionally required.” Currently, state statute requires the public defender represent anyone that is detained or charged with a violation of probation or parole.  This is actually a broader right to counsel than is required by the U.S. Supreme Court case law.   Gagnon v. Scarpelli mandates that an individual on probation has a right to the assistance of counsel during probation revocation hearings when a court determines that due process requires it. In much the same way, the U.S. Supreme Court determined this right attached (to some extent) for parolees facing revocation of their paroles in 1972’s Morrissey v. Brewer.  The Bar is recommending legislative changes to have state law match the prevailing U.S. Supreme Court case law. 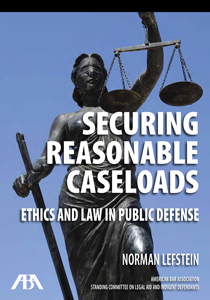 Because these recommendations are coming from a Bar Task Force with representation by prosecutors, judges and public defenders, it is hoped that these recommendations will allow for cooler heads to prevail when it comes to public defender resources.   The Sixth Amendment Center (6AC) is particularly concerned that the legislative plan to privatize much of the state public defender’s work is coming from the prosecution.  The 6AC has seen many indigent defense reform efforts aided by prosecuting attorneys and in no way is suggesting that all prosecutors in Missouri are trying to undermine their courtroom adversaries.  We simply direct the leadership of the Missouri Association of Prosecuting Attorneys to the words of Norm Lefstein, Dean Emeritus of Indiana University School of Law in his seminal work Securing Reasonable Caseloads: Ethics and Law in Public Defense:

The black-letter of the ABA Standards Related to the Prosecution Function provide that “[t]he duty of the prosecution is to seek justice, not merely to convict.”  And that “[i]t is an important function of the prosecutor to seek reform and improve the administration of criminal justice. …”  The commentary to the foregoing standards stress that “the prosecutor’s obligation is to protect the innocent as well as to convict the guilty, to guard the rights of the accused, as well as to enforce the rights of the public.”  Prosecution opposition to defense efforts to reduce their caseloads, especially when the evidence of excessive caseloads is compelling, violates the spirit of the foregoing provisions.