Providing the Sixth Amendment right to effective assistance of counsel is a state obligation under the Fourteenth Amendment. Nonetheless, Nevada has left it to each of the cities and rural counties to determine how to provide the right to counsel in the courts located within their geographic boundaries. When a state chooses to place this responsibility on its local governments, then the state must guarantee that the local governments are not only capable of providing adequate representation, but that they are in fact doing so.

The State of Nevada has no method of ensuring that its local governments meet the state’s constitutional obligations. The State of Nevada must, at the very least, have an entity authorized to promulgate and enforce systemic standards. No such entity currently exists. Moreover, the State of Nevada does not require uniform indigent defense data collection and reporting. Without objective and reliable data, right to counsel funding and policy decisions are subject to speculation, anecdotes and potentially even bias. For trial level services, the State of Nevada has only very limited oversight of primary representation (not conflict representation) in just the two jurisdictions (Carson City and Storey County) that use the state public defender office. Yet the state public defender system suffers from undue political interference and inadequate funding. 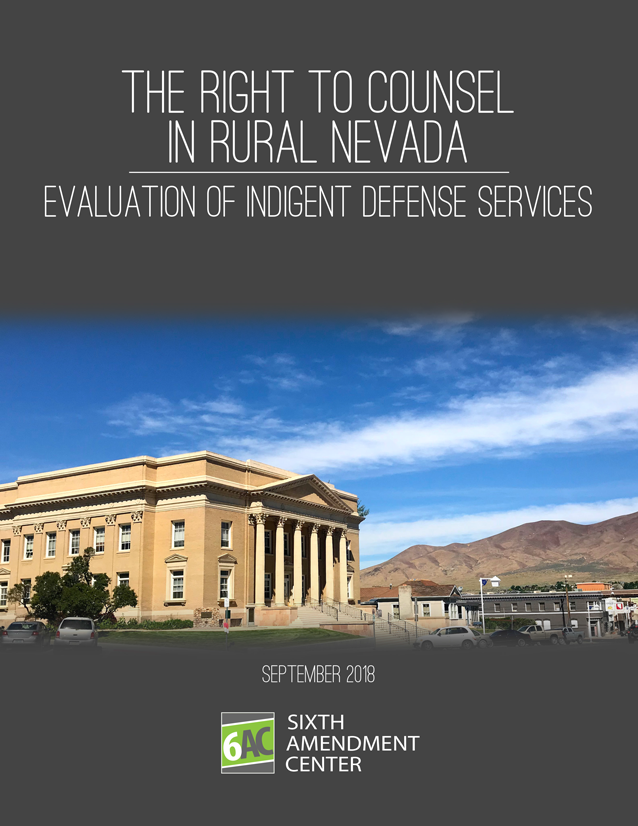 Only the three rural counties of Elko, Humboldt, and Pershing have a county funded and administered public defender office, furnished and equipped at government expense and staffed by full-time government employees who receive a salary and benefits. Churchill, Douglas, Esmeralda, Eureka, Lander, Lincoln, Lyon, Mineral, Nye, and White Pine counties instead provide right to counsel services by contracting with private attorneys for a fixed annual fee and out of which the attorney must provide all overhead necessary to serve as an attorney. In many instances, these contract attorneys are also responsible for paying for much of the case-related expenses that are necessary to the defense of the indigent defendants whom they are appointed to represent.

Nevada’s decades of efforts to ensure the effective assistance of the right to counsel have been a critical prelude to the issues that confront the rural counties today. Most of the attempts to fix systemic deficiencies in the state’s right to counsel systems have been made by the Nevada Supreme Court. But it is only one of the three branches of state government. The court does not have the power of the purse and cannot, because of separation of powers concerns, tell the legislature how to spend taxpayer resources.

Rural actors and policymakers are wary of efforts to force rural counties to use the services of the state public defender, even if that office were fully funded by the state. Decisions by rural policymakers to move out of the state public defender system have not been based solely on a desire to provide services as inexpensively as possible. Rather, five and a half decades of expanding right to counsel responsibilities under both federal and state law, in interaction with changes in Nevada’s statutory law, have led county after county to strike out on their own in legitimate attempts to ensure adequate right to counsel services where the state has failed to do so.

Without guidance from the State of Nevada on how to create local structures that meet the parameters of the Sixth Amendment, the local indigent defense systems suffer to various degrees with:

The Right to Counsel in Rural Nevada: Evaluation of Indigent Defense Services (September 2018), is available from the Sixth Amendment Center in electronic format only.