Posted on October 18, 2012 by David Carroll Posted in Pleading the Sixth

Pleading the Sixth: Advocates in New Mexico have tried for years to insulate the state public defender from undue political interference with no success.  So now the voters will decide whether to amend the state constitution to require the legislature to create an independent, statewide public defender commission.  Three of the four largest newspapers in the state have already endorsed the idea.

“Nobody ever campaigned on a ‘give defendants their day in court’ platform,” proclaimed the October 13, 2012 edition of the Albuquerque Journal in an editorial advocating New Mexico’s electorate to amend the state constitution to require the legislature to create an independent indigent defense commission and to get politics out of the day-to-day operations of the state’s public defender system.  An October 8th, 2012 editorial in the  Las Cruces Sun-News is also advocating a “yes” vote to amend the constitution because the Sixth Amendment right to counsel “should not be subject to the political whims of the executive.” And, the Santa Fe New Mexican echoed this position in an editorial on October 16th, stating simply that public defenders should “be able to do the work they are charged to do without political interference.”

The right to counsel in New Mexico

In Polk County v. Dodson, 454 U.S. 312 (1981), the United States Supreme Court found that states have a “constitutional obligation to respect the professional independence of the public defenders whom it engages,” observing that a “public defender is not amenable to administrative direction in the same sense as other state employees.”  As the U.S. Supreme Court made clear in Polk County, “a defense lawyer best serves the public not by acting on the State’s behalf or in concert with it, but rather by advancing the undivided interests of the client.”

Politics has often trumped the independence of the right to counsel system in New Mexico.  The Public Defender Department (PDD) is a state-funded, state-administered indigent defense system that provides services through a combination of state-employed public defenders (in urban and transitional areas) and contract attorneys (for conflict representation and for primary services in rural parts of the state).  According to its website, the Public Defender Department is the state’s largest law firm, employing over 330 people, contracting with 170 private attorneys and operating a $39 million budget. However, NMSA 31-15-4 requires that the PDD chief executive be a direct political appointee of the Governor and serve at the Governor’s will.  And as opposed to the other eight state-funded, state-administered public defense systems whose chief defenders are politically-appointed (Alaska, Delaware, Iowa, New Jersey, Rhode Island, Vermont, and Wyoming) the New Mexico Governor has the authority to also fill any vacancy in the office of the chief — which means that the Governor appoints all of the district defender positions as well.

When chief defenders are appointed and serve at the will of the Governor, the chief understands that she must keep the Governor happy to keep her job.  Thus, if a Governor puts forth a budget that is inadequate for providing effective assistance of counsel, the chief defender must either accept the budget or take a public position in opposition to the person who can terminate her employment.  Indeed, this scenario took place in February of 2011 when then-chief public defender, Hugh Dangler, was terminated by the current New Mexico Governor in the middle of the legislative session for suggesting that the PDD was underfunded, as reported in the February 17, 2011 Santa Fe Reporter:

I fear that I was not taking positions that the Governor liked in various obligations for the [Chief] Public Defender,” Dangler says. “We have a very, very bad budget crisis, and I was testifying last week in front of the various committees. In fact it’s kind of interesting that my firing comes the week after my testimony. And I basically said, ‘We can’t make it with the budget we’ve been offered by either the [Legislative Finance Committee] or the Governor. And I think you’re supposed to say that, ‘Of course, we support the Governor’s option.’

The undue political interference on the right to counsel in New Mexico is not a partisan issue as Governors from both the Republican and Democratic parties have seen fit to replace sitting public defenders.  In fact, former Governor Bill Richardson, a democrat, vetoed a bill passed on an overwhelmingly bi-partisan basis that would have created an independent statewide public defender commission, as required under national criminal justice standards.

The American Bar Association’s Ten Principles of a Public Defense Delivery System, explicitly states that the “public defense function, including the selection, funding, and payment of the defense counsel, is independent.”  In the commentary to this standard, the American Bar Association (ABA) notes that the “public defense function “should be independent from political influence.” 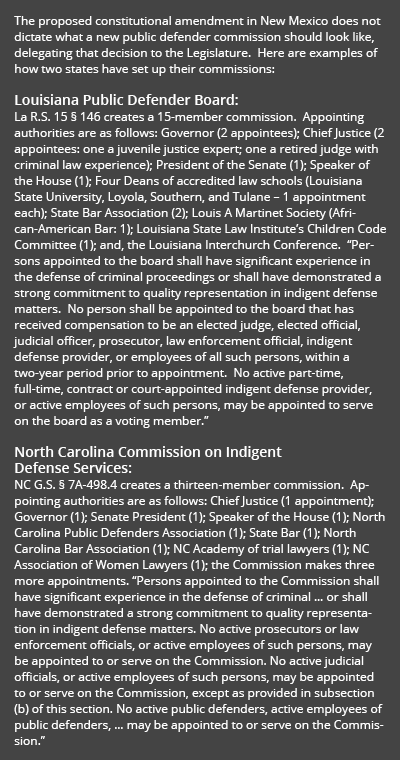 Footnotes to ABA Principle 1, reference the National Study Commission on Defense Services’ Guidelines for Legal Defense Systems in the United States (1976).  The Guidelines were created in consultation with the United States Department of Justice (DOJ) under a DOJ Law Enforcement Assistance Administration (LEAA) grant.  Guideline 2.10 (The Defender Commission) states that “a special Defender Commission should be established for every defender system, whether public or private,” and that the primary consideration of appointing authorities should be “ensuring the independence of the Defender Director.”

The same Guideline states that defender commissions should “consist of from nine to thirteen members,” made up of a “diversity of factions in order to ensure insulation from partisan politics.”  Specifically, “[n]o single branch of government should have a majority vote on the commission.”  To avoid conflicts of interests, the NSC Guidelines require that the “Commission should not include judges, prosecutors, or law enforcement officials.”

“The primary function of the Defender Commission should be to select the State Defender Director (Guideline 2.11),” and the commission should not  “interfere with the discretion, judgment and zealous advocacy of defender attorneys in specific cases.”  Guideline 2.12 states that the defender director should serve for a term of between 4-6 years and should never be removed from office “without a hearing procedure at which good cause is shown.”

The constitutional imperative for the independence of the defense function was, perhaps, best summed up in Justice Sandra Day O’Conner’s dissent in Georgia v. McCollum, 505 U.S. 42 (1992): “[M]oreover, we pointed out that the independence of defense attorneys from state control has a constitutional dimension.  Gideon v. Wainwright, 372 U.S. 335 (1963), ‘established the right of state criminal defendants to the guiding hand of counsel at every step in the proceeding against [them].’ Implicit in this right ‘is the assumption that counsel will be free of state control.  There can be no fair trial unless the accused receives the services of an effective and independent advocate.”

Pleading the Sixth will keep you updated to see if New Mexico’s voters will heed the words of Justice O’Connor who concluded, “the defense’s freedom from state authority is not just empirically true, but it is a constitutionally mandated attribute of our adversarial system.”