Serious problems exist today in rural Nevada when it comes to providing attorneys to poor people who face the potential loss of liberty at the hands of the criminal justice system.  The indigent accused may sit in jail for several weeks or even months, waiting to speak to an attorney while witnesses’ memories fade and investigative leads go cold. 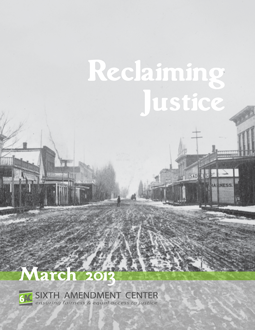 Once the defendant is appointed an attorney, that individual defendant may be one of several hundred who are all vying at the same time for the attention of that single attorney.  Worse, the overburdened attorney will often have financial conflicts that pit his ability to put food on his family’s dinner table against his ethical duty to zealously advocate solely in the best interests of his client.

Suffice to say, in this 50th anniversary year of the U.S. Supreme Court’s decision in Gideon v. Wainwright, establishing the right to the assistance of a qualified public lawyer as a federal mandate, this mandate has gone unfulfilled for decades in rural Nevada.

A new report produced by the Sixth Amendment Center on behalf of the Nevada Supreme Court, Reclaiming Justice, demonstrates that the serious systemic deficiencies plaguing rural counties are a relatively recent development (beginning in 1975) and a turning away from Nevada’s longstanding history of ensuring equal justice to people of insufficient means. In fact, while the federal right to counsel in state court proceedings celebrates its 50th anniversary, this same right had been established in Nevada nearly 100 years before the 1963 Gideon decision.

Released on March 22, 2013, Reclaiming Justice tells the story of how an indigent defendant, named Shepherd L. Wixom, accused of stagecoach robberies in Lander County in 1873 fought for the right to an attorney to advocate on his behalf, and how the reaction of the Nevada legislature and Supreme Court to secure a fair day in court for poor people far predates any federal action on the issue. Indeed, as early as 1875 to 1879 Nevada was the very first state in the union to authorize the appointment of attorneys in all criminal matters, including misdemeanors, and also required the payment of attorneys for the services rendered.

David Carroll, executive director for the Sixth Amendment Center stated, upon the release of the report, “Reclaiming Justice shows that the people of Nevada have always viewed the right to counsel not as a federal mandate to be resisted, but as a bedrock principle upon which the state was founded. Nevadans should embrace this history and this view today.” Carroll concluded, “We hope the recommendations set out in Reclaiming Justice contribute to the restoration of Nevada’s deep-rooted commitment to due process and that justice in rural Nevada will – once again – no longer depend on the amount of money one has in his pocket.”

Download the full report: Reclaiming Justice: Understanding the History of the Right to Counsel in Nevada so as to Ensure Equal Access to Justice in the Future 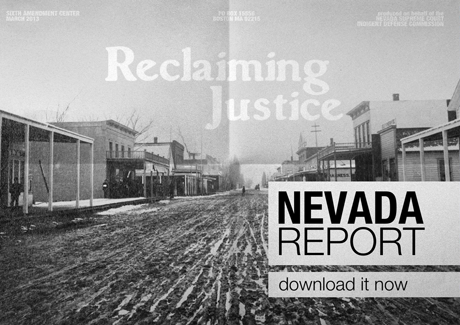 Reclaiming Justice is available from the Sixth Amendment Center in electronic format only. For your convenience, in addition to providing a full PDF version for download, we have posted the entire contents online. See Table of Contents below.

(Please note: endnotes included in the downloadable version above are omitted from the website version for easier online reading. If you wish to review the endnotes, please download a PDF copy of the full report free of charge.)

Listen to a conversation with David Carroll, 6AC executive director, about Reclaiming Justice. We discuss the genesis of the report, how he came to discover that Nevada's right to counsel history still has such relevance today, and what insight people outside of Nevada can gain from reading Reclaiming Justice.