For the signers of the Declaration of Independence, liberty was the universal notion that every person should determine their own path to happiness, free from undue governmental control. Patrick Henry preferred death to living without it. In fact, liberty is 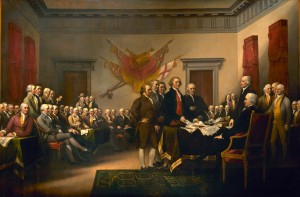 so central to the idea of American democracy that the framers of our Constitution created a Bill of Rights to protect personal liberty from the tyranny of big government. All people, they argued, should be free to express unpopular opinions or choose their own religion or take up arms to protect their home and family without fear of retaliation from the state. As Thomas Jefferson wrote in 1787, “a bill of rights is what the people are entitled to against every government on earth, general or particular, and what no just government should refuse.”

Preeminent in the Bill of Rights is the idea that no one’s liberty can ever be taken away without the process being fair. A jury made up of everyday citizens, protection against self-incrimination, and the right to have a lawyer advocating on one’s behalf are all American ideas of justice enshrined in the first ten amendments to the United States Constitution that were ratified by the states in 1791. Years earlier, John Adams had risked his reputation for these very ideals by defending in court the British soldiers involved in the Boston Massacre, stating that a defense lawyer ought to be the last thing a person should be without in a free country.

Why did Adams and other patriots believe so fervently in the primacy of the right to counsel to due process? The answer comes from an understanding of the English common law system, out of which most American jurisprudence evolved. England’s courts, during the American pre-colonial period, were going through a transition away from what we today call the inquisitorial model of criminal justice. Still in use in France and elsewhere in Europe today, the inquisitorial model sets about finding the truth behind an alleged crime by having the judge who is in charge of all proceedings directly question the witnesses for both the victim and the defendant. Lawyers, if they were involved at all in English courts during this time, generally played a limited role. For example, there was no person we would recognize today as the prosecutor. Instead, the victim of a crime or his family was permitted to hire a lawyer to act as prosecutor, but few could afford the cost. And so the judge dominated the proceedings.

Under the inquisitorial model, the judge acted as the chief investigator and oversaw the collecting of evidence, determining what was reliable and what was unreliable. And, because the judge made final verdicts based on the evidence he himself collected, there was a presumption of guilt inherent in the trial proceedings. In the pre-colonial English system of justice, therefore, the burden of proof rested with the defendant accused of a crime to establish his own innocence. Making that task harder, defense lawyers were specifically banned in felony cases in England (and would continue to be until 1836).

Because the European people that arrived on the shores of America were, in many instances, those who had been subject to religious persecution in European courts, the presumption of guilt was never going to work here. The Enlightenment was in bloom and people had begun questioning the tyranny of the crown, so the colonial settlers were, perhaps, predisposed to take a more adversarial approach to criminal justice. The people of the new American colonies were suspicious of concentrated power in the hands of a few. An individual’s right to liberty was self-evident, and there needed to be a high threshold to allow a court to take away the liberty that the Creator had endowed to each and every individual. The new colonies were not going to set up justice systems that would railroad defendants simply because the accused was ignorant of the law.

Whereas it doth appeaere that any person . . . may on good grounds, or through mallice or envie be indicted and accused for matters criminal, wherein the person is so [accused] may be innocent, and yett, may not be accomplished with soe much wisdom and knowledge of the law to plead his own innocencye, & c. Be it therefore inacted . . . that it shall be accounted and owned from henceforth the lawful privilege of any man that is indicted, to procure an attorney to plead any point of law that make for clearing of his innocencye.

As defense lawyers became increasingly involved in the early days of American jurisprudence, procedural rules started to be written down and codified. Evidence, including hearsay, could no longer be introduced without restraint. The presumption of guilt was increasingly contested. This was the birth of the adversarial system of justice that we recognize in our own country today. The adversarial justice system is based on the simple notion that the truth will best be made clear through the back and forth debate of opposing perspectives. Indeed, this idea of competition soon became the basis of American capitalism too. So, when the North American colonies revolted from the crown, the right to counsel was quickly enshrined in all but one of the original thirteen state constitutions.

If the right to counsel was state law, why was it important for the federal Congress to incorporate this same right as an amendment to the U.S. Constitution? The citizens of the newly independent republic had created a federal government to administer the union of their respective state governments. Having just liberated the Colonies from what they felt was the tyrannical rule of the British government, the framers of our federal Constitution were loath to create a new tyranny in the form of the Union’s central government that could ignore – or worse, could abolish – these protections of personal liberty. Therefore, the Bill of Rights was created to protect the rights of the individual against an overreach of big government. With the ratification of the Bill of Rights, the right to counsel became sacrosanct. The federal government was obligated to enforce it for all time.

At this point in history, the right to counsel was permissive. That is, the accused had the right to have a lawyer present if the accused could afford to hire one or could get one to represent him for free, but a state did not have to appoint an attorney if the accused could not obtain his own. The question of whether to appoint counsel to those of insufficient means was left up to each state. As United States Supreme Court Justice Louis Brandeis wrote in 1932: “It is one of the happy incidents of the federal system that a single courageous state may, if its citizens choose, serve as a laboratory; and try novel social and economic experiments without risk to the rest of the country.” Nevada would become that courageous state in regard to equal justice for the indigent accused. 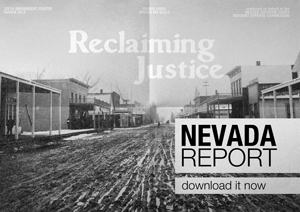