Posted on May 1, 2015 by Elly Kalfus Posted in Pleading the Sixth 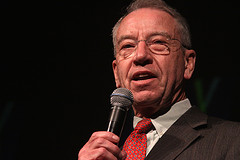 Senator Chuck Grassley (R) of Iowa, Chairman of the Senate Judiciary Committee, spoke about the need for indigent defense reform during his remarks at the National Press Club Newsmakers News Conference on April 27.

Sen. Grassley emphasized the importance of helping “indigent defendants who are not being provided with counsel as the Constitution requires,” explaining that when states violate the Sixth Amendment, innocent people may be convicted and face collateral consequences. Sen. Grassley said the Senate Judiciary Committee will hold a hearing in upcoming weeks “to explore this problem and look at potential solutions.”

Sen. Grassley has spoken about the indigent defense crisis in the past, including last month during his remarks on the Senate floor during a discussion of Mandatory Minimum Sentencing reform.

“. . . [I]t is particularly at the state level where the Sixth Amendment is violated numerous times on a daily basis. I cannot think of any Supreme Court decision that has ever faced such resistance in magnitude and time as Argersinger v. Hamlin. Indigent misdemeanants are being pressured to waive counsel. . . . Then there is the question of the competence of the counsel appointed, given how many cases are assigned to an individual lawyer and how quickly judges resolve them.”

As Sen. Grassley said, the Senate Judiciary Committee has a unique responsibility to “the poor defendants wondering if they truly have a chance in their day in court.” By addressing what former Attorney General Eric Holder and many others have referred to as the “state of crisis” in which America’s indigent defense exists, the Committee could ensure the Sixth Amendment right to counsel enshrined in the Constitution does not continue to go ignored.