Posted on June 17, 2016 by David Carroll Posted in Pleading the Sixth

Pleading the Sixth: On June 17, 2016, the New York Assembly passed a bill requiring full state funding of indigent defense services, after the Senate passed the measure the previous night. Will Governor Cuomo sign it into law?

On June 17, 2016, the New York State Assembly unanimously passed A10706 requiring the state to take over responsibility for all funding of the right to counsel for indigent people. The Senate unanimously passed a similar bill (S08144) the previous night. Now the law goes to the Governor for signature. Though it is anyone’s guess whether Governor Cuomo will sign or veto the law, with unanimous support out of both houses, state responsibility for funding the right to counsel in New York should be veto-proof.

The plan to transfer funding from county to state

The legislation expressly observes that: 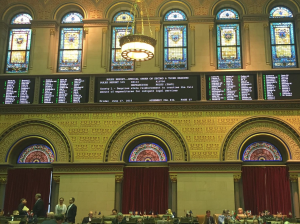 In 2010, the legislature created the Office of Indigent Legal Services (ILS) as a state level agency and gave it limited authority to gather statewide information about provision of right to counsel services, to make recommendations to improve the delivery of services, and to distribute limited state funds to counties to improve the quality of services. The ILS distributed state funds in three ways: (i) “non-discretionary distributions” to all counties in percentages established by the legislature, with this funding scheduled to end in 2015; (ii) “discretionary distributions” to all counties for quality enhancement to help counties achieve recommended standards; and (iii) competitive grants awarded to counties that were developing innovative solutions to specific needs or shortcomings in indigent defense services.

Then, in October 2014, the State of New York settled the class action lawsuit Hurrell-Harring v. New York that alleged defendants were being deprived of their right to counsel in five upstate counties. (Learn more about the Hurrell-Harring case here.) As part of that settlement, the state was required to provide additional funding in the five counties to correct deficiencies, and ILS was responsible for assisting the implementation of the settlement agreement. As the legislation passed today notes, “While the settlement agreement pertains to only five counties, its criteria establish a standard for providing indigent legal services that should apply statewide.”

In addition to the state providing full funding, the legislation passed June 17 now gives the ILS full authority statewide to: “(i) ensure the presence of counsel at the first appearance of any eligible defendant charged with a crime, (ii) establish caseload/workload regulations for attorneys providing mandated representation, and (iii) improve the quality of mandated representation.”

The legislation “provides equal justice for all New Yorkers, by extending to every county the state-funded reforms‎ already being implemented in five upstate counties under the Hurrell-Harring lawsuit settlement,” explained ILS Director, Bill Leahy. “It assures that those reforms will in fact be implemented, by vesting authority in the state Office of Indigent Legal Services (ILS) to issue rules and regulations governing their implementation.”

While there are countless New York advocates to be thanked that have tirelessly worked for decades to get the state of New York to meet its constitutional obligation to ensure that the indigent accused are provided effective representation at all critical stages of criminal proceedings, the passage of the new legislation is also a validation of the U.S. Department of Justice (DOJ) continued focus on America’s indigent defense crisis.

For it was DOJ’s Statement of Interest in Hurrell-Harring that established that a court does not have to wait for a case to be disposed of and then try to unravel retrospectively whether a specific defendant’s representation met the aims of the Sixth Amendment. As DOJ made clear, if state or local governments create structural impediments that make the appointment of counsel “superficial” to the point of “non-representation,” a court can step in and presume prospectively that the representation is ineffective. Enumerating a number of such structural impediments (e.g., “a severe lack of resources;” “unreasonably high caseloads;” “critical understaffing of public defender offices;” and/or anything else making the “traditional markers of representation” go unmet) very well may have been the critical event that made the state settle the lawsuit, and set in motion the events leading to the passage of the new legislation.