The devolution of the right to counsel in Wayne County, Michigan (Detroit)

Posted on April 24, 2018 by David Carroll Posted in Pleading the Sixth

Pleading the Sixth: A public defender office handling felony representation in Detroit was flat funded for 16 years. This despite a critical national report, an ACLU lawsuit, and comprehensive statutory reform, all intended to ensure effective representation of the indigent accused throughout Michigan. To say that this public defender office experienced flat funding, however, is a bit of a misnomer. Although Wayne County paid the same dollar amount each year, increases in workload and overhead expenses caused the amount available to defend each case to steadily decrease. So, in Detroit, attorneys with 20+ years at the bar earn just $35,000 annually to provide representation in murder cases, without any support staff including investigators, social workers, or paraprofessionals.  However, there is hope!

In response to these revelations and reform efforts organized by the Michigan Indigent Defense Commission (MIDC), Wayne County has secured two grants awarding state funds to bolster indigent legal services. If funded through the state’s appropriations process, one MIDC grant for $17.2 million will go toward addressing the main findings of the Sixth Amendment Center. A second MIDC grant of $901,371 is already funded and will provide a team of experts to determine how best to elevate Wayne County’s indigent defense delivery system in the future. “Although the findings of the report are troublesome, the process of standards-based assessment, deliberation and financial grants shows that the MIDC is effectively working with local funding units to rectify decades-old problems in the delivery of the constitutional right to counsel,” states MIDC Director Loren Khogali in a press release announcing the report and grants.

The State Defender Office (SDO) in Detroit, Michigan has only existed in its current incarnation since 2016, after its former parent organization Legal Aid and Defender Association, Inc. (LADA) was reorganized. LADA was founded in 1909 as a non-profit organization to provide legal services to poor people in civil actions, and it later began to provide criminal defense and juvenile representation. Since 1972, the Michigan Supreme Court has required that the SDO be appointed on a weekly basis to 25% of all indigent felony cases. In 1973, LADA began providing criminal defense services in federal courts.

In 2008 on behalf of the Michigan Legislature, the National Legal Aid & Defender Association (NLADA), in partnership with the State Bar of Michigan, evaluated trial level indigent defense representation throughout the state and found that all services – including those in Wayne County – were constitutionally inadequate. With regard to the SDO specifically, the statewide evaluation found that attorneys were working at nearly twice the workload allowed under national standards. The statewide evaluation coincided with the launch of an American Civil Liberties Union systemic class action lawsuit.

The evaluation and lawsuit led Governor Snyder to issue an executive order in 2011 creating the Indigent Defense Advisory Commission. The commission recommended comprehensive legislation that was subsequently passed by the legislature in 2013. The legislation created the Michigan Indigent Defense Commission as a state level body charged with drafting and implementing standards for the provision of effective assistance of counsel throughout the state. MIDC administers grants of state funding to the counties to ensure compliance with those standards. 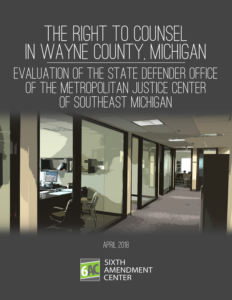 As the MIDC statute was being implemented, LADA began experiencing a diminution of funding across its various service areas, leading to significant corporate restructuring. LADA’s juvenile law group was affected first when its juvenile services contract was terminated in 2009. The civil law group was the next to see a reduction in funding when the federally funded Legal Services Corporation notified LADA in late 2015 that it decided against continuing to award funding to LADA.

In light of the reduced funding, in December 2015, LADA restructured its organization into four non-profit organizations, with the changes taking effect on July 1, 2016. At that time, the SDO was transferred to the newly created Metropolitan Justice Center of Southeast Michigan, although it continued under the same management as before.

From October 2000 through August 2016, Wayne County paid the same flat rate of $1,980,000 annually for the State Defender Office to handle 25% of all indigent felony cases in the Third Judicial Circuit. Wayne County did not increase funding for indigent defense representation by the SDO even after the 2008 NLADA report concluded that indigent defense services in Wayne County, and specifically the representation provided by SDO attorneys, were constitutionally deficient.

To say that the SDO experienced flat funding, however, is a bit of a misnomer. Although Wayne County paid the same dollar amount each year, two factors caused the amount available to SDO for defending each case to decrease.

Overhead expenses increased. In January 2007, LADA purchased for $12,640,000 the office building that currently houses the reorganized non-profit organizations. LADA did not have the financial resources to purchase the building outright and took out a mortgage. After the elimination of LADA’s juvenile division in 2009, each of the remaining three service divisions (civil, federal, and state) were allocated a separate floor of the building, so LADA divided up the monthly cost of the mortgage more or less evenly among them. Despite LADA’s allocation to the SDO of a whole floor, the SDO did not need as large a space as the federal and civil divisions because they had significantly fewer staff than each of those other divisions at that time. After the loss of LSC funding in 2015, even more of the mortgage cost was shifted to the SDO.

Then in 2017, the Office of the General Counsel for the U.S. Courts disallowed any increased fees and informed the parent organization that the federal Defender Services Office would obtain its administrative services from elsewhere. Thus, as of September 2017, the SDO was shouldering the vast majority of administrative costs too.

Workload increased. As a lessening portion of the amount paid by Wayne County was available to the SDO for representing indigent felony defendants, the actual number of felony cases handled by the SDO attorneys each year was steadily increasing. In August 2016, Wayne County and the parent organization entered into a new contract. In short, Wayne County began paying $300,000 more per year for the SDO to represent all indigent defendants on the welfare fraud and felony child non-support dockets, in addition to its representation of 25% of all indigent felony defendants. However, SDO’s parent organization did not use the new funding to hire additional SDO lawyers, as it expressly stated to Wayne County officials that it would do.

From the beginning of 2011 through the end of 2017, the Third Judicial Circuit’s felony appointments to the SDO increased from 2,528 appointments per year to 3,469. Now, the same 16 SDO attorneys are doing even more work, with no additional support.

The effects of underfunding

Although the SDO attorneys are increasingly asked to do more with less, they are poorly paid for their work. In the 17-year period from October 2000 through September 2017, only one salary increase occurred, circa 2003, raising starting level attorney salaries from $28,000 to $35,000 per year. Extremely low salaries have contributed to high turnover among the SDO attorneys, and some attorney positions have been left vacant for extended periods.

National standards, as summarized by the American Bar Association in the ABA Ten Principles of a Public Defense Delivery System, agree that a defense lawyer’s workload must be controlled to permit the rendering of quality representation. For example, national standards state that a lawyer handling felony cases should not be responsible for more than a total of 150 felony cases in a given year, and nothing else. In 2017, the SDO attorneys collectively handled 3,469 newly appointed cases, plus any cases appointed in previous years that had not concluded. The SDO’s 16 attorneys each had on average 217 new felony cases (or 145% of the national standard). And, the SDO does not have any social workers, investigators, paralegals, or interns on staff to aid the attorneys in conducting their work.

Moreover, the 16 SDO attorneys are contractually obliged to be in 29 different courtrooms on Monday through Thursday, and in 30 different courtrooms on Friday, for virtually the entire time those courts are in session. Five of these courtrooms are located 20 to 30 minutes away from the SDO offices. The limited number of SDO attorneys, combined with the large number of courtrooms to be covered, means that the same attorney rarely ever represents an indigent defendant from appointment through disposition of the case – another violation of national standards that severely impedes the effective assistance of counsel.

Providing the Sixth Amendment right to effective counsel is a state obligation under the due process clause of the Fourteenth Amendment. Although the U.S. Supreme Court has never directly addressed whether it is unconstitutional for a state to delegate this responsibility to its counties and cities, if a state chooses to place this responsibility on its local governments, then the state must guarantee that the local governments are not only capable of providing adequate representation but that they are in fact doing so. The State of Michigan has failed to ensure that Wayne County adequately funds felony representation. Although the state is to be commended for the comprehensive MIDC reforms, those reforms have yet to take root. The ultimate responsibility remains with the state.

This by no means lets Wayne County off the hook. Although the SDO’s parent organizations share blame for rarely submitting requests for additional funding from 2001 through 2015, the NLADA report in 2008 stated that felony services were constitutionally inadequate. By the time the MIDC legislation was enacted, Wayne County officials had already flat funded the defender office for more than a decade following the NLADA report, while the SDO’s costs rose every single year.

The MIDC legislation was designed to ensure that the state share the financial burden for indigent defense that the state is required to provide. Wayne County must continue to pay its local share amount, but the state must also recognize its responsibilities as mandated by the legislation.

There is no single cookie-cutter delivery model that guarantees effective indigent defense services in every jurisdiction. Jurisdictions must tailor the systems they use to meet unique local demands.The Michigan Indigent Defense Commission and Wayne County have an opportunity to reimagine how services can most efficiently and effectively be delivered.  The state and county have begun doing so.

Wayne County has already dedicated part of the $901,371 MIDC grant to retain former State Appellate Defender Dawn Van Hoek as a consultant to determine how indigent defense services can most effectively and efficiently be delivered. Specifically, the 6AC report recommends adding 75 additional personnel to adequately staff a public defender office handling 25% of the county’s felony caseload, including attorneys, investigators, and social workers. With the expected $17.2 million MIDC grant coming in October 2018 to fund these positions and to have the entire Wayne County indigent defense system meet MIDC standards, Van Hoek will help determine how best for the county to employ those new resources. Her work will be aided by a 6AC assessment of the assigned counsel system that presently handles 75% of the indigent felony cases. The study is expected to begin in June 2018.