The Sixth Amendment to the U.S. Constitution reads:

In all criminal prosecutions, the accused shall enjoy the right to a speedy and public trial, by an impartial jury of the State and district wherein the crime shall have been committed, which district shall have been previously ascertained by law, and to be informed of the nature and cause of the accusation; to be confronted with the witnesses against him; to have compulsory process for obtaining witnesses in his favor, and to have the Assistance of Counsel for his defence.

While the Sixth Amendment encompasses several important rights, the right “to have the assistance of counsel” is paramount among them. As the Supreme Court noted, “Of all the rights that an accused person has, the right to be represented by counsel is by far the most pervasive, for it affects his ability to assert any other rights he may have.”

Through the Fourteenth Amendment, states are required to provide due process and equal protection of the laws – including the Sixth Amendment — to all people. It says in part: “No state shall make or enforce any law which shall abridge the privileges or immunities of citizens of the United States; nor shall any state deprive any person of life, liberty, or property, without due process of law; nor deny to any person within its jurisdiction the equal protection of the laws.”

In 1963 in the case of Gideon v. Wainwright, the United States Supreme Court held that states have a constitutional obligation under the Fourteenth Amendment to provide Sixth Amendment lawyers to the indigent accused.

When States Must Provide Counsel

Early on, Gideon was presumed to apply only to felonies. The Supreme Court has since expressly clarified that the Sixth Amendment also requires the appointment of counsel for the poor in misdemeanors where jail time is actually imposed and in misdemeanors with suspended sentences. Additionally, children in delinquency proceedings, no less than adults in criminal courts, are entitled to appointed counsel when facing the loss of liberty.

The Rothgery Court carefully explained, however, that the question of whether the right to counsel has attached is distinct from the question of whether a particular proceeding is a “critical stage” at which counsel must be present as a participant. “Once attachment occurs, the accused at least is entitled to the presence of appointed counsel during any ‘critical stage’ of the postattachment proceedings . . ..” In other words, according to the Court, the Constitution does not necessarily require that defense counsel be present at the moment the right to counsel attaches, but from that moment forward, no critical stage in a criminal case can occur unless the defendant is represented by counsel or has made an informed and intelligent waiver of his right to counsel.

Over the decades, the Supreme Court has inch-by-inch delineated many events in cases as being critical stages, although it has never purported to have capped the list of events that may fall into this category. Events that are definitely critical stages are:

It is not enough for states to merely provide what some have referred to as a warm body with a bar card to stand beside an indigent person. Instead, the U.S. Supreme Court has held that the lawyer provided to represent an indigent person must also be effective. The Court has never directly considered whether it is unconstitutional for a state to delegate this constitutional responsibility to its counties and cities, but if a state does delegate the responsibility then it must guarantee that its local governments are not only capable of providing effective representation, but that they are in fact doing so.

Strickland uses a two-pronged test, applied after a particular case is final, to decide whether the lawyer provided effective assistance of counsel in that case. The Strickland test asks whether the lawyer’s actions were reasonable and, if they were unreasonable, whether those actions prejudiced the outcome of the case. Cronic explains that there are two other ways in which the right to the effective assistance of counsel is violated — by the actual denial of counsel, and by the constructive denial of counsel. 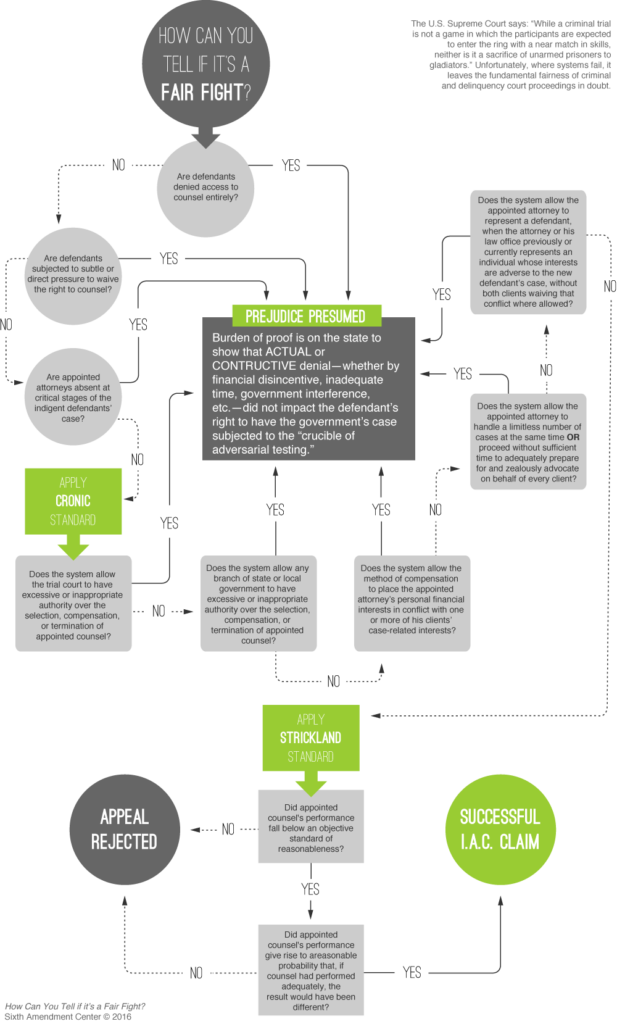 The first Cronic factor that triggers a presumption of ineffectiveness is the absence of counsel for the accused at the “critical stages” of a case. Arraignments, plea negotiations, and sentencing hearings, for example, are all critical stages of a case. If counsel is not present at every one of these critical stages, an actual denial of counsel occurs.

Next, the U.S. Supreme Court explains in Cronic that the effective assistance of counsel requires a fair fight – that is, the defense attorney must put the prosecution’s case to the “crucible of meaningful adversarial testing.” And, the Court noted, there can be circumstances that make any lawyer – even the best attorney – incapable of performing in an effective adversarial way. If a defense attorney is either incapable of challenging the state’s case or barred from doing so because of a structural impediment, a constructive denial of counsel occurs.11

Hallmarks of a structurally sound indigent defense system under Cronic include the early appointment of qualified and trained attorneys with sufficient time and resources to provide competent representation under independent supervision. The absence of any of these factors can show that a system is presumptively providing ineffective assistance of counsel.

Attorney qualifications, training, and resources. In Cronic, the Court points to the deficient representation received by the defendants known as the “Scottsboro Boys” in the U.S. Supreme Court case of Powell v. Alabama as demonstrating the constructive denial of counsel. The trial judge overseeing the Scottsboro Boys’ case appointed a real estate lawyer from Chattanooga, who was not licensed in Alabama and was admittedly unfamiliar with the state’s rules of criminal procedure. The Powell Court concluded that defendants require the “guiding hand” of counsel – i.e., attorneys must be qualified and trained to help defendants advocate for their stated interests.

Sufficient time. Having been assigned unqualified counsel, the Scottsboro Boys’ trials proceeded immediately that same day. Powell notes that the lack of “sufficient time” to consult with counsel and to prepare an adequate defense was one of the primary ways the Scottsboro Boys were constructively denied effective assistance of counsel, commenting that impeding counsel’s time “is not to proceed promptly in the calm spirit of regulated justice, but to go forward with the haste of the mob.” Insufficient time is, therefore, a marker of the constructive denial of counsel. The inadequate time may itself be caused by any number of things, including for example attorneys working under excessive workloads or contractual arrangements that create monetary incentives for lawyers to dispose of cases as quickly as possible rather than in the manner most effective for defendants.

Independence of the defense function. Perhaps the most noted critique of the Scottsboro Boys’ defense was that it lacked independence from governmental interference, specifically from the judge presiding over the case. The Powell Court said:

[H]ow can a judge, whose functions are purely judicial, effectively discharge the obligations of counsel for the accused? He can and should see to it that, in the proceedings before the court, the accused shall be dealt with justly and fairly. He cannot investigate the facts, advise and direct the defense, or participate in those necessary conferences between counsel and accused which sometimes partake of the inviolable character of the confessional.

As noted in Strickland, “independence of counsel” is “constitutionally protected,” and “[g]overnment violates the right to effective assistance when it interferes in certain ways with the ability of counsel to make independent decisions about how to conduct the defense.” In the 1979 case of Ferri v. Ackerman, the Supreme Court explained that “independence” of appointed counsel to act as an adversary is an “indispensible element” of “effective representation.” Two years later, the Court observed in Polk County v. Dodson that states have a “constitutional obligation to respect the professional independence of the public defenders whom it engages.” Commenting that “a defense lawyer best serves the public not by acting on the State’s behalf or in concert with it, but rather by advancing the undivided interests of the client,” the Court notes that a “public defender is not amenable to administrative direction in the same sense as other state employees.” The Cronic Court clearly advises that governmental interference that infringes on a lawyer’s independence to act in the stated interests of defendants or places the lawyer in a conflict of interest causes a constructive denial of counsel.

Cronic determined that, when a public lawyer works within a system where factors are present that constructively deny the right to counsel, then the public lawyer is presumptively ineffective. The government bears the burden of overcoming that presumption. The government may argue that, despite such conflicts, the defense lawyer in a specific case was not ineffective, but it is the government’s burden to establish this. As the Seventh Circuit Court of Appeals noted in Wahlberg v. Israel, “if the state is not a passive spectator of an inept defense, but a cause of the inept defense, the burden of showing prejudice [under Strickland] is lifted. It is not right that the state should be able to say, ‘sure we impeded your defense – now prove it made a difference.’” Only after the system within which public attorneys work is found to be structurally sound, as defined by a Cronic and Powell analysis, can Strickland’s two-prong test be used to retrospectively measure the effectiveness of specific attorneys who work within those structurally sound indigent defense systems.