Applying the Bill of Rights to state governments 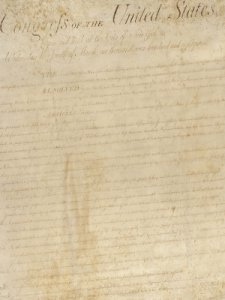 Well, as several historians and legal scholars have noted, the Framers of the Constitution had no intention of restricting the power of state governments through the Bill of Rights.[1] So, if the people of each state saw fit to subject their respective state governments to similar restrictions, they could do so on their own accord. Perhaps it says something about the importance our founding generations placed upon the right to a fair hearing that, in every new state to join the Union, the people of that state unilaterally chose to preserve the right to have the assistance of a lawyer in criminal prosecutions by adopting it as part of their respective state constitutions.[2] And that’s where the constitutional right to counsel was left, along with the rest of the Bill of Rights. That is, until the era of reconstruction that followed the Civil War.

The American Civil War ended in 1865. The Fourteenth Amendment was ratified three years later, in 1868. A host of historians and legal scholars believe its adoption was almost as important as the entire Bill of Rights itself. In particular, it’s the Fourteenth Amendment’s second sentence that they focus upon. It reads:

“No State shall make or enforce any law which shall abridge the privileges or immunities of citizens of the United States; nor shall any State deprive any person of life, liberty, or property, without due process of law; nor deny to any person within its jurisdiction the equal protection of the laws.”

As the lawmakers who crafted the language of the Fourteenth Amendment readily admitted, it was intended as a direct reversal of a 35-year old ruling of the Supreme Court.

The 1833 case, Barron v. Baltimore, was the first instance in which the Supreme Court confronted the argument that a state or a city government had violated one of the provisions of the Bill of Rights. In Mr. Barron’s case, he alleged that local government failed to compensate him for its destruction of his private property in violation of his federal rights contained in the Fifth Amendment. There, the Court ruled that the first ten “amendments contain no expression indicating an intention to apply them to the State governments. This court cannot so apply them.” So, in 1833, the Supreme Court confirmed what the original Framers of the Constitution had intended – that the Bill of Rights applied only to the federal government and not to any state. But the Civil War had changed dramatically the relationship between the federal government and the states.

With the adoption of the Fourteenth Amendment, Congress overruled the Barron decision and instead established that, from hence forth, certain portions of the Bill of Rights could be federally enforced against state governments. But the ability of the federal government to enforce certain portions of the Bill of Rights against the states left open the question of which rights would be enforced, and which rights would not. In a series of decisions handed down over the next several decades, the Supreme Court slowly but surely made clear its process for answering those questions – particularly how it would determine whether the Sixth Amendment right to counsel was an obligation of state government under the Fourteenth Amendment, or not.

The key Supreme Court ruling came in 1926, in Hebert v. Louisiana, where the court found that the due process clause of the Fourteenth Amendment only requires that “state action . . . shall be consistent with the fundamental principles of liberty and justice which lie at the base of all our civil and political institutions.” That’s the key for the right to counsel: is it a “fundamental principle of liberty and justice” that one accused of a crime has a right to the assistance of a lawyer in his defense? If so, then the Sixth Amendment is obligatory on state government by virtue of the Fourteenth Amendment.

[1] For an excellent analysis of the history of the Bill of Rights, see Amar, Akhil Reed. The Bill of Rights and the Fourteenth Amendment (Yale Law Review, 1992). See also William Beaney, The Right to Counsel in American Courts (U of Mich, 1955), at 28-33.