Drawing the line at actual imprisonment in Scott v. Illinois

When governments legislate that certain actions are against the law, they also set a maximum punishment that the courts are allowed to dole out for a violation of each law. Say, $25 for jaywalking. Maybe $500 plus 60 days in jail for petty theft. And maybe $1,500 plus a year in jail for an individual’s second DUI offense. Our laws and the available punishments are very specific. But these available punishments are only maximums. In most every criminal case, the judge will have considerable leeway in how he sentences the individual up to that maximum. This is the judge’s role, after all. He will consider the offense, the maximum sentence authorized under the law, and the need to protect the public, but will then weigh that against the particular circumstances of the individual standing before him – and he will consider all of these factors before determining the guilty person’s fate.

In the mid-1970s, the vast majority – somewhere in the neighborhood of 95 percent – of all misdemeanor convictions nationwide resulted in something other than jail time for the defendant. Even though judges were authorized under law to affix jail sentences, in their discretion they almost always chose a different outcome. Usually, this would be a modest fine, probation, community service, or some combination of those options. But this caused a bit of a dilemma in the immediate aftermath of Argersinger.

The Supreme Court had just drawn a giant red line, establishing jail time as the new threshold for the right to counsel. The Court said: “no person may be imprisoned for any offense, whether classified as petty, misdemeanor, or felony, unless he was represented by counsel at his trial.” But, no person was being imprisoned in 95 percent of misdemeanors, despite the availability of jail time as a potential sentence.

So here’s the issue: do defendants in these cases have a right to counsel as well, even if the judge has no intention of sentencing them to jail? Is it the threat of jail time that’s important under the Constitution? Or did the Supreme Court truly intend to hold the line at actual imprisonment? 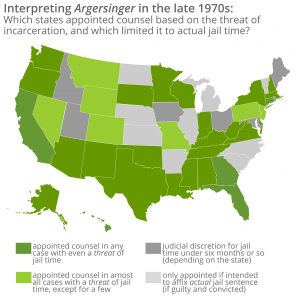 Many states – either because their legislatures or the courts interpreted Argersinger to mean that they were required to, or because they felt it was best for their citizens – provided counsel to defendants in any case where any amount of jail time was a potential outcome. By 1979, there were 27 such states.[1] But in the rest of the country, a different standard was applied. To be sure, some states required appointment in all cases with possible jail sentences except for the most minor (perhaps of a few days at most),[2] and others limited the right to counsel to cases where the judge was authorized to sentence the defendant to one month, three months, or six months in jail, depending on the state.[3] But, in the remaining states, the right to counsel extended only as far as actual imprisonment was concerned. Judges in those states were instead given discretion to appoint counsel at the beginning of the case if a conviction would likely result in some amount of jail time. (Click on the map to expand for easier reading.)

And so, perhaps it’s not surprising that only seven years after Argersinger, the question of the right of misdemeanor defendants to the assistance of counsel was brought before the Supreme Court once again.

In 1979’s Scott v. Illinois, the debate focused on the meaning of Argersinger’s central point: “no person may be imprisoned for any offense, whether classified as petty, misdemeanor, or felony, unless he was represented by counsel at his trial.” Did the Court intend for the right to counsel to attach in any case where jail time was “authorized,” regardless of whether the judge plans on sentencing the defendant to jail or not, or is it limited to only those cases where there is “actual imprisonment”? To the Court in Scott, “[w]hether this question was indeed ‘left open’ in Argersinger depends upon whether one considers that opinion to be a point in a moving line or a holding that the States are required to go only so far in furnishing counsel to indigent defendants.”

A moving line, in the constitutional sense, is dangerous. To the Court, earlier cases including Gideon and Argersinger had demonstrated “that constitutional line drawing becomes more difficult as the reach of the Constitution is extended further, and as efforts are made to transpose lines from one area of Sixth Amendment jurisprudence to another.” State laws are different from federal laws — they regulate different things and different actions. And so, no matter how sound the principle upon which it is founded, each new extension of a federal right to the states will have broader and broader ramifications. “As a matter of constitutional adjudication, we are, therefore, less willing to extrapolate an already extended line when, although the general nature of the principle sought to be applied is clear, its precise limits and their ramifications become less so.” In other words, our principles have limits.

Argersinger, when taken literally, had established the limit to the constitutional right to counsel at actual imprisonment. Extending it to the threat of imprisonment would be taking things a step too far. And so, with Scott, the Court clarified that states have no obligation to provide counsel to defendants facing potential jail time. Instead, the right to counsel attaches at the outset of misdemeanor cases only if the judge intends to affix a jail sentence if the defendant is found guilty.

Now, you might be asking yourself how a judge could possibly know whether or not a jail sentence is appropriate at the outset of proceedings. The government hasn’t even proven that a crime was in fact committed, let alone whether or not the defendant was the guilty party. So how could a judge jump ahead to the sentencing phase before the trial had even started? These basic logical inconsistencies were pointed out by members of the Supreme Court in their dissenting opinion in Scott. The problem for the trial courts was that there would now be a “necessity for time-consuming consideration of the likely sentence in each individual case before trial” and the risk of “attendant problems of inaccurate predictions, unequal treatment, and apparent and actual bias.”

Regardless of the procedural challenges Scott created, the constitutional line for appointing public counsel had been drawn at actual imprisonment. Next, we see the effect of the Court’s line-drawing on the lower courts in the post-Scott era.

[2] Colorado (all misdemeanors and all municipal code violations at the discretion of the public defender); Missouri (counsel should be appointed in misdemeanor cases of “more than minor significance” and “when prejudice might result”); Montana (court may assign counsel in misdemeanors “in the interest of justice”); Nevada (persons accused of “gross misdemeanors” or felonies); New Jersey (any offense which is indictable); Pennsylvania (in all but “summary cases”); and Wyoming (entitled to appointed counsel in “serious crimes” for which incarceration is a “practical possibility”, and in all cases where accused might be punished by imprisonment in the state penitentiary). See Justice Brennan’s dissenting opinion in Scott v. Illinois, 440 U.S. 367, 386 & n.18 (1979) (Brennan, J., dissenting).