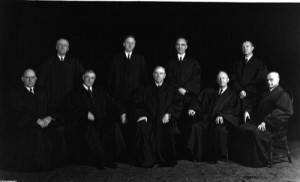 In the 1942 case, Betts v. Brady, the Supreme Court reviewed a felony conviction arising out of the state of Maryland in which the defendant had asked the judge to appoint counsel to assist him in his defense but, as the charge of robbery did not carry a potential death sentence, Mr. Betts’ request for counsel was denied by the judge. Recall that, at the time, while some states had established a requirement to appoint counsel in capital and felony matters, and others went so far as to require the appointment of counsel in misdemeanors too, such requirements did not exist everywhere. Instead, most states made an allowance for judges to appoint counsel when they felt circumstances demanded it. As the U.S. Supreme Court explained it in Betts: “The question we are now to decide is whether due process of law demands that, in every criminal case, whatever the circumstances, a State must furnish counsel to an indigent defendant. Is the furnishing of counsel in all cases whatever dictated by natural, inherent, and fundamental principles of fairness?”

There again we see the “fundamental fairness” test at the heart of the matter. Twenty-one years after rendering its decision in Betts, the Supreme Court reflected upon its own reasoning: “Plainly, had the Court concluded that appointment of counsel for an indigent criminal defendant was ‘a fundamental right, essential to a fair trial,’ it would have held that the Fourteenth Amendment requires appointment of counsel in a state court, just as the Sixth Amendment requires in a federal court.”

But, somewhat amazingly in retrospect, the diversity of right to counsel laws and statutes among state governments was evidence to the Betts Court “that, in the great majority of the States, it has been the considered judgment of the people, their representatives, and their courts that appointment of counsel is not a fundamental right, essential to a fair trial. . . . In the light of this evidence, we are unable to say that the concept of due process incorporated in the Fourteenth Amendment obligates the States, whatever may be their own views, to furnish counsel in every such case.”

The Fourteenth Amendment may have established certain federal rights as obligations upon state governments, but the right to publicly appointed counsel was not such an obligation. With the Betts decision, state governments were free to continue as they had before. Next, we discuss the state of the right to counsel in the post-Betts era, seeing just how diverse the various state right to counsel laws and statutes truly were at the time, and how the states were in fact paving the way — leaving the Supreme Court to play catch-up.