The lower courts in the post-Gideon era 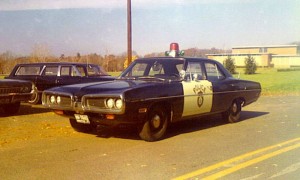 Every state crafts its own criminal codes, and each state does so differently from the next. An action that might be classified as a felony offense by the legislature in California, for example, might be a misdemeanor in Nevada. But generally, a misdemeanor is considered any offense that carries a maximum punishment of one year in jail, and a felony is anything punishable by more than one year in prison. And then, of course, there are a whole host of illegal actions that are punishable by a ticket or a fee. Often, the most minor offenses are violations of the laws and ordinances of city and county governments, such as jaywalking or loitering, rather than those set by the state legislature. As a result, the classification of all of these minor, less-than-misdemeanor offenses will vary not only from state to state but even from one town to the next, and so too will the range of punishments each one carries.

Without a doubt, examining the fluidity in how states today will distinguish misdemeanors from petty offenses or petty offenses from infractions is an incredibly tedious process – one we’ll leave for other groups to tackle elsewhere. But immediately following the Gideon decision, it was a topic of vital national importance. Questions of whether whole sets of constitutional rights should be afforded to individuals standing accused of certain types of crimes suddenly carried massive fiscal implications for state and local governments.

Four years following Gideon, in 1967, the President’s Commission on Law Enforcement and Administration of Justice released its report on the Courts, which estimated that in 1965 there were 314,000 individuals nationwide who were charged with felonies at the state court level (i.e., not including federal trial courts). By comparison, the Commission estimated somewhere in the neighborhood of four and five million people were charged with misdemeanors – 14 times the number as felony prosecutions. And then on top of that, there were an even larger number cases classified in the lower courts as “traffic offenses,” somewhere between 40 and 50 million, each of which may or may not have involved a moving vehicle (again, because there was no uniformity in how state and local governments classified low-level offenses, it is hard to be certain). These courts were handling at least 130 times as many traffic offenses as felony prosecutions each year. Today, it’s common to refer to the nation’s misdemeanor and traffic courts as the workhorses of the criminal justice system, but even in the 1960s – by sheer volume alone – that might have been a bit of an understatement.

To many lower courts, time alone had become a driving factor in their daily operations, and the administration of justice was essentially just plowing through as many cases as you could in a given day. Over the decades many courts expedited the judicial process by abridging certain rights for defendants accused of low-level offenses. Trials did not have to be held in public. The prosecution’s witnesses didn’t have to testify in person and be subjected to cross-examination. Trials didn’t have to be conducted before a jury, and could instead be conducted as a bench trial before the judge. The justification for each curtailing of defendants’ rights was that these were trials for “petty” offenses.[1] The less severe the potential penalty, the less applicable the due process rights for the defendant.

The results were predictable. “No findings of this Commission are more disquieting than those relating to the condition of the lower criminal courts,” the President’s Commission wrote in 1967. The crushing volume of cases requiring attention each day had resulted in widespread “conditions of inequity, indignity, and ineffectiveness” at addressing the needs of the individuals appearing before those courts. “There is little in the process which is likely to instill respect for the system of criminal justice in defendants, witnesses, or observers.”

Eventually, as the U.S. Supreme Court made certain federal rights applicable to the states, it clarified that they were applicable to “all criminal prosecutions.” In decision after decision, the Court held that defendants have a right to a speedy trial[2] and a public trial,[3] the right to be informed of the nature of the charges against them,[4] the right to confront and cross-examine their accusers,[5] the right to bring witnesses of their own and to have reluctant witnesses compelled to appear in court.[6] All of these federal rights were obligations in state trials, no matter how short the duration of the jail sentence imposed. But what of the right to have counsel appointed if the defendant couldn’t afford the cost?

Again, the answer to this question had massive financial implications for state and local governments for the simple reason that providing certain constitutional rights are less expensive than providing others. Requiring a sheriff’s deputy to issue a subpoena for a witness to appear in a misdemeanor trial, for example, is a fairly low-cost endeavor. Providing lawyers for poor people, however, was already proving to be a big-ticket item for many states. By 1970, seven years after the U.S. Supreme Court required access to counsel in state felony trials, local governments were already struggling to handle the increased cost. Many states even left it altogether unfunded.

Providing for right to counsel services: state and local systems begin to emerge 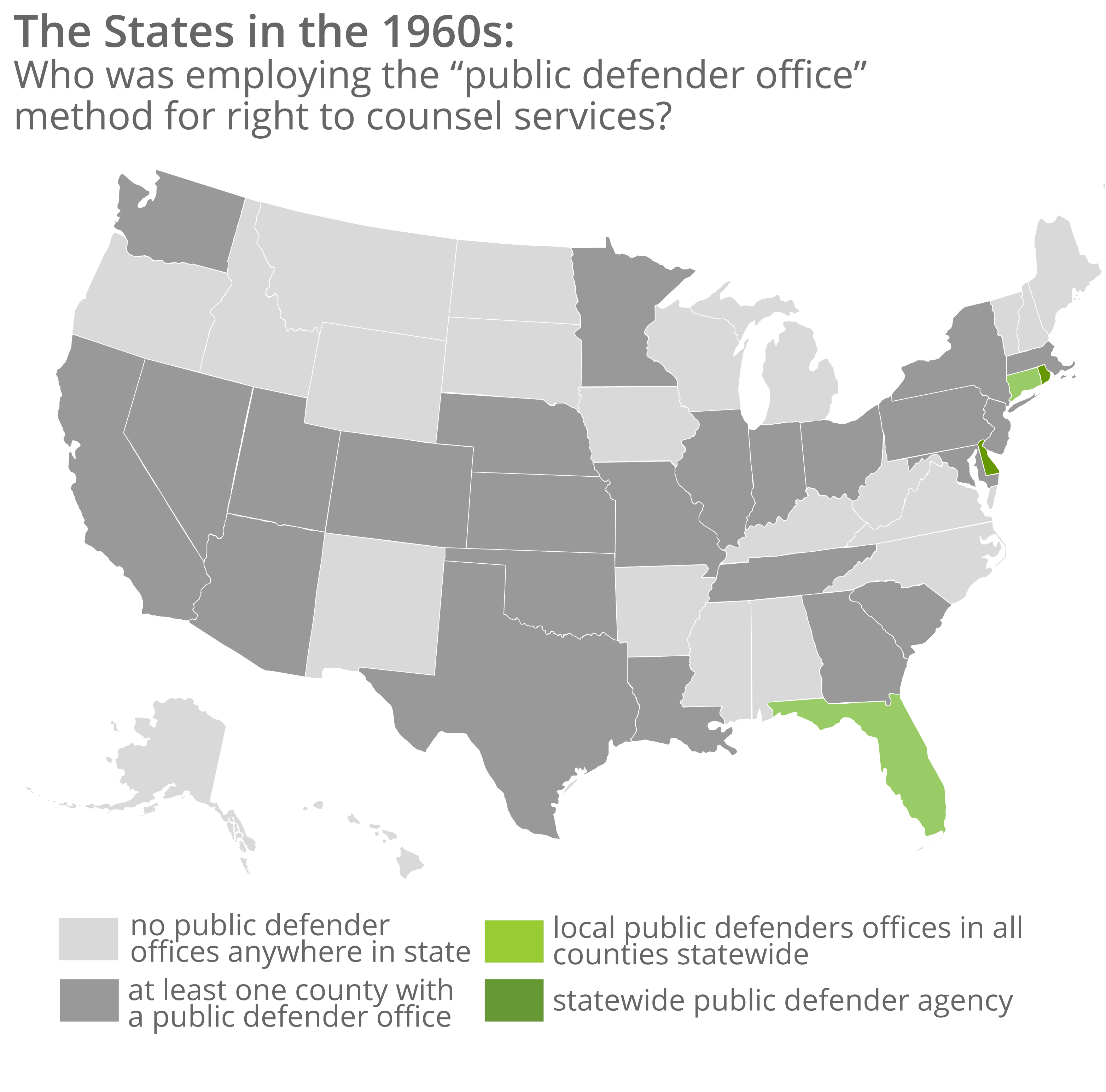 Following Gideon, there were two primary methods used to provide representation for felony defendants who couldn’t hire counsel on their own: public defenders and private attorneys. Rhode Island had already adopted the statewide public defender model (in 1945). Delaware, the District of Columbia, and Puerto Rico soon followed.[7] (Other states, such as Wisconsin, Indiana, Oregon, and Michigan, created statewide agencies to handle appeals in the late 1960s, but left counties responsible for trial-level representation. But we’ll cover the right to publicly appointed counsel in appellate matters down the road a bit.) And, even where no statewide agency existed for trial-level services, the public defender office model was nevertheless being used at the county level – primarily in larger, urban areas. Florida, for example, created 20 public defender offices mirroring the electoral boundaries of the state’s 20 district attorneys. Connecticut similarly maintained a system of eight county-based public defender offices, one for each county. And there were at least 22 additional states with at least one public defender office up and running by 1967, either as a county agency or a non-profit contracting with local government to provide services.[8] But that only accounted for about 200 of the 3,100 counties in the United States. The remaining 2,900-odd counties relied instead on private attorneys to represent felony defendants. (Click on the map above to expand for easier reading.)

Some states prohibited county governments from compensating appointed counsel for their time. Others provided attorneys’ fees for capital cases only.  And others still capped fees at absurdly low levels. Research published in 1967 studying the impact of the Gideon decision on state courts found there remained “a large number of relatively poor States and individual counties that cannot be expected to provide adequate compensation for counsel, or defender systems, no matter how hard they try.”

Despite the increased costs associated with providing attorneys for felonies alone and without prompting of the U.S. Supreme Court, by 1972, thirty-one states nevertheless extended the right to publicly appointed counsel to less serious offenses of some form or another.[9] But, importantly, the right was not applied uniformly across those states in all non-felony case-types. And, of course, the right to counsel was not available in non-felony cases whatsoever in the other 19 states.[10]

[7] Lee Silverstein, Manpower Requirements in the Administration of Criminal Justice. (This paper was submitted to, and included as an appendix to, the President’s Commission on Law Enforcement and Administration of Justice, Task Force Report on The Courts, at 158.) Silverstein includes Massachusetts and Connecticut in his list of statewide agencies. This, however, is factually incorrect. Connecticut’s eight part-time, county-based public defender offices hardly qualifies as a statewide system. Its replacement, the Division of Public Defender Services (still in operation today), would not be established until 1975. And Massachusetts’ Committee for Public Counsel Services would not be created until 1988.

[8] Silverstein’s list includes: Arizona, California, Colorado, Illinois, Indiana, Kansas, Louisiana, Maryland, Minnesota, Missouri, Nebraska, Nevada, New Jersey, New York, Ohio, Oklahoma, Pennsylvania, South Carolina, Tennessee, Texas, Utah, and Washington. And, according to Brownell, Emery A. Supplement to Legal Aid in the United States (NLADA, 1961), Appendix II at 90-95, as of 1960 there were an additional two states with at least one private, non-profit legal aid programs accepting criminal appointments at the county level (Georgia, with a legal aid office in Atlanta; and Massachusetts, with legal aid programs in Boston, Cambridge and Springfield). Presuming both states’ non-profit programs were still in operation at the end of the decade, the count of states with at least one county-based defender agency would increase to 24.

[10] Writing just a year following the Argersinger decision, one legal scholar analyzed the nine-year gap between Gideon and Argersinger, and noted that the question of whether Gideon’s mandate should be extended beyond felonies had been posed to the Supreme Court a few times in the interim. But each time, the Court passed on the overall question: “Undoubtedly one factor in the delay in resolving this question was the assumption, held by many members of the legal profession, that Gideon was already placing severe manpower and financial burdens on the legal profession and that the addition of misdemeanor representation for indigents might create such an overload of the system that it would collapse under the weight. Thus, even though the language employed by the Supreme Court in Gideon implied that the right to free counsel was probably guaranteed under the Sixth Amendment to at least some misdemeanants, the Court deferred a ruling on the exact extent of that right. The result of that decision in 50 states was predictable: a variety of different lines were drawn as to where the cut-off point came, and, with a few exceptions, the states adopted a rule which placed minimal demands on the public treasury.” Barton L. Ingraham, The Impact of Argersinger – One Year Later, 8 Law & Soc’y Rev. 615, 616 (1974). Our analysis of statutory changes offered in advance of Argersinger leads us to believe this analysis is perhaps overly harsh – despite the added cost, the majority of states unilaterally extended the right to counsel beyond Gideon’s mandate, even without Argersinger yet requiring it – but it is nevertheless an important perspective to take into account.