The post-Betts era in the states’ courts

In 1942, the United States went off to war against Japan and Germany, the Supreme Court handed down its Betts decision, and the individual states went back to the task of sorting out just what this right to counsel actually provides to the accused. Some states addressed it by statute, and others looked to the state courts. Just after the conclusion of World War II, there was a rash of state supreme court cases on this topic, decided between 1946 and 1951.

Here’s the situation. With the exception of Virginia, each state in the Union had a long-standing constitutional right to the assistance of counsel.[1] But only in six states – California, New York, Indiana, Georgia, Nevada, and New Mexico – did the state courts affirmatively interpret the right to counsel in their respective state constitutions to a degree comparable to that of Johnson v. Zerbst, meaning the government was obliged to provide for counsel in criminal cases at public expense.[2] Everywhere else, the states’ supreme courts found this to mean the right was limited merely to permitting the defendant to hire and appear in court with counsel,[3] or the argument wasn’t even raised to the court’s attention. And thus it was left to the legislatures to pick up the mantle.

Most state legislatures did just that, extending the statutory requirement to appoint counsel beyond capital cases. In fact, by the latter half of the 1950s, only eight states limited the requirement of appointing counsel to capital cases alone.[4] (See the map below. Click on the map to expand in new window.) Add to that another state that required courts to appoint lawyers to represent defendants facing a possible life sentence in prison, in addition to capital cases.[5] And another set the limit to any sentence of at least three years in prison.[6] These ten states had the most restrictive policy for appointment of counsel where the defendant couldn’t afford the cost himself. 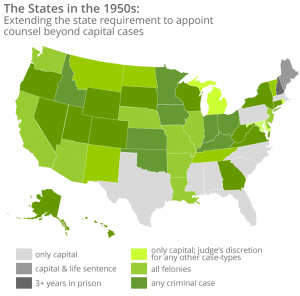 And so, despite the U.S. Supreme Court’s decision in Betts, holding that the right to counsel was not a fundamental right, essential to fair trials in criminal cases, the vast majority of state governments had gone in the completely opposite direction.

As evidence of just how important that right had become, consider this: the 1950s closed with Alaska and Hawaii joining the Union as our country’s 49th and 50th states and, as U.S. territories, their citizens had been fully protected by the Sixth Amendment rights under federal law. But, upon entering the Union in 1959, both would immediately lose those protections because Betts held that, as new states, the old federal right to counsel had no application.

No wonder the people of Hawaii, in their first state constitution, crafted their own right to counsel, and included the words: “The State shall provide counsel for an indigent defendant charged with an offense punishable by imprisonment.”

Times were changing, but some states still lingered behind. Florida was one of those states. Next, we tell the story of how the U.S. Supreme Court did an about face and how, through the story of a middle-aged Floridian named Clarence Earl Gideon, the Court embraced the notion that access to a lawyer is indeed fundamental and essential to fair trials.

[1] Even in Virginia, where there was no constitutional guarantee, the right to retain counsel was established at the very least through a state court decision in 1948. See: Stonebreaker v. Smyth, 187 Va. 250 (1948).

[2] See William Beaney, The Right to Counsel in American Courts (U of Mich, 1955), at 82-83. Beaney actually asserts that the list of states having court decisions to this effect, whereas no others did, is actually seven. He includes Nebraska in his analysis, citing to Alexander v. O’Grady, 137 Neb. 645 (1940). But having reviewed Alexander v. O’Grady ourselves, along with Roberts v. State, 145 Neb. 658 (1945), we conclude that neither case warrants Nebraska’s inclusion in this list (in Alexander, the court was interpreting a 1929 statute requiring the appointment of counsel in capital and felony cases – holding that such a right that could be waived upon pleading guilty). So we only retain the remaining six states in Beaney’s list: California, Georgia, Indiana, Nevada, New Mexico, and New York. We relied heavily on Beaney’s book for the historical record of contemporary state criminal codes and case law, in addition to our own research at the Law Library of Congress.