The right to counsel in federal trials in Johnson v. Zerbst 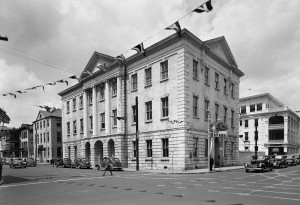 Two U.S. Marines were on leave in Charleston, South Carolina, in 1934, when they were arrested, accused of using counterfeit money – a felony offense under federal law.[1] Each was able to scrape together the cost of a lawyer for their preliminary hearing before the judge. And then they sat in jail for two months, being unable to afford the cost of bail, while waiting for the grand jury to return a formal indictment. Finally, in January 1935, they were taken to court for their arraignment. But having already spent what remaining money they had, neither could afford the cost of a lawyer for the trial. When they asked for a lawyer, the district attorney told them they could only be appointed a public lawyer under South Carolina law if they had been charged with a capital crime,[2] which of course counterfeiting was not. So they proceeded to represent themselves during the trial that same day, were convicted, and sentenced to four-and-a-half years in federal prison. Their names were Bridwell and Johnson. Johnson’s case was eventually appealed all the way to the U.S. Supreme Court.

Six years after the Court’s ruling in Powell v. Alabama, the 1938 case of Johnson v. Zerbst was the Court’s first major use of the “fundamental fairness” test that it had established in Powell. There, the Sixth Amendment right to counsel was “deemed necessary to insure fundamental human rights of life and liberty. . . . It embodies a realistic recognition of the obvious truth that the average defendant does not have the professional legal skill to protect himself when brought before a tribunal with power to take his life or liberty . . . .”

But the question posed of the Court in Johnson v. Zerbst was not related to state trials. Instead, it was related to federal trials heard before U.S. District Court judges and juries.

At the time, the federal criminal courts followed what the Supreme Court described as “humane policy of the modern criminal law” by appointing counsel in most cases based on the judge’s discretion. But here, the Court construed the Sixth Amendment guarantee of counsel to mean that, in federal courts, counsel must be provided for defendants unable to employ counsel in all trials, unless the defendant makes a competent and intelligent waiver of that right and instead chooses to appear in court without representation. Instead of “the court may appoint counsel”, the Supreme Court expanded the Sixth Amendment to mean: “the court must appoint counsel in criminal cases.”

Interestingly, there was as of yet no authority from Congress to compensate appointed counsel for their services or litigation expenses in federal trials. So, federal judges depended on the professional obligation of lawyers to provide free representation to defendants unable to retain counsel. They called it “pro bono publico,” which translated from Latin means “for the good of the public.” This system of pro bono representation lasted until Congress passed the Criminal Justice Act of 1964, establishing the Federal Public Defender System. But, we’re getting ahead of ourselves here….

[2] Until the first Federal Rules of Criminal Procedure were put into effect in 1946, the federal courts applied the procedural laws of the state in which they sat  See Section 34 of the Judiciary Act of 1789. See also Johnson v. Zerbst, at 460-461: “In the habeas corpus hearing, petitioner’s evidence developed that no request was directed to the trial judge to appoint counsel, but that such request was made to the District Attorney, who replied that, in the State of trial (South Carolina), the court did not appoint counsel unless the defendant was charged with a capital crime. The District Attorney denied that petitioner made request to him for counsel or that he had indicated petitioner had no right to counsel.”