The story of the Scottsboro Boys in Powell v. Alabama 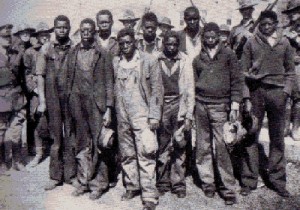 In March 1931, a large number of kids and young adults hopped aboard a freight train in Chattanooga, Tennessee.[1] Shortly after the train crossed into northern Alabama, a fight broke out between a group of seven white boys and a larger group of black teenagers, with almost all of the white teenagers being thrown off of the slow-moving train. Word was sent up ahead, and when the train arrived near the town of Scottsboro, Alabama, a sheriff’s posse was waiting. There, two white girls, who were also stowed away on the train, claimed that they had been raped by six black youths. In 1930’s Alabama, rape was a capital offense. The posse arrested nine of the young men of color. They were all between 13 and 19 years old. With each sensational account appearing in the local papers, the community’s outrage spread like brushfire. Fearing the growing mob outside, the sheriff called in the local militia to help protect the defendants day and night. At arraignment, they each pleaded not guilty of the charges against them. Their trial began just a few days later.

At the time of the Scottsboro Boys’ trial, even without the mandate of the federal government, every state in the Union had established the right to have the assistance of counsel similar to that found in the Sixth Amendment.[2] But, many states went further, and to some extent provided access to free legal representation in certain criminal matters. In fact, by statute, by court decision or, in some states, just by long-standing practice, at least seven states had established an obligation to appoint counsel to assist any defendant, in any type of case, who could not afford the cost of representation on his own accord. Other states had established a similar obligation to appoint counsel in felonies or certain serious felonies.[3] But every state required the appointment of counsel in capital cases. Alabama in the 1930’s was no exception.

So, with the Scottsboro Boys accused of a capital crime, it was typical that the judge’s first point of order was to appoint counsel to represent the defendants at trial, which began only twelve days after the incident aboard the train. The judge appointed a real estate lawyer from Chattanooga, who wasn’t licensed in Alabama and was admittedly unfamiliar the state’s rules of criminal procedure, along with a retired local attorney who hadn’t practiced in years to represent all nine co-defendants. Having thus been assigned counsel, the trials proceeded immediately that same day. Over the course of the next three days, four separate all-white juries, trying the defendants in groups of two or three at a time, found all nine of the Scottsboro Boys guilty as charged, and all but one was sentenced to death. The youngest – only 13 years old – was instead sentenced to life in prison.

Feeling justice was not done, members of the legal community helped the Scottsboro Boys appeal their case all the way to the U.S. Supreme Court, claiming that their rights to a fair hearing and to have the assistance of counsel, as guaranteed under the Bill of Rights, were violated because their attorneys were given no opportunity to prepare for the trial. The Court heard their appeals as one consolidated case – Powell v. Alabama – in 1932.

(Image of the Scottsboro Boys, via Mayfield’s Wiki.)

[2] As of 1931, there were only 48 states in the Union (Alaska and Hawaii would not join until 1959). Of those 48 states, only Virginia’s state constitution omitted a right to the assistance of counsel. Nevertheless, “in 1786 Virginia enacted a statute which allowed the accused to retain counsel to assist him at the trial.” (William Beaney, The Right to Counsel in American Courts (U of Mich, 1955), at 19.) Beaney’s 1955 book was invaluable to us in researching the historical and then-contemporary laws of the states (prior to Gideon).