In holding that the right to the assistance of counsel is a guarantee of our federal Constitution, in Gideon v. Wainwright, the U.S. Supreme Court made that right obligatory on state governments by virtue of the Fourteenth Amendment – it was not an obligation of the courts, nor the duty of the legal profession, but the states. As the decades have passed since 1963, this tiny portion of the decision has proven significant.

You see, for much of our country’s history, state governments had been allowing access to representation for those who couldn’t otherwise afford it. But, just like there was no uniformity from one state to another in the types of cases in which counsel would be provided, so too was there no uniformity in who was responsible for the cost of this representation. In some states, the state itself would pay for appointed counsel’s fees. Elsewhere, the state had mandated or a state court decision had held that the county in which criminal charges were brought was liable for the cost of representation. In other states still, it was left to the legal profession to accept appointments in criminal cases without pay, as part of their duties as officers of the court.

The reliance on pro bono representation had worked for the first century of the country’s existence, and then some, simply because there just weren’t that many criminal cases in which representation was required. In most every state, up until the latter half of the nineteenth century, crimes classified as felonies, by definition, were potentially punishable by death. An 1852 Indiana statute, for example, required that anyone found guilty of robbery was to be punished as though they had committed murder. An 1873 Nevada law treated dueling with . . . well, anything from a shotgun to a shovel as a capital offense.[1] And in 1890s Oklahoma, the drunken administration of medicine by a physician could result in capital charges, depending on whether or not . . . you know . . . the medicine worked and the patient lived.[2] So, by allowing for representation in any capital case, for most of the 1800s most states were in fact allowing for representation in anything more serious than a misdemeanor.

Only as statutes were amended to limit the number of offenses in which death was a potential sentencing outcome, did the dividing line between providing counsel in capital cases versus felonies become an actual difference. But while the list of offenses that carried a potential death sentence was decreasing in number during the first half of the 20th Century, many states left the wording of their right to counsel laws alone – appointment was limited merely to cases with capital charges. With fewer and fewer cases to handle, the overall burden on the private defense bar to represent defendants in these cases, without expecting compensation for their efforts, was fairly small.

Thirty-five states, though, felt it important to provide representation in felony matters anyway, even after being told by the U.S. Supreme Court in 1942 that there was no such obligation. In 1959, Alaska and Hawaii increased the list to 37 states. And most of those even provided representation in less-serious criminal cases as well. So the list of cases in which the courts needed able attorneys to represent defendants was actually increasing in most states.

Compounding the problem was that the legal profession had started to specialize. In medicine, there are doctors who specialize in brain surgery, or pediatrics, and family practice. The same thing was happening in the legal profession, but by the middle of the 20th Century, most of the lawyers were specializing in something other than criminal law.[3] And so, the pool of available lawyers who had the skill necessary to match up against professional prosecuting attorneys was growing smaller and smaller.

The comparison between the medical and legal professions worked once before, so let’s try it again. Doctors give out free medical advice or care all the time. Why is it too much to ask lawyers to do the same? Well, in the case of doctors, they can put aside small amounts of time each day or week to care for the needy and still maintain a fairly decent annual income. Once a lawyer is appointed to a criminal case, however, he has to see it through to its conclusion, which can take weeks, if not months. In the meantime, it takes a significant amount of time to prepare for the trial – collecting evidence to counter the government’s evidence, interviewing witnesses, crafting motions, scouring the criminal code for any potential defenses available to the client – and then it’s time to conduct the trial. So, for many lawyers, taking on several of these cases in a given year means they have less time to devote to paying clients. Taking on hundreds could lead to bankruptcy.

A report published in 1951 showed that in 38.2 percent of all counties nationwide, defendants were either represented by unpaid lawyers or unrepresented entirely, and in another 18.6 percent of counties, lawyers were only paid for handling capital cases.[4] So in most of the country, unless you were accused of a crime that came with a potential death sentence, your lawyer (if you were lucky enough to get one) was representing you for free. And where lawyers were paid some amount by the government, they simply couldn’t keep up with the growing demand. In total nationwide, somewhere in the neighborhood of 60 percent of all felony defendants each year were left to face criminal prosecutions without the assistance of a lawyer.[5] So, there was a growing concern that perhaps expecting the legal profession to simply eat the cost on all of these cases wasn’t going to work for much longer. 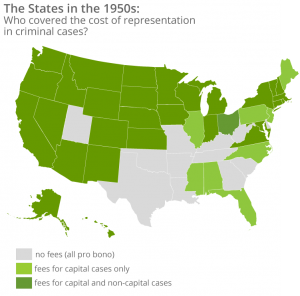 By the late 1950s, only 12 states remained which had no statutory provision for compensating private attorneys appointed to represent criminal defendants.[6] (See map. For easier reading, click on the map to open an expanded view.) Eight states limited payments to capital cases only.[7] The remaining 28 states provided pay for private attorneys handling capital and non-capital cases, although some limited non-capital case fees to felonies only.[8] And the rates of pay for the attorneys handling appointed cases in most of these states was such that most of the work fell to less-experienced attorneys, or to the less-successful veteran attorneys.[9] And almost everywhere the responsibility to pay for the cost of for these services fell to county governments. So local policymakers started looking around to see what counties in other states were doing.

Some counties, particularly in urban areas, had been tinkering with the idea of professionalizing the criminal defender. Perhaps it was borne out of the idea that there needed to be a zealous advocate for the people – something better than merely accepting that all case assignments should fall to the lowest ranks of the private criminal defense bar – or perhaps the incentive had more to do with finances. Whatever the reason, the idea of a professional “public” defender started cropping up all over the country.

(Image of historic courthouse in Washoe County, Nevada, via OnlineNevada.org.)

[3] William Beaney, The Right to Counsel in American Courts (U of Mich, 1955), at 215: “A further difficulty arises from the well-known tendency of modern lawyers to avoid criminal practice . . .”.