Clara Shortridge Foltz, California’s first female lawyer, came up with the idea of a defense office for the public as a counterbalance to the office of the public prosecutor. After introducing the idea to the nation in a speech at the 1893 Chicago World’s Fair, she lobbied long and hard for state governments to adopt her “defender bill.”  But it was in her adopted home state of California that the public defender movement finally took root.

Before the model was shown to be successful in California, a variation of the theme – a law firm dedicated to the poor – actually predated it on the other side of the country. The Legal Aid Society, a New York City non-profit organization founded in 1876 to provide legal assistance to immigrants in civil matters, had been defending the city’s poor who were accused in criminal cases as early as 1910. More and more urban counties began establishing public defender agencies of their own based on what was happening in New York and L.A. In Memphis, the Shelby County Office of the Public Defender was established in 1917. And in Chicago, the Cook County Public Defender began serving clients in 1930.[1] 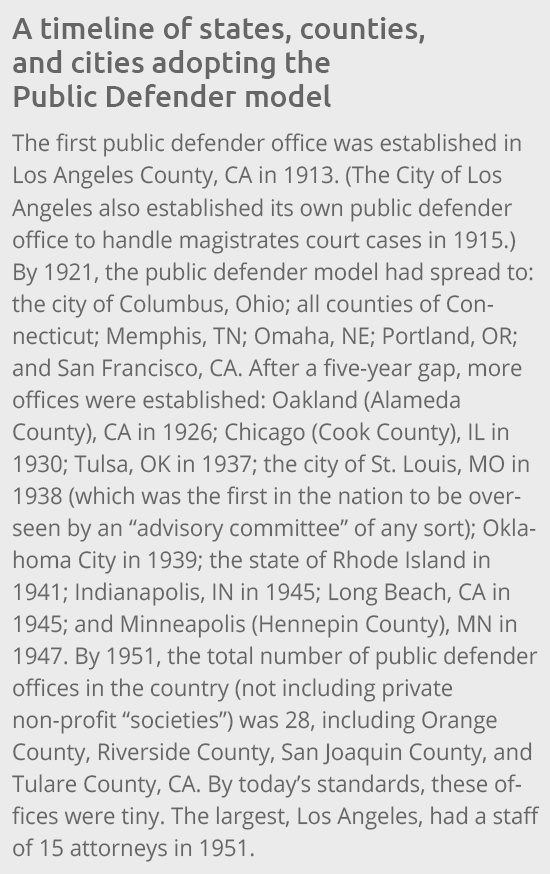 part-time). By the late 1940s, a number of state legislatures had authorized local governments to provide defense services by a method of assigning all cases to a single individual who was to be called the public defender. (See side bar.) This county or city public defender was either appointed by the county judge, appointed by the county board of supervisors, or elected by the local populace in the same manners as local district attorneys. They would serve for set terms – maybe one year, four years, or five years – and they would receive annual or monthly salaries, or sometimes per-case fees. It all varied, as did the rate in which counties within these states adopted this new appointed public defender model.

The use of this public defender model – both in the smaller-county, single-attorney iteration as well as the version used in the larger, urban areas that were establishing rather large-scale law offices – was a source of major controversy even as far back as the early 1930s. Just as it was catching steam in some places, elsewhere there was a huge backlash. Members of the private bar railed against the public defender model, arguing:

A well-organized opposition movement of the local private bar used these exact arguments in 1931 to derail efforts to establish a public defender office in Cleveland, Ohio. By the late 1940s, suffice to say the controversy had not exactly diminished. Proponents of the public defender model countered that the appointed counsel model had either been converted into a rabid political patronage system, with elected judges handing out case assignments to their allies in return for campaign contributions or, in states and counties where attorneys were paid laughably low amounts for taking cases, the only lawyers the judges could get to take the case-assignments most likely were the inexperienced or the unqualified.

Nevertheless, even while the public defender model was being developed in California, some places began trying to formalize the traditional reliance on the private bar into something more resembling of an actual plan. The New Jersey Supreme Court, for example, adopted a court rule requiring all counties to establish rosters of attorneys accepting appointments in their courts, organized in alphabetical order, and to assign cases one-at-a-time to each attorney. The goal was to address the primary criticisms against the private bar model.[2] One contemporary called it the “most ambitious effort to date to retain the traditional system.”

But regardless of the method used, and with only a few exceptions, where states or their courts authorized the payment of attorney fees for handling court-appointed cases, the actual burden of paying those bills fell almost entirely to the county governments. Only after the Supreme Court’s ruling in Gideon v. Wainwright in 1963 did this really start to change.

The change of course wasn’t felt immediately. See, Gideon was in fact just the first crack in the dam. When it came to state governments taking over the burden from the counties and the courts for figuring out how best to provide right to counsel services, as well as for providing funding for those services, it would take another U.S. Supreme Court case a decade later to bust the dam wide open. But we’ll get there soon enough.

Next, we take a break from our discussion of the rights of adults in criminal cases and turn to the rights of children in the juvenile courts system.

[1] We relied heavily on two books, in addition to our own research at the Law Library of Congress, for the historical record of state and local governments adopting the public defender model: William Beaney, The Right to Counsel in American Courts (U of Mich, 1955); and Emery A. Brownell, Legal Aid in the United States: A Study for the Availability of Lawyers’ Services for Persons Unable to Pay Fees (1951, supplemental 1961).

[2] Regarding the criticisms of political patronage, rotation of appointment by alphabetical list removes the ability of judges to assign an excessive number of cases to their allies. Regarding the reliance elsewhere of the lesser attorneys, the rotation model spreads out the caseload so that the overall burden each attorney is diminished. So it basically came down to: “we still can’t pay you enough, but you’ll lose less money this way than before.”