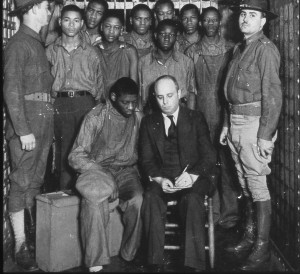 Far from a radical expansion of the right to counsel, the Supreme Court’s decision in Powell v. Alabama was rather narrow. In Alabama, trial courts were obliged, under state statute, to appoint counsel in capital cases whenever the defendant is incapable of hiring an attorney on his own. By assigning two lawyers to represent the nine Scottsboro Boys, the trial judge complied with the letter of the law. To the U.S. Supreme Court, it wasn’t Alabama’s statute that was the problem. Rather it was the trial court’s failure to grant a fair hearing: the attorneys appointed to the Scottsboro Boys’ defense were so unqualified that the representation the defendants received was effectively the same as if they had received no representation at all.

The right to be heard would be, in many cases, of little avail if it did not comprehend the right to be heard by counsel. Even the intelligent and educated layman has small and sometimes no skill in the science of law. . . . Left without the aid of counsel, he may be put on trial without a proper charge, and convicted upon incompetent evidence, or evidence irrelevant to the issue or otherwise inadmissible. He lacks both the skill and knowledge adequately to prepare his defense, even though he have a perfect one. He requires the guiding hand of counsel at every step in the proceedings against him. Without it, though he be not guilty, he faces the danger of conviction because he does not know how to establish his innocence.

Therefore, in order to protect an individual’s constitutional right to a fair hearing, the Court held that in capital cases, state trial courts have an obligation under the Fourteenth Amendment to appoint counsel.[1] Looking back to the 1926 case, Hebert v. Louisiana, the Court justified its decision by saying: “. . . To hold otherwise would be to ignore the fundamental postulate . . . ‘that there are certain immutable principles of justice which inhere in the very idea of free government which no member of the Union may disregard’.” The Scottsboro Boys had been provided with representation, but it was so superficial as to be meaningless. They would be granted a new trial, and this time with the assistance of effective defense counsel.

The immediate impact of Powell v. Alabama was fairly limited, because every state already required courts to appoint counsel in capital cases. Instead, Powell‘s lasting legacy is that it established a test, based on the idea of “fundamental fairness,” that would guide the Court over the next 50 or so years as it continued to explore the constitutional obligations of government to provide counsel to defendants who couldn’t otherwise afford it. And it wouldn’t be very long before this fundamental fairness test came into use.

[1] See Powell at 71: “All that it is necessary now to decide, as we do decide, is that, in a capital case, where the defendant is unable to employ counsel and is incapable adequately of making his own defense because of ignorance, feeble mindedness, illiteracy, or the like, it is the duty of the court, whether requested or not, to assign counsel for him as a necessary requisite of due process of law, and that duty is not discharged by an assignment at such a time or under such circumstances as to preclude the giving of effective aid in the preparation and trial of the case.”